Elisabeth Dahl is the first-time author-illustrator of Genie Wishes (Amulet, 2013). From the promotional copy:

From the first day of school, Genie knows there will be good, bad, and in-between.

The good? She’s in homeroom with her best friend, Sarah.

The bad? Sarah’s friend from camp, Blair, is a new student at their school, and is itching to take Genie’s place as Sarah’s BFF.

The in-between? Genie is excited to be elected to write her class’s blog, where she’s tasked with tracking the wishes and dreams of her class. But expressing her opinion in public can be scary—especially when her opinion might make the rest of her class upset.


Elisabeth Dahl authentically captures the ups and downs of a tween girl’s life, and the dramas—both little and big—that fill the scary transition between childhood and adolescence.

I work as an editor and copyeditor myself, so I’ve always believed in the revision process. It’s as difficult to significantly revise your own work as it is to cut your own hair–try as you might, it’s hard to get the proper amount of distance and perspective.

While I’d revised Genie Wishes with critique partners in the pre-query-letter months, the story didn’t get a major reshaping until I started working with an agent.

Originally, I’d envisioned this as a series, and I’d written the first two books. My then-agent (the wonderful Marissa Walsh, who has since left the agenting business) explained that publishers were often reluctant to buy a series by a debut author, and that made sense. So I combined the first two books into one, reshaping significantly as I went.

I also changed the timeline of the book to run for an entire school year rather than just a spring semester.

Then the book went on submission. Editor Maggie Lehrman at Abrams was interested but not quite ready to buy the manuscript. Marissa arranged a phone call for me with Maggie, who explained her thoughts about the manuscript, such as why she didn’t think a certain subplot was working. Over the next couple of months, I revised further. Marissa sent the book back to Maggie. And then Maggie made an offer.

By the time the book was under contract, a lot of the revision Maggie wanted to see had already happened. It was sort of like that phone call had been my first edit letter. So the real first set of notes that Maggie sent was relatively short.

When I started this process, I was a strong writer at the sentence level, and I had a good sense of character and voice. What I needed was help with story development and shaping, and Marissa and Maggie provided that in spades. The revision process could have been rough had I not had such kind, intelligent, patient advisers.


As an author-illustrator, you come to children’s books with a double barrel of talent. Could you describe your apprenticeship in each area, and how well (or not) your inner writer and artist play together? What advice do you have for other interested in succeeding on this front?

Within the first day–probably the first hour, even–of writing Genie Wishes, I was doing a line drawing to go with the text. I’m not a professional illustrator, but words and images have always been tightly bound together for me.

The drawings made the project feel whole and lively right from the start, and I reasoned that if they had that effect on me, they’d probably have that same effect on readers. I liked that the person creating the character was also creating that character’s images.

(More generally, I love it when stories have any kind of visual component. As a child reader, I was always captivated by images and would dreamily dwell on them when I needed a break from reading. I wish more adult fiction had illustrations, actually.)

I worried that perhaps a publisher would want the story without the illustrations, but fortunately Maggie and Abrams came along. She didn’t just like the line drawings; she asked for more. 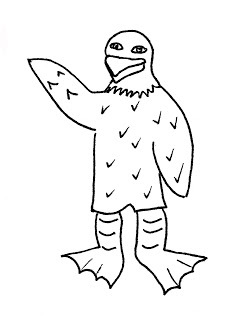 Anyone else interested in succeeding on this front should give it a try!

The worst they can say is “no,” right?