When I was a young, I lived in a little red house on a tree-lined street in a suburb of New York City. Today, anyone passing by that house might not blink as it was about as ordinary as sliced bread.

But to me, that little house will always be a magical place. It was the place where all of my childhood memories began.

Most of those memories were delightful, like riding my tricycle at full speed down the hill in front of our house, or believing that I had heard Santa’s sleigh bells out my bedroom window on Christmas Eve, or that I could dig a hole with a spoon all the way to China.

But other memories were dark and scary, like trying to make a run for my parent’s bed between a loud crack of thunder and the next flash of lightning, or being chased by spider-wielding brothers whose sole mission was to torment me until I cried.

Those defining childhood memories, both delightful and dark, have
provided a treasure chest of ideas for the picture books I write,
especially my new book, Bug Patrol (Clarion, 2013), which was inspired by that awful memory of being chased by spiders. 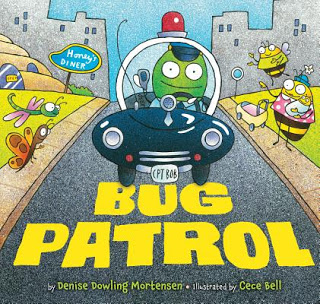 In my four-year-old mind, I believed that bugs were an uncivilized bunch of marauders and that I was their constant target. Since this was such a powerful, visceral memory and it was so close to my heart, I assumed that there would be four-year-olds today who would share that same irrational fear.

So I flipped that fear on it’s head (I did not want to re-create that same anxiety in my readers) and used it as the basis for writing Bug Patrol. The book needed to be lighthearted and fun. It would need to depict bugs in a positive way.

I found my voice in Captain Bob, a friendly bug cop who presides over a world in which bugs are simply miniature versions of our human selves: they have feelings, they make mistakes, they have conflicts, they are fragile, and they live in a chaotic world—but at the end of the day there is always order and unconditional love from family.

To me, that’s pretty sweet stuff for a four-year-old (and us adults, too!).

So if you are looking for inspiration for your next book, or you just can’t fine tune your character’s voice or motivation, dust off your childhood memories and examine just who you were as a child. Listen to your childhood voice even if, over time, it’s become just a whisper.

It’s important to remember: if you write for young children, you must think like a young child. From this vantage point, you just might find the key to unlocking your most authentic, magical writing.

(Even though it was cathartic for me to write this book, I am still just as neurotic about bugs today as I was back then!)

She is the mother of five children and has been writing since her youngest son (now 15) was a baby.
She works as a classroom aide in a local elementary school where she teaches after-school knitting and writing classes.

When she is not working or writing, she enjoys hanging around with her brood of young adult and teen children (whom she relies on for all manner of tech support), watching “Downton Abbey” (always with a box of Kleenex nearby), and imagining that someday she will have time to cook like the Barefoot Contessa every night.

She lives in New Jersey with her husband, three of her five children, and Angie, her adorable cat who thinks she’s a dog (fetch, anyone?).