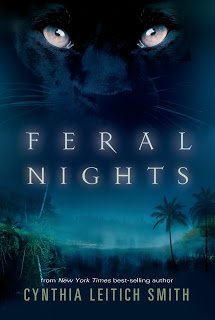 Warning: some spoilers for the Tantalize series.

When I decided to spin off the Tantalize series into the Feral series, it was reader questions that led the way.

Book one (Tantalize (Candlewick/Walker, 2007)) featured an X character named Ruby Kitahara, who presented herself as a wannabe vampire but later turned out to be a werecat in disguise.

The revelation of her species was something of a plot twist in a moment of high-tension, and one gunshot later, she disappeared into the night—never to be seen again.

I received countless letters from teens who wanted to know, “What ever happened to Ruby Kitahara?” When I published my fortuneteller-werecat story “Cat Calls” – first in an anthology called Sideshow: Ten Original Tales of Freaks, Illusionisrts and Other Matters Odd and Magical, edited by Deborah Noyes, and then as a stand-alone, free e-release – the question became more frequent.

Likewise, when passing references to a werebear rug and mounted shifter heads were included in Book two of the Tantalize series, Eternal (Candlewick/Walker, 2009), teens wanted to know how they had been obtained. Was there a black market for shifter heads and hides? Were these poor souls the victims of some malevolent sacrifice?

I was intrigued by these questions. If you build a world, a rich and fascinating one, people will want to know more about it. They’ll want to walk the sidewalks and plant their own gardens and play.

I’m an author who greatly values the conversation of books and has a keen sense of the kind of YA readers that tend to gravitate toward my work.

They tend to be smart – to the degree that it limits my audience a bit – but given my affection for literary devises and illusions, they’re also best suited to catch the various layers suggested in my work.

In addition to being both male and female, they’re diverse in the broadest sense of the word—not only in terms of ethnicity, national origin and orientation, but also region, socio-economic class, and faith. They’re independent, tend toward big dreams, and have a sense of humor. They enjoy a romantic subplot, but they’re looking for more than that–a bigger-picture theme and fresh central question. They like to think.

I would be foolish not to listen to them.

So, I considered those frequent questions that arose and decided to launch myself in the Feral series, the plot kernel of which was: “Whatever happened to Ruby Kitahara?”

It’s time her brother Yoshi and his new friends, Clyde and Aimee, found out.

Cynthia Leitich Smith & Feral Nights: an interview from Joy Preble. More thoughts on the new novel and its main characters, balance (or lack thereof) and the writing life, best Austin dining and other destinations, and much more.

Eternal: Zachary’s Story, illustrated by Ming Doyle (a graphic novel) and the paperback edition of Diabolical (Book 4 in the Tantalize series) also are now available.