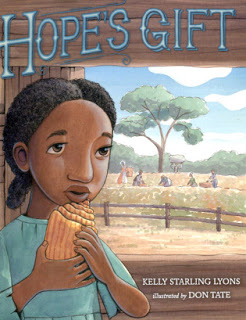 Congratulations to Kelly Starling Lyons and Don Tate on the release of Hope’s Gift (Putnam, 2012). From the promotional copy:

A poignant story celebrating the 150th anniversary of the Emancipation Proclamation.

It’s 1862 and the Civil War has turned out to be a long, deadly conflict. Hope’s father can’t stand the waiting a minute longer and decides to join the Union army to fight for freedom. He slips away one tearful night, leaving Hope, who knows she may never see her father again, with only a conch shell for comfort. Its sound, Papa says, echoes the promised song of freedom. It’s a long wait for freedom and on the nights when the cannons roar, Papa seems farther away than ever. But then Lincoln finally does it: on January 1, 1863, he issues the Emancipation Proclamation, freeing the slaves, and a joyful Hope finally spies the outline of a familiar man standing on the horizon.

Affectingly written and gorgeously illustrated, Hope’s Gift captures a significant moment in American history with deep emotion and a lot of charm. 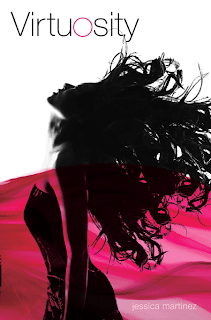 Faking a Thicker Skin by Jessica Martinez from Adventures in YA and Children’s Publishing. Peek: “It’s one thing to say we shouldn’t take criticism personally, but writing is personal. And if it’s not, it’s probably not very good.”

Taking Action by Kristi Holl from Writer’s First Aid. Peek: “An action plan is exactly what it sounds like–a written plan to take concrete action steps to perform a behavior that leads to accomplishing your end goal. An action plan involves when you will do something, where you will do it, and how you will do it.”

What It Takes to be a Writer by Robinson Wells from Adventures in YA & Children’s Publishing. Peek: “I can truly say that whenever I have followed that advice, things have gone well. And when I have not followed that advice–when I’ve spent too long fiddling around with worldbuilding, or taking some time off to ‘relax’, or getting caught up in the business side of writing–my productivity and personal happiness has always suffered.”

Mary Kole Editorial Services: consulting and editorial services for writers from the agent-author. 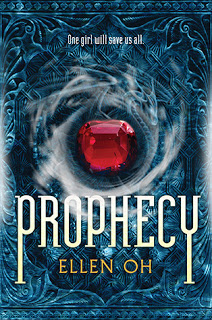 Interview with Ellen Oh from Cari’s Book Blog. Peek: “Like the Nine Dragon Waterfall, which is an actual waterfall in North Korea and the legend of the eight heavenly maidens who were said to descend to earth and bathe in the jade green pools. The chance to incorporate these myths and legends were the best part about writing this book.”

Now Go Write: Write Blind from AshelyPerez.com. Peek: “Set a timer for 10 minutes and write without stopping, not worrying about punctuation or even making sense. Repeat words if you get stuck; there’s no wrong way to do this.”

Maintaining Long-Term Success by Kristi Holl from Writer’s First Aid. Peek: “Setbacks are simply lapses in our upward spiral, or small break in our new successful routine, a momentary interruption on the way to our writing goal.” See also Organizing: Targets Versus Goals.

PEN/Phyllis Naylor Working Writer Fellowship ($5000) from PEN America. Peek: “The PEN/Phyllis Naylor Working Writer Fellowship of $5,000 is offered annually to an author of children’s or young-adult fiction. The Fellowship has been developed to help writers whose work is of high literary caliber but who have not yet attracted a broad readership. The Fellowship is designed to assist a writer at a crucial moment in his or her career to complete a book-length work-in-progress.”

Why Literary Lookalikes Are Important for Kids by Aimee Eubanks Davis from The Huffington Post. Peek: “It doesn’t take away from teacher quality policy work when a publisher
fosters the career of the next Alma Flor Ada. It doesn’t cost a school
district money when an author tells the story of Graciela instead of
Grace.”

Romancing the Writing from Sara Zarr. Peek: “…time does its work and what was new is familiar, and perhaps contempt is
bred in the unswept corners, the unmaintained habits of appreciating
the lover, the friendship, the career, the salvation.” Note: required reading.

The winner of Buffy: The Making of a Slayer by Nancy Holder (47 North) is Abby in Rhode Island.

The winner of The Poppy Lady: Moina Belle Michael and Her Tribute to Veterans by Barbara Elizabeth Walsh, illustrated by Layne Johnson (Calkins Creek, 2012) is Alison in Massachusetts.

Check out the Keep Calm and Query On giveaway at Teaching Authors.

Happy 2013! Here’s a peek into my personal celebrations: 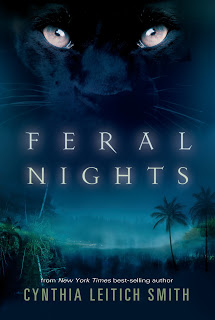 Publishers Weekly says of Feral Nights (Candlewick, 2013): “Smith’s fantasy smoothly switches between the three protagonists’ perspectives, while expertly blending the mythical and the modern. The story’s sharp banter and edgy plot make for an entertaining and clever story about loyalty and reconciling differences.”

In the short term, Cynsations will be posting on a reduced and sporadic schedule. I’m on a tight submission deadline for book two in the Feral series, and that is taking priority. (Also, I played a lot over the holidays.)

Thanks for your patience, understanding and support!