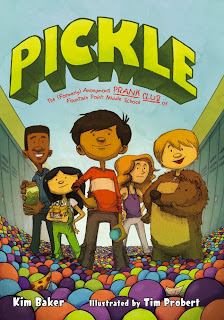 This is the story of The League of Picklemakers

Ben: who began it all by sneaking in one night and filling homeroom with ball-pit balls.


Frank: who figured out that an official club, say a pickle-making club, could receive funding from the PTA.


Oliver: Who once convinced half of the class that his real parents had found him and he was going to live in a submarine.


Bean: Who wasn’t exactly invited, but her parents own a costume shop, which comes in handy if you want to dress up like a giant squirrel and try to scare people at the zoo.

Together, they are an unstoppable prank-pulling force, and Fountain Point Middle School will never be the same.

I don’t think anything influenced the formation of Pickle more than thinking about what the younger me would want from a story.

I was a voracious reader as a kid. I always have been, but during the “middle grade” years I read everything I could— from classics like The Secret Garden by Frances Hodgson Burnett (Frederick A. Stokes, 1911) and Charlotte’s Web by E.B. White (Harper, 1952) to tons of series and mass-market stuff, with everything in-between.

My parents were really great about providing books and letting me have pretty free reign with a library card.

My elementary school librarian, Mrs. Schuster, recognized me as a book lover and gave me a “job” helping out in the school library after school while my mom was working. She would give me tasks around the library like tidying up and shelving, and we’d talk about books. Having that kind of “after hours” access to the stacks and a children’s book expert really helped me find my tastes as a reader.

There were some rough patches in that phase of my life, and I tended to steer toward books with fun and irreverence. I developed an early appreciation for humor. I was a semi-inadvertent troublemaker and so are the characters in Pickle. I wanted to make a story about goodhearted troublemakers, more mischievous than mean-spirited. The secret prank club starts out as a creative way to have fun, but when a rogue prank threatens their new alliance they use their unorthodox skills to push back.

Hopefully, it’s subtle, but there’s an underlying theme of standing up for individuality. As a young reader, anytime the kids in the story became empowered somehow, it was a plus. And if they beat an unfair system? It blew my mind.

I think I would have really been drawn to a book like Pickle as a young reader. And apart from the humor and shenanigans, I would’ve been really excited about a Mexican-American protagonist.

There was, and is, a huge void of books with Latino characters. Last year, Mitali Perkins pointed out that Latinos make up over 16% of the U.S. Population, but less than 2% of kid/YA books are written by Latinos or about Latino characters. That’s crazy!

I’m a mash-up of a Mexican-American Californian mom and an Anglo-Texan dad. I grew up in Wyoming and we’d spend summers in urban Los Angeles with my mom’s side of the family.

As a young reader, I could find books on practically anything in the library, except one that reflected aspects of my cultural identity.
I tried to create something that my kid self would’ve been really excited to find on the library shelf: diverse characters in a story filled with silliness, friends, covert operations, creativity, and protest. That fits younger me down to the core. It pretty much sums me up presently as well.

It was tricky, because I wanted the characters to use technology in their exploits, but I was worried about dating the story. I didn’t include any gadgetry beyond basic computers for two reasons. Electronics are the best example of how quickly technology can change. Just look at the shift from push-button style cell phones to smart phones over the last couple of years. If I’d mentioned the old style of texting that was more common while I was writing Pickle, it would be out of date by now. And secondly, my characters are middle schoolers from mostly working class families. They probably wouldn’t be that wired into the newest tools.

But, I wanted my characters to use the Internet to their advantage and create a hole in the wall where the story ends and the real world starts. The group creates a website for their pickle-making club, Pickles Forever. But like the club itself, it’s a front. If you click on the fizzy pickle soup recipe and then the word “simmer” there will be a new page with a password prompt. Enter “cheese” and it opens up another website with information and pranks for the P.T.A. (Prank and Trick Association) “maintained” by the characters. Kids can log their own pranks or comment on others. There’s a map feature to mark a new chapter and a decoder wheel for encrypted messages.

We tried to think of fun things kids could do while staying within the COPPA regulations (not collecting any identifying information on minors). The good thing about the website is that it can be adapted as times change. My husband is a programmer, so that definitely helps.

One of the characters has a website, Cat vs. Dude, that she works on during the story.

Kids like going out of the book to see evidence of the characters online. Technology is changing all the time, but websites are going to be around longer than other aspects.

It’s just another way of breaking down the fourth wall and looking at adapting our storytelling with new outlets. I think there’s a lot of potential for multi-media storytelling by working technology into the story in an organic way that expands beyond the page. 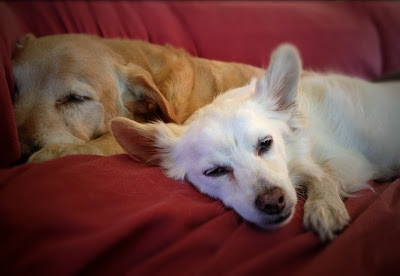 Great Examples of Humor in Kid Lit & YA: a bibliography compiled by Kim Baker. Organized by format and age-market category.