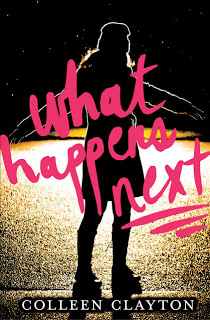 Colleen Clayton is the first-time author of What Happens Next (Poppy/Little, Brown, 2012). From the promotional copy:

How can you talk about something you can’t remember?

Before the ski trip, sixteen-year-old Cassidy “Sid” Murphy was a cheerleader, a straight-A student, and a member of a solid trio of best friends. When she ends up on a ski lift next to handsome local college boy, Dax Windsor, she’s thrilled; but Dax takes everything from Sid – including a lock of her perfect red curls – and she can’t remember any of it.

Back home and alienated by her friends, Sid drops her college prep classes and takes up residence in the A/V room with only Corey “The Living Stoner” Livingston for company. But as she gets to know Corey (slacker, baker, total dreamboat), Sid finds someone who truly makes her happy. Now, if she can just shake the nightmares and those few extra pounds, everything will be perfect… or so she thinks

Humorous and thoughtful, Colleen Clayton’s stunning debut is a moving exploration of one girl’s triumph over tragedy.

I was born with cataracts so I wore extremely thick bifocals as a kid and pre-teen. Needless to say, I struggled socially.

As many bullied kids are wont to do, I turned to books for escape. It’s just so much easier to immerse yourself in another world than face the one you’re stuck in. A book can’t wound you in the way that real live people can wound you. and, if a book does hurt you, most of the time, it’s because you have invited it to do so.

As readers, we rejoice in injury because that sort of pain shapes us
and reveals our humanity. The first book that ever wounded me, that made
me cry hysterically, was The Adventures of Huckleberry Finn by Mark Twain (1885). I was in about fifth or sixth grade and I’ll never forget it.

When
Huck says (about Jim): “He would always call me honey and pet me and do
everything he could for me,” I just burst into tears. I remember
shoving the book in my mother’s face while she was doing dishes, and
sobbing, saying “read this page!” I wanted her to feel what I was
feeling.

But even though it made me cry, that book, and
other books that I tended to really enjoy as a young reader, all had a
deep sense of irony and wit about them and were rich with clever
wordplay. 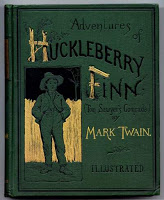 I like to think that my debut contains these qualities as well, an ability to wound readers and reveal their humanity while, at the same time, eliciting sidelong smiles from them.

Eh, boy. First of all, I’m really hoping that, ten or twenty years from now, my book has new readers.

Secondly, I’m hoping that these new readers will overlook my references to “ye ole Facebook” as well as what will likely be very antiquated cell phones. I hope that they overlook the security alarms, blog sites, TV show and home shopping references in the way that readers of my generation overlooked Judy Blume’s elaborate sanitary napkin belts and 12-step pregnancy test kits.

Of course you want to stay as current as possible while you’re drafting a contemporary story, but there comes a point, especially after a manuscript has been been bought and published, when a writer just has to say: “It is what it is” and let it go.

When I first started my manuscript, cellphones were not simultaneously capable of storing and playing music. I had to change that over the years-long drafting process.

Even during the copy edit phase last fall, I was changing things about the cellphones to keep up with new developments. Also, between the “last chance pass pages” and the point of debut, Facebook has changed its format, so one of my witty little techno-references is officially outdated and the book just hit the shelves.

Like I said, there comes a point when you just have to say: “It is what it is” and hope that your story is not terribly bogged down with pop-culture or technological references as to hinder the narrative over the long-haul.

At the end of the day, it’s about the story, characters, and the quality of writing. A good book will hold up over time and in the face of an advancing world. 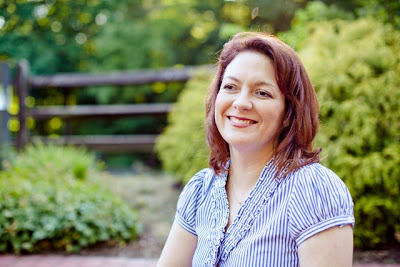