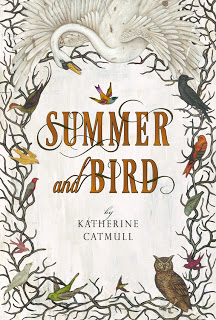 Katherine Catmull is the first-time author of Summer and Bird (Dutton, 2012).

When their parents vanish overnight, pragmatic Summer and her stormy, light-boned sister Bird follow a meager clue–well, it might be a clue–into the forest.

There the sad, electric song of a patchwork bird draws them Down, where they must fight—against a ravenous, bird-swallowing Puppeteer; against each other; and against their own fears, ambitions, and griefs—first to find the truth about their parents, and then to help the birds find their way back to the Green Home, the birds’ true home, lost to them since the bird queen vanished years ago.


But at the border of the Green Home, earth and sky crash together like jaws, demanding a sacrifice.

The narrative voice, in particular, was just dreadful in the earliest version of the first pages—it had a weird, cloying quality that probably came from certain turn of the century children’s books I loved as a child. An excellent voice for, say, The Five Little Peppers And How They Grew, but ghastly for me.

But even though every time I’d go back to my first pages, my eyes would pop out and my hair would stand up a’ la any given horror-struck cartoon character, what astonishes me in retrospect is that I didn’t give up. Not giving up turns out to be rather crucial to the process.

My agent, David Dunton, helped me a lot in making the manuscript more child-friendly (which I had given surprisingly little thought to—I was writing a children’s book that I would like), as well as tighter and generally spiffier.

Then my editor, Julie Strauss-Gabel, taught me what major structural revisions look like — I really had no idea how to do that, or even how to think that way. She’s a brilliant editor, and I feel very lucky to work with her.

Among the many things I’ve learned that I try to bear in mind now, as I write my second book: the bits I love rereading are usually working. The bits I avoid rereading: not so much. Also, it helps to figure out what your characters most desire, and how those desires are in conflict.

I was a great fantasy reader as a child—the Alice books were huge favorites of mine, At the Back of the North Wind, all the Edward Eager books, and of course A Wrinkle in Time.

I read some of the Narnia books, too, and the Lord of the Rings. But I’ve never been as drawn to high fantasy like Tolkien’s; and something about Aslan made me nervous. I was always sure he’d find me disappointing.

I also read a lot of Ray Bradbury as a child. When he died recently, I reread a few of his pieces for the first time since I was maybe 12 or13, and realized that he had a big influence on me, even just those distinct rhythms of his prose. It’s funny how what you read in childhood can go straight into your DNA.

As an adult, I have not read as much straight-up fantasy, but for a while I was obsessed with magic realists like Gabriel Garcia Marquez. When I first read One Hundred Years of Solitude in my teens, I felt a tremendous shock—you can do that? You can just have whatever you want to happen, happen, and in an adult book? Things can roll along quite normally except for ghosts, and a teenage girl who floats up to heaven, and a thousand yellow butterflies that mark a lover’s death? I felt a similar rush when I first read Jorge Luis Borges and Italo Calvino.

If there are contemporary books that inspire me, it would probably be the His Dark Materials trilogy by Phillip Pullman (Ballantine, 1995-2000), a children’s series that brilliantly and fearlessly delves into profound, complex subjects. I love those books. 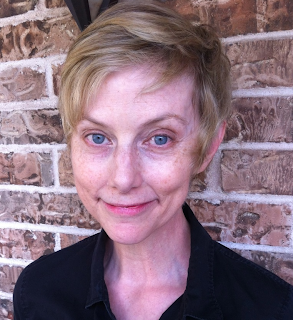 Also, I was actually inspired to begin Summer and Bird when I read Coraline by Neil Gaiman (HarperCollins, 2002). That book scared me down to the bone—though I’ve since read Gaiman saying it seems to be scarier for adults than for children.

As I set Coraline down—I still remember where I was sitting—I thought: This is a children’s book for adults. I did not know that was a thing, but it is a thing I want to do. I’d been casting around for a major writing project, and I decided that would be it.

By the way, I have no idea what I meant by “a children’s book for adults”—I mean, Summer and Bird is definitely a children’s book (as is Coraline, for that matter). But it’s what I had in mind as I wrote. Perhaps I just meant that I was writing for myself, writing the children’s book I wanted to read—which is what all writers do, or ought to, I think.

3 Replies to “New Voice: Katherine Catmull on Summer and Bird”