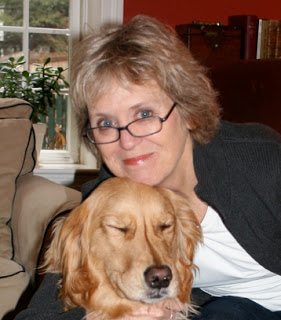 Barbara O’Connor grew up in Greenville, South Carolina. After graduating from the University of South Carolina with a degree in English, she headed to Southern California. An interest in writing for children led her to take classes at UCLA to learn the basics.

Since publication of her first children’s biography in 1993, Barbara has gone on to publish fifteen more books, including middle grade novels.

Barbara is a popular visiting author at schools and a frequent speaker at conferences around the country.

I’ve been writing for publication for 22 years. Those years have showed me two areas of success for a children’s writer: critical success (e.g., awards, recognitions by organizations, peer recognition, etc.) and child-pleasing success (i.e, children love your work).

For some authors, these are intertwined. But often, authors find themselves enjoying one and not necessarily the other. We’ve all heard discussions about Newbery winners that children don’t like and vice versa, the beloved and popular books that children clamor for that are not recognized by awards and such.

I’d be lying if I said that writing books that children love is enough for me. I am honored to have received quite a few awards and recognitions from well-respected children’s book organizations (e.g., Parents Choice, ALA, etc.).

But since I’m in schools a lot, I will say that there is nothing more satisfying than seeing children reading and enjoying my books. And when the mail carrier brings me a letter from a gushing fan, well, that feels like success.

With each book, I’m reminded that less is more. I try to say a lot with as few words as possible. That’s my style. I work hard on showing and not telling and that’s improved over time. I’ve learned, also, to listen to my writing voice and to follow my instincts when I hear it getting off track. That’s a skill that is vital but, I think, comes with experience.

To reach new levels, I see that my later work has become more upbeat and humorous than earlier works. I enjoy writing humor and try to keep my storylines lighter than they used to be.

What still flummoxes me at times?

Plot, plot, plot. I hate plot. I love character and setting. But, alas, a book needs a plot. So I plow through.

My plots are usually quite simple, but they work.

The best way to build an audience is to keep writing. I’ve been fortunate to have published one book that is particularly popular (How to Steal a Dog (FSG, 2007)), which has kept children on the lookout for more. Also, I maintain a specific style and voice that readers have come to expect and look for (e.g., small Southern town settings).

The internet has been my marketing salvation. I’m an introvert. Book tours and travel for marketing and even some conferences are sometimes outside my comfort zone. So being able to sit home in my jammies and market my book has been a godsend.

My blog was the first internet marketing I did, and it really helped me get the word out about book news. Students and teachers use it as preparation or followup to visits. I’m able to link to items on my website, post news and pictures about conferences I attend, etc.

I’ve also been trying to be more active on Twitter (@barbaraoconnor). That’s a great venue to get news out quickly to a lot of people. 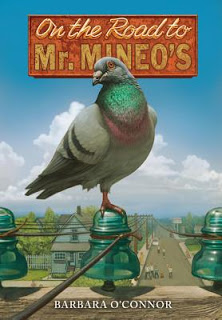 Enter to win one of two signed copies of Barbara’s latest release, On the Road to Mr. Mineo’s (FSG, 2012). From the promotional copy:

Summer days drift by slowly in Meadville, South Carolina–that is, until Sherman the one-legged pigeon flies into town and causes a ruckus.

First Stella, who’s been begging for a dog, spots him on top of a garage roof and decides she wants him for a pet. Then there’s Ethel and Amos, an old couple who sees the pigeon in their barn keeping company with a little brown dog that barks all night. The pigeon lands smack in the middle of Mutt Raynard’s head, but he’s the town liar, so no one believes him. And when Stella’s brother Levi and his scabby-kneed, germ-infested friends notice the pigeon, they join the chase, too.

Meanwhile, across town, Mr. Mineo has one less homing pigeon than he used to…