Everyone loves an origin story, right? I certainly do, although I agree with my former roommate Marty Beckerman that Hollywood goes nuts telling the same ones over and over.

This is the origin story of a book, and as such it will involve a little-known tome, a lonely teen, and bitter disappointment. Here goes…

When I was 11, I got really into a pair of books. One was A Collection of Essays by George Orwell:

The other was the Al-Qadim: Arabian Adventures by Jeff Grubb: 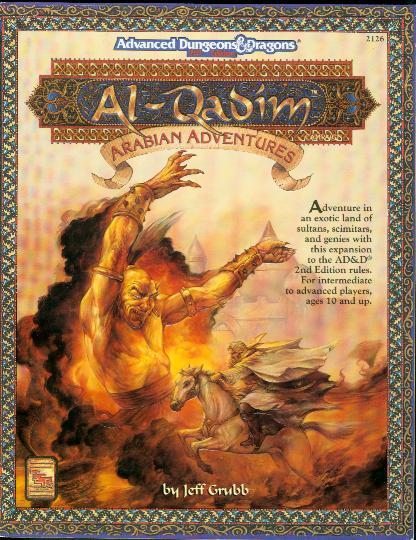 Of these two writers, one is better known than the other — although I’m not sure if it’s for the right reasons. People know Orwell because Animal Farm and 1984 made him “the wintry conscience of a generation”, but his essay “Such, Such Were the Joys”, which opens A Collection of the Essays, is the centerpiece of his more personal work.

“Such, Such Were the Joys” is the original teen angst screed. Way before Weezer, Orwell opens up about his treatment at an English boarding school (“Crossgates,” a renamed Eton) and demolishes his fellow students, his teachers, and himself.

Through his honesty about his bed-wetting and poverty, he puts everyone in their place. For Orwell, who himself said that one of the #1 reasons to write is “to get your own back on the grown-ups who snubbed you in childhood”, it must have been physically cathartic.

Al-Qadim, on the other hand, is a Dungeons & Dragons rulebook.

A lot of other writers (three, chiefly: Chabon, Eggers, Lethem) have written about how high and low culture should be measured by the same yardstick — especially in the realm of comic books — and I’m not going to rehash their arguments. (Besides, when it comes to the high/low culture debate, Chuck Klosterman has the last word, calling good taste “a subjunctive device used to create gaps in the intellectual class structure”.) Of course Jeff Grubb’s Al-Qadim is worthy of the same critical attention as Orwell’s “Such, Such Were the Joys.” It’s writing.

And for me, Orwell and Grubb offered equally alluring fantasies.

Orwell was the fantasy of the put-upon kid turned writer. Al-Qadim was the fantasy of fantasy. It had charts and maps and great-looking creatures and rules and classes and races. You could lose yourself in there. And as I charged into adolescence, I needed to lose myself in something. Because here are the things I wasn’t good at in high school:

I wrote about this stuff in my first book Teen Angst? Naaah... — but one thing I never wrote about (until now) was that at the end of a confusing day at school, I could always open the Al-Qadim book and immerse myself in the charts of genies and scimitars and wizards. There was something seductive about that tabular data.

It also fascinated me in video games like “Dragon Warrior” and “Final Fantasy“. “Final Fantasy” was a particular bête noire of mine because I beat it and then went into school and told everyone I beat it — and then realized that it had just been a dream and I hadn’t beaten it at all!

I didn’t beat it until 15 years later: This tendency, to smother the trials of teenager-hood under a blanket of data, persists. When a 15-year-old plays “World of Warcraft”, that’s what he/she is doing.

When a 15-year-old excels at the swim team, that’s what he/she is doing — drowning out the world with the simple data-driven imperatives of breathe, move your arms, breathe.

Data is what we use to make the world go away.

I always wanted to write about this — about a guy who wasn’t able to interact with the real world because he was too trapped in his data, and about how he finally managed to grow out of that. I wanted to make him a late bloomer, which I was, physically, and I wanted him to be unexpectedly ready for the world once it challenged him (because that’s how I wanted to be — and, maybe, how I was?). I wanted him to get revenge on the bullies and find a girlfriend and swing a sword — or a warhammer, because I thought those were cool. I wanted to marry “Such, Such Were the Joys” and Al-Qadim in an unholy ceremony presided over by jewel-like dice.

The result is The Other Normals (Balzer + Bray/HarperCollins, 2012): I hope you dig it!