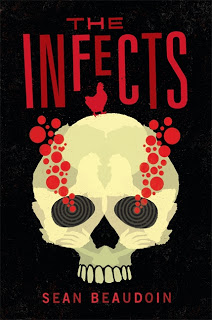 Yeah, don’t bother searching for me in the index, since no one bothered to actually give me a name on the page.

Which is total discrimination. Mostly because I’m a zombie. That’s right, a slavering, shambling, flesh-gorging revenant.

I spend a majority of the book sort of drooling in the background, following the main characters around and watching them soak up all the glory.

No one ever wants to know what’s going on with ol’ Norm. No one wants to ask me how I feel, or if I’m hungry, or if I’m cold. Man, it would be nice, even once, if someone said, “Hey Norm, you want a blanket?” or “Hey, Norm, it looks like your jaw is sort of falling off its hinges. Want me to re-adjust that for you?”

No, of course not. That would be too much to ask. 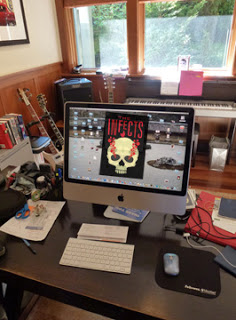 But I don’t want to just sit on my rotting butt and complain.

Listen, fine, it’s a reasonably amusing book, and half the reason I kept shuffling along was because I wanted to see what happened at the end. I guess it was cool to be invited at all, you know? But I’m just stuck with the feeling it could have been so much cooler.

Like, why didn’t I get to fire the shotgun? Why didn’t I get to have a love scene? I’m totally capable of loving! Go ahead and hand me a puppy. No, I’m serious. Or a kitten. I’ll totally show you how loving I can…oh, never mind.

The truth is, I guess I deserved what I got. I was working my usual shift over at Danny’s Record Hut when this cute little Goth girl came in. She was sort of groaning and her eyes were unfocused and deep down I knew what she was, but I was sort of hoping she was following me around the aisles because she thought I looked really great in my new hoodie. You know, like maybe she wanted to get a milkshake and talk for a while and then we’d go to a Black Keys show together?

But no. She didn’t want any of those things. She just opened that cute little Goth mouth and took a chunk out of ol’ Norm’s wrist.

And here’s how colossally dumb I am–even when she was standing there, blood dripping from her lips down onto her skinny jeans, I was thinking “No problem. So what if we got off to a bad start? There’s still got to be a way to work this whole thing out.”

Duh. Suddenly I got a really bad headache. Things turned all grey and there was a buzzing in my ears and I started to sweat.

I closed my eyes and next thing you know I’m frothing and moaning like the rest of them, chasing some chubby little sweat suit full of lunch across a playground.

How did I even get there? And why was my hair such a total mess? Well, I won’t bore you with how that all ended.

Bottom line, here’s the thing. This zombie deal? I’m not all that into it. The moaning. The menacing. The dragging my back foot around behind me with my arms out like I’m carrying wet towels. It’s all such a cliché. A caricature. I mean, who says zombies don’t ride Vespas? Or take taxis? Or get invited to fern parties with great appetizers and delicate wines and have smart, sophisticated conversations about poetry and Eastern European politics?

No one, that’s who. Except the moron who wrote The Infects.
You know what you should totally do to get him back for me? Instead of the six (6) copies of the book you were planning to buy, only get two. That’ll show him for not at least letting me attack some tourists at the mall!

Enter to win one of three copies of The Infects by Sean Beaudoin (Candlewick, 2012). Publisher sponsored. Eligibility: North America (U.S./Canada).

6 Replies to “Guest Post & Giveaway: Sean Beaudoin (or Rather Norm) on The Infects”