As a novelist and National Geographic author, I pay close attention to my own backyard beach here in the Pacific Northwest where river otters roll in our grass, Great Blue Herons and eagles nest in my kitchen tree, and mighty orcas and harbor porpoises sail by during our picnics.

One day while washing the dishes, I glanced out my Seattle waterfront window to see the tail flukes of a gray whale slapping the waves.

With this marine life a part of my daily world, it’s no wonder that many of my adult books — from the environmental thriller Animal Heart (Sierra Club, 2004) to the memoir Build Me an Ark: A Life with Animals (W.W. Norton, 2001, 2002)— are about the sea and the fellow creatures who share our shores.

When a seal pup hauls out on our backyard stretch of rocky beach, worlds collide. Human and animal meet, often for the first time. A newborn seal pup faces many dangers: dogs off leash, joggers, curious beachcombers, and in the summer, volleyball games and hundreds of sunbathers.

For many years, my neighbors would gather together and just sit protectively over any seal pup left on our beach while the mother swam far out into the Salish Sea to fish. But in 2007, there was a bumper crop of newborn seal pups on our busy, urban Alki Beach.

Here’s what humans look like to a seal pup onshore:

To be good neighbors and help protect seal pups, we formed the volunteer grassroots organization, Seal Sitters. We’ve been trained by NOAA (National Oceanic and Atmospheric Administration) to cordon off the seal pup with yellow tape, like a big crib on the beach. Then we carefully observe, educate passersby, and most of all, keep off-leash dogs away from the vulnerable pups.

Since 2007, over 500 volunteers, including kids, have taken our Seal Sitters’ training. Some kids watch over pups when doing their homework on the beach.

One summer, our Seal Sitters volunteers were watching over a very underweight seal pup, Leopard, as he rested in the rocks near Alki Beach. We were worried that Leopard, a golden, spotted seal, might not survive weaning. Seals spend half of their lives on shore resting, nursing, and regulating their body temperatures.

Day after day, an increasingly thin Leopard hauled out onto the beach, hiding in rocks from joggers, dogs off leash, and curious beachcombers. He was as beautiful as he was vulnerable.

The weaning season is especially dangerous for pups whose mothers have left them after four-to-six weeks to fish on their own. Even though we have a healthy harbor seal population in Washington State, only 50 percent of seal pups survive their first year.

It’s a tough life out there on the beach, but people and especially kids can make a difference. Like Miles, our Russian boy Seal Sitter whose passion for all things animal makes him a hero.

Here’s Miles on the beach:

Robin Lindsey, the photographer-illustrator of this picture book, and my co-founder of Seal Sitters, noticed that Leopard was getting thinner by the day. We worried that Leopard might not survive weaning. Then one morning, Robin found Leopard sleeping cozily with another pup, Silkie.

She was a little older, plumper, and her fur shone a luminous white in the misty marine light. Silkie slept sweetly with her head on Leopard. Silkie taught the smaller pup to fish for himself. The two pups were such great friends and so adorable, delighting our kid and adult Seal Sitters every day.

“This is a children’s book,” I told Robin as she snapped a zillion photographs of Leopard and Silkie.

Problem was, I’d never written for children, only adults.

Writing a picture book? The difficult dance and haiku of capturing a story in only a thousand words? It seemed way beyond me. After sixteen books, I was again a debut author.

But my writer friends argued that a children’s book about marine mammals was a next logical step for me. I’d studied whales and dolphins for two decades and chronicled their lives in such books as Living by Water and Nature and Other Mothers (Ballantine.)

In fact, my second memoir, I Want to Be Left Behind: Finding Rapture Here on Earth, begins and ends with Seal Sitting scenes. It was selected a “Top Ten Best Non-Fiction Book” of 2010 by The Christian Science Monitor. Here’s the first chapter, “Saving Seals,” published in Orion magazine.

The more Robin and I and other Seal Sitters watched over Leopard and Silkie, the more I realized that here was a true story of friendship and survival. Leopard and Silkie were going through what kids do — separation from the mother and finding friends to survive. This story needed telling!

With Robin’s gorgeous photos, I wrote a draft called “Pups on the Beach” and found a children’s book agent, Erin Murphy. She sold the picture book to revered editor Christy Ottaviano, who has her own imprint at Henry Holt for Young Readers.

Christy championed the book and guided us every step of the way. I kept trying to figure out the narrative arc of the story. Robin kept making her daily “sweeps” of the shore and documenting the lives of our Salish Sea pups. Robin’s fabulous “blubberblog” is on or Seal Sitters website. It is there she chronicles the dramatic lives of seals who grace our shores.

We lived the story along with Leopard and Silkie. As did all the kids who faithfully kept watch over these two pups. One of the kid Seal Sitters, Etienne, organized a beach cleanup to keep the seals safe from marine debris. Etienne was interviewed with me on the recent NPR “Living on Earth” program that aired nationally.

Our teenage seal sitters patrolled the summer beach boardwalk on their skateboards. Kids of all ages made Seal Sitting their school science projects and even community service. In the tradition of Jane Goodall, who always named her chimps and documented their stories, whenever a kid discovered a seal pup first, they were given the honor of naming the pup.

So over the years we’ve had fabulous seal pup names — Spud, after our local Spud’s Fish and Chips, “Feurte,” which means “strong” in Spanish because the pup was injured and survived a nasty wound while we protected him on the beach; and a very plump lady-of-leisure pup, whom Robin named, “Queen Latifah” because she lounged on beach rocks while an adoring public watched for 67 straight days.

Scholastic magazine ran two stories in 2009 on young Seal Sitters for their Super Science and Science in Action magazines, read in over 550,00 classrooms. We were getting seal reports and emails from kids in Scotland and Russia.

I always tell readers that this picture book is the most difficult book I’ve ever written. Many adult writers are under the misconception that children’s books must be easy — after all, how could so few words matching a lot of beautiful photos be so hard? But this book took us three years in the making.

The boy hero grew taller, naturally lost his front teeth, learned English, and is now in third grade. The pups were only with us for a few weeks one summer and so the photos of them are few. Sometimes the light was almost gray from marine mists. These pups are wild, not captive in a zoo whenever a photographer wants to snap a shot. What always had to change in the editing and production was the text. And that was my job.

In the edit stages, I placed about 100 photos on the floor of my guest room and walked around them for hours each day, rearranging them like dominoes and trying to fit the true story into a narrative arc. Whenever I was not hovering over the photos in bewilderment, I was going about my life with an imagined giant crossword puzzle of photos and words floating above my head.

I’m sure there are many more accomplished picture book authors who have figured out a sophisticated way to weave art with their words. But for me, this was what worked best.

My biggest surprise as a debut children’s book author is how much I enjoy it. Children’s and YA authors seem so much saner and more collegial than the adult book world. I joined SCBWI and attended the international conference last summer in Los Angeles and was struck by how cooperative and helpful everyone was. And such enthusiasm!

In fact, I’ve found so many acts of kindness and generosity in the picture book world. An ace bookseller is taking us and Leopard and Silkie into the Seattle schools; children’s librarians are inviting us to talk to school assemblies; other authors, conservation groups, zoos, and aquariums are asking us to present our slide show from the book all over the country.

And unlike so many of the adult books for which I’ve had to travel thousands of miles to research, this book began in my own backyard. Just by paying attention to my neighbors, who happen to be animals.

Pupping season begins in mid-June in the south Salish Sea. By then, it is already in full swing on the outer coasts. We always keep a lookout for a newborn with Leopard’s golden spots or Silkie’s pure white fur. The next generation.

The Leopard and Silkie site is excellent — both for those interested in learning more about Seal Sitters and this book and also, for you marketing mavens, as a model of a successful tie-in website for a children’s book.

Personal highlights of the summer include my teaching a workshop and speaking at Writing and Illustrating for Young Readers in Sandy, Utah (Salt Lake City area). 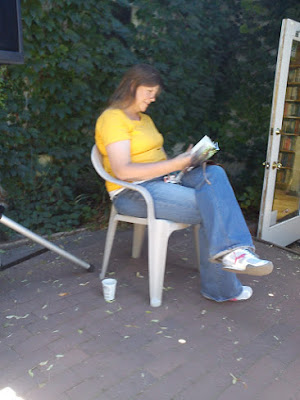 I participated as a faculty member in WIFYR at the bequest of my long-time friend, fellow author, and WIFYR chair Carol Lynch Williams, shown here at King’s English Bookshop. 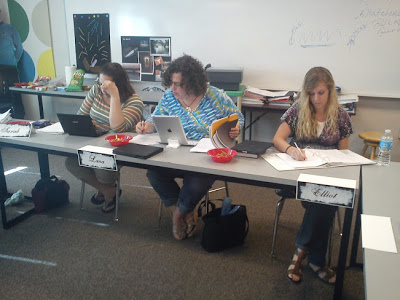 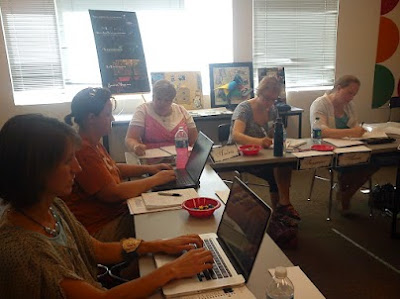 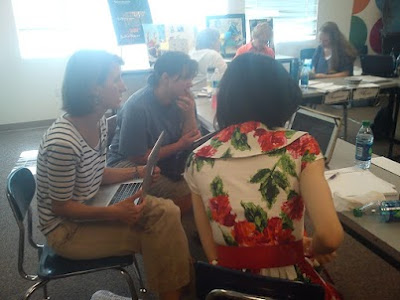 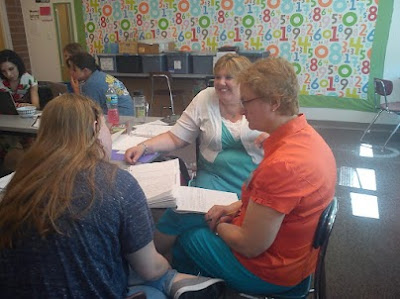 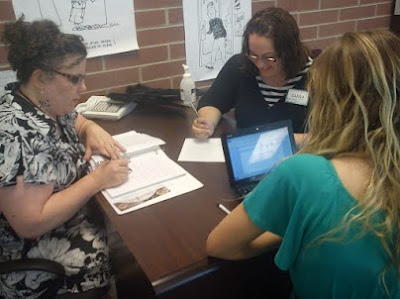 Thank you to my brilliant assistant, Courtney, as well as my other utterly splendid YA fantasy/paranormal
workshop students — Andria, Aurie, Camille, Elliott, Lana, Paige, Sarah
and Suzanne for making the experience such a success!

Alas, I didn’t manage to get (non-blurry) photos of the whole faculty, but here’s a peek at:

I hugely enjoyed visiting with each of them and all of them–authors, editors, and agent! The attendees were all upbeat and terrific company, too.
After the conference, Greg and I spent a couple of extra days in the Salt Lake City area.