I remember meeting my husband like it was yesterday.

I was an enthusiastic twenty-something on my first day at my new job in advertising for a San Francisco weekly newspaper. The building was filled with artsy, interesting people, and as I got the standard tour of my new offices, I saw a handsome black guy with teeny tiny dreadlocks standing at the end of a hallway talking to our production manager.

He had a wonderful smile with dimples that flashed as he spoke and an intriguing accent that was hard to place.

As we got closer, I saw that they were looking at something on his left hand – his new wedding ring. Yes, my future husband had gotten married a few days before. To someone else.

For the next few years, we were work friends – him settling into married life and me dating one guitar player after another. We both lived in the Haight Ashbury neighborhood, and I’d sometimes run into him and his wife at the market or at our local Cajun restaurant. We’d stop and talk for a few minutes before moving on, trading a little work gossip here and there.

Until I saw him out alone one night. I asked where his wife was and he told me that the marriage hadn’t worked out. I said I was sorry and my friends and I moved on, but I couldn’t help thinking about it.

Our offices were situated right on top of a popular local restaurant. Friday at 3 p.m. was the deadline for the next week’s publication. Promptly at 3:05 p.m. every Friday, the restaurant was packed with our entire staff, celebrating a job well done.

Late one Friday, we found ourselves alone in the restaurant, long after
everyone else had scattered for the night.

On impulse, we decided to
walk all the way across the city– talking about our goals, our past
mistakes and pointing out our favorite places as we walked through the
different neighborhoods.

Several hours later, we were standing in front
of my apartment and I knew that I really didn’t want to say goodbye.

I was worried about starting a relationship with him because he’d just ended a marriage, so I did what every girl does in that situation and called my mom.

I’ll never forget her advice – “If you don’t, someone else will.”

Luckily, I took that advice and we’ve been together for over eighteen years.

In all of those years, I can count on one hand the number of times anyone has been blatantly racist to us. I do have to admit we had a few relatives who weren’t totally supportive in the beginning (if I never hear ‘it’s not fair to the kids’ again, it’ll be too soon), but everyone came around eventually.

Maybe we’re careful or maybe we just don’t pay attention, but I think
we’re just like every other family.

I don’t think of my husband as the
handsome black man who’s great with computers, I think of him as the guy
who forgot to write soccer practice down on the calendar and still
can’t find his phone.

My boys aren’t beautiful biracial children (okay,
they are), but annoying teenagers who can’t remember how to pick up a
sock off the floor or put toilet paper on the roll.

I honestly didn’t think about it when I made the love interest in Transcendence (Walker, 2012) biracial – I just wrote the character that I thought my main character would be attracted to. It wasn’t until final edits that we realized that we hadn’t addressed ‘the race issue’ at all, and it was at that point I made a conscious decision not to.

While I think there is a definite need for books about race and prejudice and coming out, I think we also need books that have people of color or gay characters just because. The only way to normalize non-white or non-straight characters is to see them over and over in books, TV and movies, and it feels like we’re starting to see more of that every day.

I was thrilled when my publisher put Griffon on the cover and that my boys can now see someone who looks like them on a book. He’s there because he’s a gorgeous, smart, engaging character that girls fall in love with. Who also just happens to be brown.

International giveaway! Enter to win a signed copy of Transcendence by C.J. Omololu (Walker, 2012). From the promotional copy: 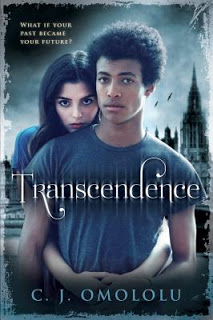 When a visit to the Tower of London triggers an overwhelmingly real vision of a beheading that occurred centuries before, Cole Ryan fears she is losing her mind.

A mysterious boy, Griffon Hall, comes to her aid, but the intensity of their immediate connection seems to open the floodgate of memories even wider.

As their feelings grow, Griffon reveals their common bond as members of the Akhet—an elite group of people who can remember past lives and use their collected wisdom for the good of the world. But not all Akhet are altruistic, and a rogue is after Cole to avenge their shared past.

Now in extreme danger, Cole must piece together clues from many lifetimes. What she finds could ruin her chance at a future with Griffon, but risking his love may be the only way to save them both.

Full of danger, romance, and intrigue, Transcendence breathes new life into a perpetually fascinating question: What would you do with another life to live?