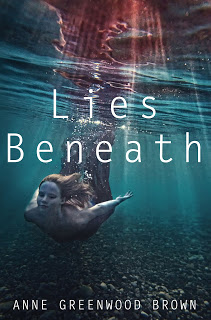 Anne Greenwood Brown is the first-time author of Lies Beneath (Random House, 2012). From the promotional copy:

Calder White lives in the cold, clear waters of Lake Superior, the only brother in a family of murderous mermaids. To survive, Calder and his sisters prey on humans, killing them to absorb their energy. But this summer the underwater clan targets Jason Hancock out of pure revenge.

They blame Hancock for their mother’s death and have been waiting a long time for him to return to his family’s homestead on the lake. Hancock has a fear of water, so to lure him in, Calder sets out to seduce Hancock’s daughter, Lily.

Easy enough—especially as Calder has lots of practice using his irresistible good looks and charm on ususpecting girls.

Only this time Calder screws everything up: he falls for Lily—just as Lily starts to suspect that there’s more to the monsters-in-the-lake legends than she ever imagined. And just as his sisters are losing patience with him.

I’ll take a stab at this and say there are two edgy topics in Lies Beneath.

First, nudity. Because my merpeople are morphing into human legs when they hit dry land, there are several instances where I had to deal with them being naked until they found or stole something to put on. I thought about having clothes morph in an out with their bodies, but it never felt right.

Ultimately, I decided that the merfolk are in many respects animals and animals don’t freak out about being unclothed, so why should they?

Second, the stalking and the murders. This is a big one that has caught some people by surprise (especially if they expected a retelling of Disney’s “The Little Mermaid” (1989)).

Most people understand that this is an Evolution Story (in a very Darwinian sense). Calder White starts out creepy and disturbing, which brings me back to my earlier comment that he and his sisters are animals, or at the very least animalistic. I opted to treat them like the lion on National Geographic taking down the gazelle. They’re predators, and they stalk their prey just like any other animal would.

Calder evolves over the course of the novel, losing his animal tendencies and working toward what I consider to be the most profound and difficult capabilities of the human spirit: forgiveness and the ability to be self-sacrificing.

Was it the “right decision?” Yes. Absolutely. That was the story I wanted to tell.

I wrote Lies Beneath in the first person because the central conflict–Calder White’s struggle between family loyalties and loving his enemy–played out better when I let the reader inside his mind, experiencing that struggle with him.

The sequel, Deep Betrayal (spring 2013), is a continuation of the Lies Beneath story, but told from Lily Hancock’s perspective. Even though I had established her voice through dialogue in Lies Beneath, it was hard to get into her head after being in Calder’s for so long. There were a lot of false starts. Then when I finished Deep Betrayal and returned to Lies Beneath for the editing rounds, it was a little unnerving to be back in Calder’s head. (He can be such a mess sometimes.)

I’m working on Book 3 right now and, because of my internal need for symmetry in all things, I’m playing with alternating povs between Calder and Lily. It’s mental gymnastics, that’s for sure.

What I’ve found is that I need to write Calder’s story line all at once, then write Lily’s. Later, I’ll shuffle their chapters together, because going back and forth is making me feel a bit psychotic.

Twilight by Stephenie Meyer (Little Brown, 2005) was my “gateway” paranormal novel, and it led me to other paranormal YA series like Shiver by Maggie Stiefvater (Scholastic Press, 2009); Nightshade by Andrea Cremer (Philomel, 2010); and The Dark Divine by Bree Despain (Egmont, 2010). But, honestly, I had no intention of writing a paranormal novel.

People ask if I’ve always been a big mermaid fan. The truth is, I hadn’t really given them much thought before.

What happened was that I was writing an adult contemporary novel set on Lake Superior, and I kept waking up with my main character diving off the ferry boat into the lake.

If you know anything about Lake Superior, you know that that would be an incredibly stupid thing to do. Death wish stupid. I kept telling him, “No, no, no, you can’t do that,” but he kept diving.

He dove, and he burst out with this fantastic fish tail.

I was like, “Why didn’t you tell me sooner?”

I scrapped what I’d been writing, and wrote Lies Beneath instead. I didn’t have any preconceived notions about mermaids, so I felt free to be inventive.

Imagine my surprise when the latest Pirates of the Carribbean movies (“On Stranger Tides” (2011)) came out. Now they’re saying mermaids are the next vampire? I had absolutely no idea I was stepping into a trend. I just couldn’t get that ferry captain character to stop diving into the lake!

I went to my first writers conference in April 2010, and I signed up to do two agent pitch sessions. I pitched that adult Lake Superior novel I mentioned above to the first agent. She hated it.

Before I went to my next pitch session, they announced that the agent I planned to meet with was ill and had sent a colleague in her place. I almost decided not to do the pitch because Google told me the replacement agent only represented nonfiction.

Still, I figured it would be good practice, and maybe it would pay off just to make a contact in the publishing industry. So, I kept my appointment with Jacqueline Flynn of Joelle Delbourgo Associates.

Jacquie and I connected on a personal level first (our sons play hockey). When it came time to pitch my novel, I didn’t pitch the adult novel, but rather a middle grade project I’d been working on. She asked that I send it to her, which I did, expecting no response. She represented nonfiction after all!

Four months went by, and one of her boys pulled my middle grade manuscript out of her bag, read it, and told her she should sign me. She read it and agreed.

That novel didn’t sell, but by the time we realized it wasn’t going anywhere, Lies Beneath was ready to go and sold in a two-book deal in less than a week.

My advice, be professional. If you’re invited to send something, send it. And don’t quit writing! Always have something new in the hopper.