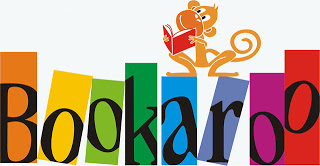 Last time I reported about networking and I mentioned Singapore and India. Here is what happened at Bookaroo in New Delhi last year:

My First Picture of India

I love India. If I had to use two words to describe my first impressions, they would be sensory explosion.

I arrived at New Delhi airport and was driven to my hotel, and all the while my brain was working in overdrive and I was thinking, “What is going on?”

It was midnight for goodness sake and the roads were jam packed, and they drive so close to each other and they don’t use the marked lanes. Street lights I don’t remember, but there were so many car lights they weren’t needed. And the sounds! Honk! Honk! (plus a few toot toots from the wildly decorated tut-tuts!)

It was like many other literary festivals I have spoken at. There was an outdoor bookshop, a green room, and enthusiastic audiences. But the children and parents that I was speaking to in India were wildly enthusiastic. They wanted to touch. They wanted to question.

I presented a story reading session for my (then) new picture book Sounds Spooky under the overarching branches of a gorgeous tree (botanical name unknown) next to a solid stand of bamboo that provided a wonderful backdrop and sound barrier for my spooky storytelling session. 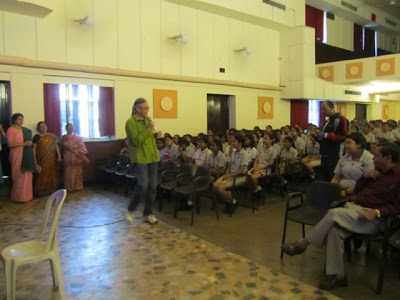 In an amphitheatre seating a few hundred, I presented a community story-creating session (one I used as a classroom teacher), gathering children from the audience, bringing them to the front of the stage and together creating an oral story. It was mid morning there (early for Indian time) so I started with about 20 people, but within minutes the amphitheatre was full and children were hollering to join our expanding story. After an hour, it was standing room only, and there were 20 children standing on stage (and hundreds more in the audience) who could recite the lines from the story we had created.

Next to a clay covered building I presented talks about my favourite subject – me and the life of a children’s author; about writing historical fiction texts; and about writing picture books. It was mostly outdoors under the warm and inviting Indian sun.

And like many festivals there were the author signings and the bookstore was alive with children, trying to locate the books. And the signing queues seemed to snake on forever.

Like most festivals, I was asked to sign pieces of paper (okay), and books that I didn’t write (I declined), as well as the autograph book…but these autograph books were something special. They had the signatures of Indian cricketers too!

I have made it. I am up there on the same plane as international cricketers! (At one hotel, the lobby was vacated while I was signing the visitors book – there were a few Bollywood stars in that book).

My school visits in India were some of the most wonderful and inspiring that I have ever been to. The schools were not elite wealthy schools but simpler schools with a passion for inspiring their students and empowering them to have a better future, schools where parents have sacrificed enormously. They were unlike any other school I have visited, and even writing this now, I pop out with goosebumps and I tingle.

These students were like super sponges. Not only had they researched as much as they could about me, some students created posters, others wrote biographies, and still others read my website so thoroughly that they could tell me about all of the animals that were with me while I was teaching at the zoo.

And the questions they asked. They were not intrusive or ones that could have been answered from reading my website. They were inquisitive and showed a real passion for finding out all there is to know about me and writing and being a ‘famous’ children’s author (in reality the fame doesn’t go past my street corner), with the most frequently asked question:“Mr. Cheng,” (so courteous and polite), “you write lots about Chinese people, so will you write about us?” 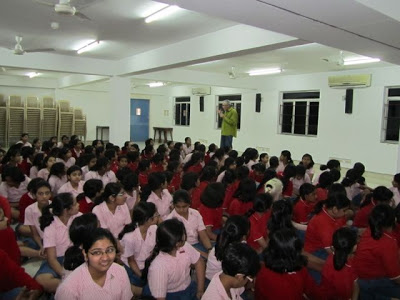 These children want their stories told to a wider audience, too. At every school visited, I was treated like a rock star. At each school entrance was a welcome sign – just for me – crafted by students, often with my picture downloaded from the internet. Morning and afternoon teas were in the Principal’s Office. I was presented with gifts that had been crafted by the students from their hand craft classes, a small glazed kiln-fired clay vase that now holds my pencils, a plaque that is now attached to our outdoor wall, a small bamboo lined mirror now on our sitting room wall, a note book for me to use crafted from recycled paper (the students were so thrilled to see that I write first drafts in note books) and much more. And in these offices, Mr. Cheng was asked if he would consider staying to teach at their school – they were serious.

I spoke in universities to students who were just as passionate and just as sponge-like as the school students but in conditions that (mostly) were very unlike our universities.

In one talk, not only was room filled inside (about ten seats wide and thirty rows deep), but there were students outside blocking the breezeway.

The raised wooden podium wobbled and I had a handheld microphone (with a rather short chord) and the single speaker was tied to the window frame. The lights were sparse and there were no projection facilities. But these students too, they continued to ask, to question, wanting more.

India is a fascinating and a passionate country, and the students are passionate, too. They love hearing us speak, reading our books and they want more!

So if opportunity comes your way, grab it with both arms and go!

With more than 35 titles in traditional and digital formats, including picture books, non-fiction, historical fiction, a musical libretto and an animation storyline, Christopher Cheng is well experienced in Australian children’s literature.

He conducts workshops and residences for children and adults and holds an M.A. in Children’s Literature. He is a board member for the Asian Festival of Children’s Content and on the International Advisory Board and co-regional advisor (Australia and New Zealand) for the SCBWI.

Christopher will be covering the children’s-YA book scene in Australia, New Zealand and across Asia for Cynsations. Read an interview with Christopher. Read more about Christopher’s time in India at his blog.

2 Replies to “Report from Bookaroo in India”