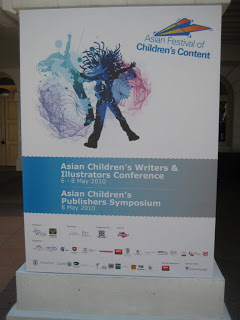 This is a note about networking and contacts.

I have always loved exploring new countries and recently my life as a full time children’s author (my first title was published in 1990) has dramatically increased these opportunities.

In late 2011, I had the privilege of speaking at Bookaroo – a children’s literature festival in New Delhi, India. I love traveling the world, but India was not a country on my radar.

How did I get offered a speaking gig at Bookaroo?

It all came about because, in 2010, I was presenting at another international children’s festival in Singapore – the Asian Festival of Children’s Content. After I had finished my first day of speaking in Singapore, the Bookaroo organisers asked me to present at their upcoming festival.

As I had already accepted another festival for the same time, my fourth for the year, I had to decline but that was immediately followed with “Would you speak next year?” and so in November 2011, I landed in India.

It’s a long way to travel from Australia to New Delhi for a three-day festival so thankfully my trip was extended when the Australian Government sponsored my visit under the visiting artists programme, taking me on a tour through more Indian cities visiting school and universities.

Why all this preamble? Because it’s all about networking and getting involved and advertising you!

We authors and illustrators can lead very sheltered lives, barely encountering another human – except maybe our children and spouses – in our daily activities as we produce our works, but we shouldn’t. We need to belong and we need to get out there. In the past 12 months, I have spoken at festivals in India, Singapore, Hong Kong, USA, the Philippines. How come?

Since becoming a full-time children’s author I have learned that for me this job is not only about writing for kids – which is the best job in the world and what I love to do – but it’s also about networking and developing contacts.

As part of my networking, I write articles for journals and blogs and newspapers, and mentor, consult, and promote. I have been a judge and an assessor on writing awards and established international children’s book awards.

I was, for a number of years, a National Ambassador for Literacy Week (a federal government programme), and this year I am one of 18 National Ambassadors for our National Year of Reading. For me it’s all part of the ‘job’ of being a children’s author.

It’s never too early to start developing a list of contacts. I have been published for more than 20 years, and over that time I have gathered a list of industry professionals, bloggers, writers, editors, journal publishers, newspaper columnists and more.

Which leads me to why I was presenting in Singapore.

Most of my recent appearances came about because I received an email early in 2010 asking me to advertise a new festival in Singapore. The organisers knew that I had a solid network of contacts in the Australian children’s literature scene and of course my SCBWI membership. They had also investigated my website and found out what I can do and so a request for promotion assistance ended up becoming a speaking invitation as well.

Five months after the inquiry about broadcasting the festival news, I was presenting in Singapore, and sitting in the audience were the organisers of other Asian literary festivals – and not just children’s festivals either.

Enlightened festival organisers engage speakers with a children’s literature focus as well as adult literature. My presentation was also an advertisement – for me – and it lead to appearing elsewhere around the region.

There are festivals exploding all over the Asia Pacific region with a children’s literature component. Many people don’t realise that there is a huge English speaking population that is located not in the Americas or Europe but here in the Asia Pacific region. Children are learning English at school, and they are hungry for English books to read, and they love to hear us speak.

So from that one email enquiry early in 2010, I was able to spread the word about a new festival, encourage other creators to attend, and have myself be contracted to speak at a number of other international literary festivals.

And remember too that speaking contracts are also really important.

So get your lists started. Read journals and blogs and e-zines. And then start sharing, and you never know where that might find you.

He
conducts workshops and residences for children and adults and holds an
M.A. in Children’s Literature. He is a board member for the Asian Festival of Children’s Content and on the International Advisory Board and co-regional advisor (Australia and New Zealand) for the SCBWI.

Christopher will be covering the children’s-YA book scene in Australia, New Zealand and across Asia for Cynsations. Read an interview with Christopher. Find out about his appearances and more at Christopher Cheng’s Blog.

2 Replies to “Author Speaking Opportunities in the Asia Pacific Region”