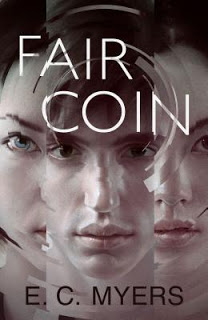 E.C. Myers
is the first-time author of Fair Coin (Pyr, 2012). From the promotional copy:

Sixteen-year-old Ephraim Scott is horrified when he comes home from school and finds his mother unconscious at the kitchen table, clutching a bottle of pills. The reason for her suicide attempt is even more disturbing: she thought she’d identified Ephraim’s body at the hospital that day.

Among his dead double’s belongings, Ephraim finds a strange coin—a coin that grants wishes when he flips it. With a flick of his thumb, he can turn his alcoholic mother into a model parent and catch the eye of the girl he’s liked since second grade.

But the coin doesn’t always change things for the better. And a bad flip can destroy other people’s lives as easily as it rebuilds his own.

The coin could give Ephraim everything he’s ever wanted—if he learns to control its power before his luck runs out.

When I was a kid, I pretty much read everything I could get my hands on, whether it was meant for boys, girls, or adults. (I probably shouldn’t have been reading those Ed McBain 87th Precinct police procedurals about drug pushers and prostitutes at the age of 13, but the books were only 10 cents!)

I was fortunate in that my mother didn’t really pay attention to what I
was reading, or she trusted me enough to handle anything I came across.

I think I was the only boy I knew who had read Are You There, God? It’s Me, Margaret, but I would recommend it to anyone.

As an adult reader, I still read broadly, but I tend to stick to the genre stuff and YA. As a writer, I don’t want to set up boundaries either, so I’m comfortable crossing genres and throwing bits of everything I like into the mix.

I had been writing and submitting short fiction for five years or so without much success, and I was ready to throw in the towel and focus on my professional career, when I was accepted to the Clarion West Writers Workshop. It was an amazing, intense six-week critique workshop, in which I learned from science fiction greats like Octavia E. Butler and Connie Willis.

It absolutely changed my life. I learned more in those six weeks than I had in the previous five years; my craft vastly improved by the end of the workshop, and shortly afterward, I started selling stories. It was the first real sign that I might have a chance at success, which gave me the push I needed to prioritize writing in my life.

What works best for me is getting up a little earlier and writing in a coffee shop for an hour or so before work every day. That’s my protected time, so no matter what else happens with my job or personal life, I’ve already gotten some words down.

I also try to write on my lunch breaks and in the evenings, and especially in longer stints on the weekend–basically whenever I can. You have to make the time, whether that means skimping on sleep or watching less TV.

But you also have to make time for your family and friends, and be forgiving of yourself when life inevitably gets in the way of the work. Just try to keep writing high on your list of priorities and make progress, no matter how small, as often as you can.

I’m trying to do anything and everything I can to let people know I have a novel and hopefully convince them to take a chance on it–hopefully without being too annoying. 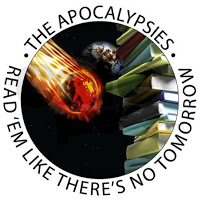 By far the best thing I did was joining the Apocalypsies, a group of other authors debuting in 2012. I really recommend joining or starting a community like that to share advice, ideas, and help promote each others’ work.

I also followed a lot of recommendations I found online: checklists to prepare for your book launch, that kind of thing, and decided what I did and didn’t want to do, and what I couldn’t do because of financial or other constraints.

I created a Facebook page for my book, an Amazon author page, a tumblr, and a book trailer, and I’m still designing some promotional swag. Goodreads has been a great asset in reaching out to readers, especially with giveaways. Just be open to every possibility.

I’m really lucky to have a great marketing team at Pyr to collaborate with. I was warned that the onus is on the author to do a lot of marketing, but I’m discovering that the more you do on your own, the more they can do for you.

Some other advice: Start promoting early, as early as you can manage. In fact, start before you even have anything to promote. I already had a website and blog in place and had been using Twitter (@ecmyers) and Facebook for a while, so it wasn’t like I appeared out of nowhere and started trying to connect with the online community to sell my work. A lot of opportunities have come my way because of relationships I’d already made at conventions and in social media.

I enjoy some aspects of promotion, especially meeting new people and discovering lots of other great books and authors–but it’s definitely work. It’s hard not to resent it some days because the time I spend promoting this book is time away from writing the next one or time away from my family, and my free time is already so limited.

It’s rewarding too: My book publication feels like more of an event than it would otherwise, and it’s gratifying to see people share in that and help the book succeed.

I did it the old fashioned way: I researched agents who represented young adult genre fiction and compiled a list. Publishers Marketplace and AgentQuery.com were indispensable in that process, and I read as many interviews with agents as I could find online.

I built a spreadsheet to keep track of my queries, and after fine-tuning my query letter and synopsis for about a month, I started sending them out.

I sent them in batches of three or four a week, or whenever I received responses, and I worked through my list until Eddie Schneider at JABberwocky offered representation.

I didn’t accept right away because I had a few other agents looking at the full manuscript, but I had a good feeling about him after we talked about my book and future writing career.

It was really an easy decision; JABberwocky is one of the best in the business for science fiction and fantasy, and Eddie was not only enthusiastic about Fair Coin, but he really understood it and had terrific suggestions for making it as good as possible.

When you’re looking for the right agent for you, you should keep in mind what’s important to you as a writer, and think beyond your first novel. You’re hoping for a long relationship with him or her, and there’s a lot more to consider than just a track record of sales.