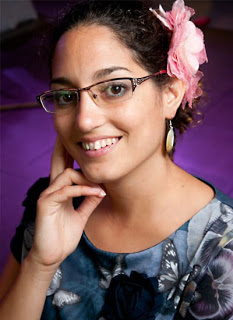 On your facebook page, you have a very intriguing illustration of a man cutting the hair of a girl wearing a crown. The girl looks both stunned and thrilled. What’s happening in this picture?

This picture is actually my favorite illustration from the last book I finished illustrating. The story tells about a princess who couldn’t see and the king tries to find a cure in almost every way: a doctor, witchdoctors from around the world, witches and magicians, but not one of them succeeded. Through the whole story the royal tailor tries to clue the king into the solution—her hair is just too long to let her see! After the king was so desperate from trying, he gave the tailor permission to solve the problem.

The author, Cigal Shaul, had an interesting idea of making the illustrations ambiguous, so when you ignore the text you get a different aspect of the story.

The idea was not to show the face of the princess so the reader wouldn’t know the solution is that simple. This illustration describes the moment when he finally cut her hair after years of stumbling and getting stuck at walls! Thrilled is correct for describing her feelings.

By the way, the character of the tailor is based on my boyfriend David. It was a brilliant idea that made me love making the illustration even more.

You have re-illustrated two books by Levin Kipnis, a well-known author in Israel. Was this intimidating? What did you do to enable yourself to re-imagine the books?

It wasn’t intimidating at all. It was very exciting! I had the honor to work in front of Levin Kipnis’ son and his wife. To be honest, I didn’t grow up on these two books, I was busy drawing all day rather than reading, but Ziona showed me all the versions ever made for these two books.

The fact that I didn’t grow up on these books helped me to think purely about the text and not to get stuck with the old illustrations in my head.

The work on the first book, Daffodil the King of the Swamp, began after I came back from my first visit to the Bologna book fair in 2009. I was so inspired by the great variety of colors and characters I saw, my first the thought about frogs (the main characters) painted in green suddenly sounded weird, so I picked blue, pink and yellow instead. Ziona preferred to stay loyal to nature. Nevertheless, it still became a wonderful book with a lot of color and imagination!

Nature played the main role in the second book, The Three Butterflies. The plot takes us to the north of Israel were there are fields of flowers—lupines, poppies, irises, etc.

The fact that Ziona has studied nature and is so connected to nature didn’t make it easy on me! Every little detail was given careful attention, the leaves and the wings of the butterflies, the proportions between the flowers had to be correct. Now I can only thank her for schooling me. She really got the best out of me at that time. These days I’m working on another text of Levin Kipnis, which is a version of the familiar story about the lion and the mouse.

Of the twenty books you have illustrated, which is your favorite and why?

My favorite book is definitely Roni and the Zodiac Wheel. This is a wonderful and original book written by the astrologer Anat Pinto, who is passionate about exposing children to astrology in a special way. Luckily, she was advised by a mutual friend to choose me as an illustrator. It was a great opportunity for me to use a new technique I was developing at that time and was so eager to use!

Dealing with the text wasn’t simple at all. It was nothing like an ordinary text that leads you through a simple plot. Each spread was explaining one of the 12 zodiac signs in lovely way.

Working with Anat was a deep and meaningful journey. That time Anat’s book was the only project in my schedule, which made me very productive. Almost every day I created a spread, so every day Anat received a phone call or an email with an illustration, a sketch or consulting about the next zodiac sign.

At the beginning of February, an exceptional quantity of copies were requested by stores. We were very happy for our new “baby.” Now anyone can find it standing proudly on the bookshelves!

In looking at your illustrations, I am struck by your strong use of color and the way you often seem to include multiple characters with different emotional points of view. What are your goals as an illustrator?

Since I was little I was attracted by strong color. I dressed very oddly, painted my room in orange, green and yellow and excluded black and gray completely from my vocabulary.

I believe in happy illustrations, in a contrast to what’s happening now in the world of illustration. The phenomenon of depressing and dark illustrations is becoming wider, and it quite concerns me, I must say. When I illustrate I see from the children’s point of view, I want the children to enjoy the world I create and to dream about it when they fall asleep.

Expressing emotions is something I’m good at. Since I was a child I used to draw cartoon-y characters in different situations. The illustration becomes alive when you make the characters look emotional and helps the children to empathize with them.

The text of children’s books is pretty short and correct, so you should avoid using too many descriptions because every word is calculated. I’m here to fill the holes in the text. Most of all, I like to get into details.

Lately, I have been working on the famous tale about the lion and the mouse in the Israeli version. Every time I had a close up of the lion I drew each and every line in his mane. It’s inexplicable. I just don’t like minimalism.

You write on your SCBWI member profile that you enjoy learning new techniques. What techniques are you exploring now? How do you think you might use them?

The last year was all about finding my style and trying to develop a unique technique of my own. Since I can remember I have been working digitally. Twelve years ago, the books we self-published were drawn with a Wacom, when it was very rare. First, I used a simple drawing program, but then I upgraded myself to the Corel Painter 11.

Thanks to being in Bologna three times, I came to some very important conclusions about what I should do next. I understood that I’m too digital, that in my illustrations there was no personal touch. The days after the fair weren’t easy at all, but it made me change myself from the inside.

I began to explore new techniques, things no one usually does. I took a sculpting tool and engraved with it on a thick paper, later I colored over it with pencils. It wasn’t such an invention, but it wasn’t something I saw in children’s books. I felt like it wasn’t enough for me, so I continued trying.

I took artist’s canvas and flipped to the raw side of it. I drew with soft pastels. It becomes a little blurry but the colors can be mixed in a very special way. I sprayed fixative so it wouldn’t powder my whole studio and scanned it.

On the computer, I continued working with Painter and drew over it in a new layer. This option gives me a lot of freedom. The drawing on the canvas can even be abstract but in the computer I can define whatever I want and let my imagination go wild! I’m so glad I have discovered this technique. It’s something I have never seen, even not after three times at the book fair.

Since July 3, I have illustrated books this way. I’m sure there will be many more but none of them will look the same. I also know that this technique will take me far.

You can see my projects online.

Inbal Sarid is the illustrator of 20 books for children. She was born in 1986 in Tel-Aviv, Israel and raised in a home that encouraged art—pencils, markers and papers were everywhere—with her brother and sisters.

Her first illustrated book was created as a gift for her sister to illustrate a story she wrote.

At the end of 2005, Inbal volunteered to serve in the rescue unit of the home front command and therefore had a two-year break from illustrating.

She resumed her career as a freelance illustrator in 2008. Through book after book and year after year of attending the Bologna Book Fair, she has developed herself, her style and her personality as an illustrator and now has illustrated 20 books for children. In addition to being a freelance illustrator, Inbal works as an art director at iMagine machine, an applications company.