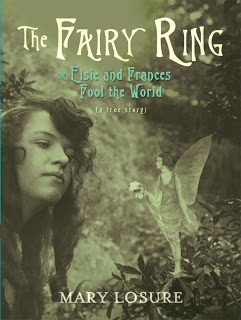 Mary Losure is the first-time author of The Fairy Ring, or Elsie and Frances Fool the World (Candlewick, 2012)(excerpt). From the promotional copy:

Frances was nine when she first saw the fairies. They were tiny men, dressed all in green. Nobody but Frances saw them, so her cousin Elsie painted paper fairies and took photographs of them “dancing” around Frances to make the grown-ups stop teasing.

The girls promised each other they would never, ever tell that the photos weren’t real.

But how were Frances and Elsie supposed to know that their photographs would fall into the hands of Sir Arthur Conan Doyle? And who would have dreamed that the man who created the famous detective Sherlock Holmes believed ardently in fairies – and wanted very much to see one?

Mary Losure presents this enthralling true story as a fanciful narrative featuring the original Cottingley fairy photos and previously unpublished drawings and images from the family’s archives. A delight for everyone with a fondness for fairies, and for anyone who has ever started something that spun out of control.

The enchanting true story of a girl who saw fairies, and another with a gift for art, who concocted a story to stay out of trouble and ended up fooling the world.

How did you approach the research process for your story? What research sources did you turn to? What roadblocks did you run into? How did you overcome them? What was your greatest coup, and how did it inform your manuscript? 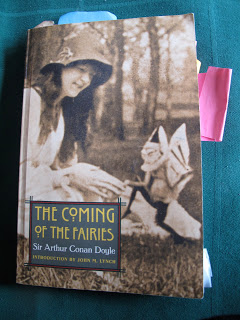 In a former life I was a reporter, so I knew I wanted eyewitness accounts.

I’d seen The Coming of the Fairies by Sir Arthur Conan Doyle (Bison Books reprint 2006). I looked at Elsie’s smile, her hand extended in greeting to the little gnome, and I knew right then that I wanted to do the story.

The Coming of the Fairies turned out to be a fascinating, detailed description of the investigation that Doyle and another man, Edward Gardner, conducted into the mysterious Cottingley Fairy Photographs. It’s full of these great, oddball details that I could never have made up.

Both Doyle and Gardner believed that Elsie and Frances were simple little village girls, wide-eyed and innocent. I knew they weren’t any such thing.

But who were they, really?

To me, that was the mystery, not the photographs. I knew I wanted to build my book around two real-life kids and what it was like for them as the story unfolded.

From an archive in England, I obtained copies of letters the girls wrote to Edward Gardner, but they were just polite thank-you notes, not revealing much. The real breakthrough was when I found Frances’s autobiography, which had just then been published by her daughter Christine. Frances’s memories of her first encounters at the age of nine with what she believed were fairies were beautifully told, in what seemed to me to be an authentic child’s voice.

And when I went to England and compared Frances’s account with Gardner’s letters in the English archive, I noticed that the sequence of events in Frances’s autobiography and in the letters meshed in almost every detail. So that was Frances.

Elsie was much more of mystery. I think that was the greatest roadblock. Elsie had kept the secret of how she faked the photographs from her husband, her son, and her grandchildren for most of her long life. She had thwarted hoards of reporters who tried to pry it from her. And she hadn’t written much–she was a terrible speller and always hated school.

But when I visited her son Glenn in England, I saw Elsie’s paintings on the walls of his house. In the family photo albums, I saw black-and-white photographs she’d colored by hand. Those images, more than anything she’d written or said, were the window into her character I needed.

The Cottingley Fairy Photographs were her artistic vision. I think that’s why they still have the power they do. 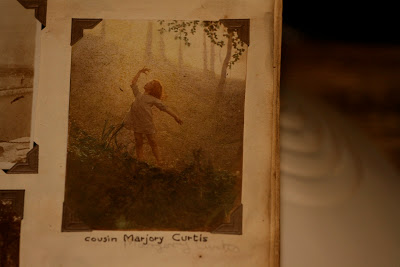 There were also a couple of mini-coups. One was finding a facsimile of the manual for the box camera Elsie used to take the first photograph. It showed clearly how primitive and complicated the camera was. Elsie, who had never taken a photo before in her life, would have had to study the manual very carefully to take the perfect, clear photo that she did. 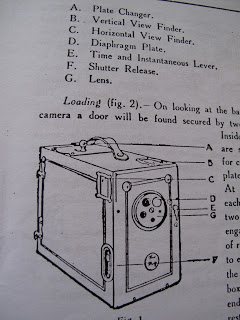 Another great moment was when Glenn showed me his mother’s copy of The Lost World by Sir Arthur Conan Doyle (1912). Sir Arthur sent it to Elsie as a present, hoping he could win her over and she’d reveal more about the fairies. Inside, I found this very odd illustration. I wondered, what did Elsie think when she saw this? (photo of the Lost World title page signed “yours sincerely, Arthur Conan Doyle ) 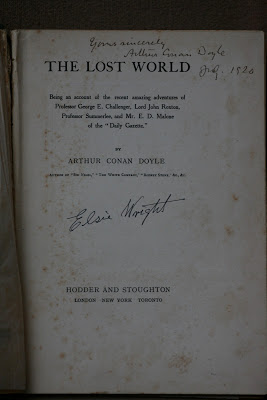 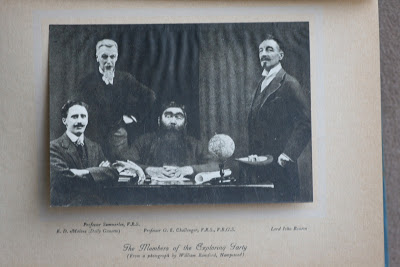 I could go on and on about my research, but I’ll spare you! A lot of what I found I didn’t use because it was about grownups, or about Elsie and Frances as grownups, or turned out to be just fun facts that didn’t lead anywhere.

I think that’s part of the secret of nonfiction—leaving out things that may have been great to discover, but in the end don’t advance the story you set out to tell.

I found my editor after my incredible agent, George Nicholson, submitted another children’s book I’d written to Candlewick. Like The Fairy Ring, that book is narrative non-fiction. Its hero is a wild boy found in the forests of France in 1797.

I was excited about Candlewick because I liked what they were doing in exploring the borders of fiction and non-fiction. I admired the “ology” series, books like Dragonology: The Complete Book of Dragons by Dr. Earnest Drake (Candlewick 2003) and Egyptology: Search for the Tomb of Osiris by Emily Sands (Candlewick 2004). 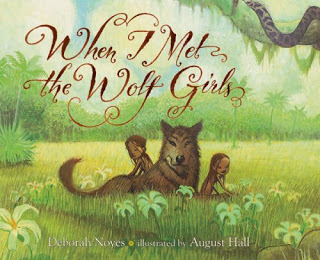 And (by an incredible stroke of luck for me) it so happened that one of the editors at Candlewick, Deborah Noyes Wayshak, was already interested in the subject of wild children. She’d written a picture book based on the true story of two wild girls discovered in India in the 1920’s, When I Met the Wolf Girls by Deborah Noyes (Houghton Mifflin Children’s Books, 2007).

She bought my wild boy book, which will be out in 2013 from Candlewick.

(It’s called Wild Boy: The Real Life of the Savage of Aveyron. And to my amazement, the illustrator they’ve chosen is Timothy Basil Ering, who did the illustrations for the Newbery- Award-winning The Tale of Despereaux by Kate DiCamillo (Candlewick, 2003). I am still in awe about this.)

Just a few weeks after George had submitted the wild boy manuscript to Candlewick, he submitted The Fairy Ring, too, and Deb took that as well.

And it was about that time that I learned about Captivity by Deborah Noyes (Unbridled Books 2010). It’s a novel based on the true story of the Fox sisters, two girl spiritualist/hoaxers.

I must admit it was kind of eerie – as writers, we’d been exploring many, many of the same paths.

So I felt as though it wasn’t research at all, but two happy coincidences that steered me toward my editor.

Deb understood from the beginning what I was trying to do, and my hope that it might be something a little different in children’s nonfiction. She gave me sure and steady guidance and supported me right down the line on issues like the Fairy Ring’s sometimes quirky voice and the massive amount of source documentation at the end.

We included the source notes to make sure people knew it was a true story, even if it is called The Fairy Ring. That’s also why the marketing department at Candlewick put “A True Story” on the cover below the title.

But still, I’ve been seeing mention of it here and there on the web as fiction or historical fiction. One website put quotation marks around the word “true.” It’s frustrating, but understandable, I guess.

And there is such a thing as a true story about fairies.

Clap if you believe!

2 Replies to “New Voice: Mary Losure on The Fairy Ring or Elsie and Frances Fool the World”