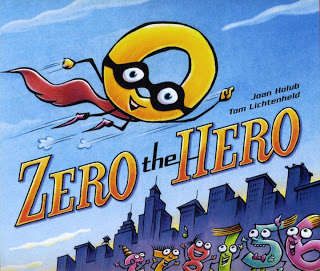 Zip. Zilch. Nada. That’s what all the other numbers consider Zero in my new picture book that’s about, well, nothing.

Zero doesn’t add anything in addition. He’s of no use in division. And don’t even ask what he does in multiplication. (Hint: Poof!)

Still, he knows he’s worth a lot, and when trouble comes, Zero swoops down just in time to prove that his talents are innumerable.

This book grew from a conversation with a teacher, who mentioned that she uses the Zero the Hero concept to teach place-holding to her students. In her classroom, Zero is a hero because he enables us to count beyond the number nine. Without him, we’d be like the ancient Romans, unable to do much in the way of math. 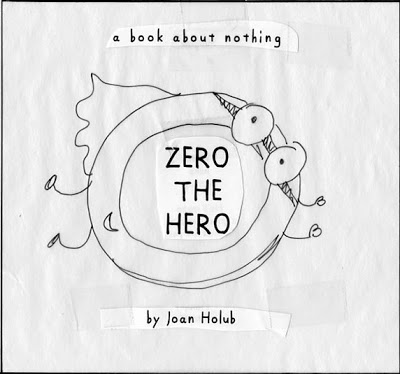 I immediately visualized Zero as an underdog math superhero, complete with cape. But it took me about five years to actually finish writing a book about him. Lucky thing, because the manuscript hit my editor’s desk just as she was working with a wonderful New York Times-bestselling artist named Tom Lichtenheld, who agreed to illustrate it.

In this kind of “faction” (a blend of fiction and fact), the fiction component is always paramount. It’s the story. Young readers won’t necessarily pick up this picture book to learn math facts. They’ll likely want the story to entertain them, make them root for the characters, and wonder how it will all turn out.

Sure, Zero the Hero subtly teaches place-holding and arithmetic operations like addition and subtraction. It touches on stuff like rounding up and down, and even/odd numbers (and the fact that the number eight resembles a snowman). But all of that is secondary. I just hope kids find it to be a fast-paced, funny story. And who doesn’t love a superhero?

I submitted this picture book to Henry Holt/Macmillan as a dummy, complete with very rough black-line sketches, even though I didn’t intend to illustrate it. When writing easy readers, chapter books, and tween or middle grade, I submit a traditional, typed manuscript instead.

But when it comes to picture books, I think visually. So I create dummies. Sometimes they’re just words taped on pages that I can turn so as to get a feeling of how the story unfolds. Those never go to an editor. Other times—as in the case of Zero the Hero—I draw sketches, generally spiff things up, and actually submit the dummy itself.

Why? If you were an editor, and a book like Zero the Hero came your way asking to be published, which of these examples would you find easier to envision at first glance–my dummy page or my typewritten text? 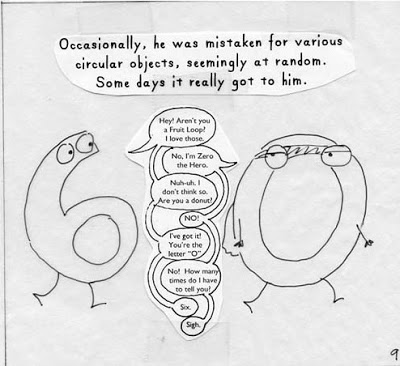 Not every picture book requires that an author make a dummy. However, if you have a cast of ten numbers or more, all with something to say, and sometimes saying it in speech balloons—a dummy could be a good vehicle for communicating your vision to an editor. And you don’t have to be a professional artist to make one that gets your ideas across. 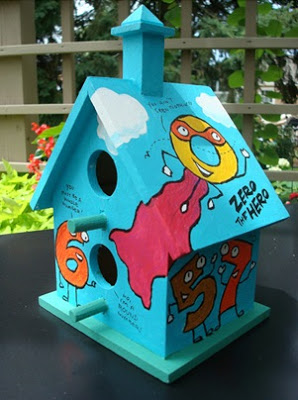 Speaking of creative ways to get your ideas across, look how Tom Lichtenheld used this birdhouse to display his earliest character sketches. Although Zero’s ‘look’ evolved quite a bit from this initial point, I was really wowed when I got this in the mail from Tom. It was my introduction to his humor and generous spirit, and I knew right away that the process of creating this book was going to be something special with him involved.

After the book was finished, our collaboration continued. Tom and I also wrote the script for an animated book trailer short about Zero the Hero that’s lots of number fun. We hope everyone will take a look. After all, you’ve got nothing to lose!

9 Replies to “Guest Post: Joan Holub on To Dummy or Not to Dummy a Picture Book & Zero the Hero”