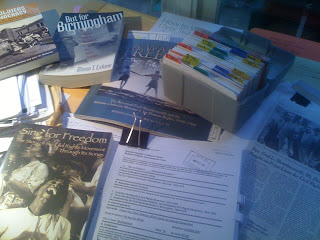 Cynthia Y. Levinson is the first-time author of We’ve Got a Job: The 1963 Birmingham Children’s March (Peachtree, 2012)(excerpt)(blog). From the promotional copy:

The inspiring story of one of the greatest moments in civil rights history as seen through the eyes of four young people who were at the center of the action.

The 1963 Birmingham Children’s March was a turning point in American history. In the streets of Birmingham, Alabama, the fight for civil rights lay in the hands of children like Audrey Hendricks, Wash Booker, James Stewart, and Arnetta Streeter.

Through the eyes of these four protesters and others who participated, We’ve Got a Job tells the little-known story of the 4,000 black elementary, middle, and high school students who voluntarily went to jail between May 2 and May 11, 1963. The children succeeded – where adults had failed – in desegregating one of the most racially violent cities in America.

By combining in-depth, one-on-one interviews and extensive research, author Cynthia Levinson recreates the events of the Birmingham Children’s March from a new and very personal perspective.

Was there one writing workshop or conference that led to an “ah-ha!” moment in your craft? What and how did it help you?

Absolutely. A Whole Novel Workshop sponsored by the Highlights Foundation completely turned my writing around, though not in the ways I had anticipated.

These intensive, week-long sessions are by-application, by-invitation only. When the novel I’d been working on for four years was accepted, and I was assigned to work closely with Carolyn Coman, I was thrilled.

At our first one-on-one session, Carolyn talked with me about structure, point of view, voice—basic issues that I knew I needed help on but didn’t know how to improve.

Help seemed on the way! During the second evening’s group discussion, however, the other mentor-teacher so thoroughly criticized my draft, I thudded to a standstill. He was right. The novel was beyond help. At that moment, I switched to writing nonfiction.

For the rest of the week, I continued to meet with Carolyn. And we continued to talk about structure (especially, story-boarding, in which she’s an expert), point of view, and voice—all of the elements of fiction that play a role in good nonfiction writing. During private writing time, I pondered and explored the topics about which I wanted to write true stories.

At a previous Highlights-sponsored event, Chatauqua, I had talked with Lou Waryncia, editorial director of Cobblestone Publishing, who encouraged me to submit article queries to this group’s family of excellent nonfiction and fiction magazines.

It was one of the articles that I wrote for Cobblestone, called “We Shall Overcome,” about music during the civil rights period, that led to We’ve Got a Job.

As a nonfiction writer, how did you approach researching your topic? Then, how did you find the story, the focus, amidst all of your acquired subject matter?

I started by reading. Fortunately, much has been written about the civil rights movement, not only in general but also in Alabama and, in particular, Birmingham. The events there were so melodramatic—beatings, hoses, dogs, jails.

I started with two hefty Pulitzer-prize-winning tomes and, then, went on to other prize-worthy texts, including children’s books (though, at the time, nothing was available for kids on the Children’s March). I read solidly for three months.

At about that time, I discovered the Birmingham Civil Rights Institute (BCRI), which has an excellent website, and, even better for my purposes, video interviews with hundreds of civil rights activists. I watched snippets of these interviews online and read many dozens of transcripts.

Finally, I was ready for my first trip to Birmingham. In addition to spending days in the BCRI and Birmingham Public Library archives, I wanted to meet the people I was reading about.

But, as a new writer, with only magazine articles to my name, I felt like an encyclopedia salesman making cold calls. Would busy, professional people be willing to meet with me to talk about events of 45 years ago?

Many, many did! I interviewed not only black people who had marched in 1963 but also white people, including a policeman, about their perspectives. This trip convinced me that onsite research is invaluable. 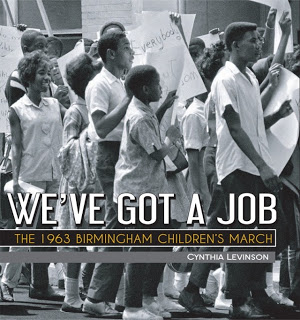 But, you’re right, Cyn. All of this research produced a welter of material. How to make sense of it?

Two tasks were especially instrumental in that process.

First, on large poster sheets, I bullet-pointed six or eight major themes that surfaced from the research. One stated, “Birmingham was the most violently segregated city in the country.” Another, “The Civil Rights Movement was deteriorating.”

These statements formed the basis of my initial outline, which transmogrified into my first proposal. At that point, the book was going to be an overview of the Children’s March with supporting quotations from many different marchers.

The second step took me by surprise and required many, many more months of research, two more trips to Birmingham (one with my editor), and a complete revision of the proposal.

Here’s what happened. An editor who was interested in the book (but who, ultimately, was not able to buy it) suggested in an editorial letter that I tell the story through the voices of two or three marchers. Aha! Great idea. But, how do you do that?

It took a year before I found the exactly right four people (the story is so layered that two or three were not enough) who were willing to tell their stories.

Audrey, Wash, Arnetta, and James did a beautiful job.

Cynthia Y. Levinson interviewed dozens of participants in the Birmingham Children’s March and spent four years researching and writing We’ve Got a Job to share their stories.

A former teacher and educational policy consultant and researcher, she has also published articles in Appleseeds, Calliope, Dig, Faces, and Odyssey. She divides her time between Texas and Massachusetts.

Join Cynthia at 3 p.m. March 4 at the George Washington Carver Museum and Cultural Center, 1165 Angelina (near Kealing at the corner of Angelina and Comal) in conjunction with BookPeople in Austin for a celebration of the release of We’ve Got a Job. The event will include a presentation, reading and refreshments.

Who Are You, Really? by Cynthia Levinson from Hunger Mountain. Peek: “Had these extraordinary people not allowed me to immerse myself in their
lives, I would have stereotyped them and their city. I would have
overlooked the gradations that angled their varying politics, actions,
friendships, and conflicts across a blurry but unexpectedly wide
spectrum.” See also The Day Job: Cynthia Levinson by Erin Robinson/Erin E. Moulton from A Writer’s Inquiry.

One Reply to “New Voice: Cynthia Y. Levinson on We’ve Got a Job: The 1963 Birmingham Children’s March”