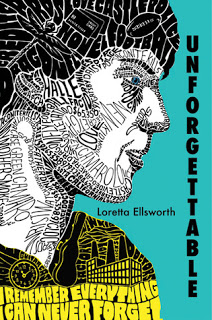 When my book Unforgettable (Walker, 2011) was released in September, I hosted a giveaway on my blog. Readers had to write about their earliest memories.

It was fascinating reading them because they reflected a great deal about the readers and their childhood. I thought most of them would be from very memorable events – mine was when I was a flower girl in my aunt’s wedding – but I was surprised that many of them were very ordinary: watching a big brother come home on the school bus, picking strawberries, sitting on a father’s lap while he read the newspaper, the pattern of a linoleum floor or the diamond shape of a doorknob, riding in a crowded car with Italian relatives.

Not extraordinary days or events, but simple pleasures or observances from their childhoods.

Very nostalgic memories, which made me wonder: If we could hold onto our childhood memories forever, would we? Is the ability to forget just as important as the ability to remember?

Most of us would agree that not all memories are good, that there are some things we definitely want to forget. One reader’s earliest memory was of her father hitting her mother. Others remembered getting stitches or the pain of losing a family member. But they didn’t say they wished they didn’t remember those things. Perhaps bad memories serve a good purpose as well, if only to remind us that we survived childhood despite such obstacles.

Unforgettable explores many of those issues. Baxter has a perfect memory. In fact he’s unable to forget anything, including his father’s death when he was three years old.

Not only does he remember it, but he also experiences the pain of it just as fresh and sharp as when it happened.

When he and his mom, on the run from an ex-boyfriend with a serious grudge, move from California to Minnesota, Baxter reconnects with Halle, a girl he had a crush on in kindergarten.

At fifteen, those feelings are so real and strong to him still that it’s confusing when she doesn’t remember him at all.

The mixed blessing of Baxter’s memory and his determination to hide it reflect how I often felt in high school – I didn’t want to stand out from the pack and preferred to be invisible.

But for Baxter, things aren’t as simple as that. Hiding a photographic memory is difficult, and starting over isn’t easy, either.

Recently it was revealed that Katia Zatuliveter, the suspected Russian spy being tried in London, has a near photographic memory. She supposedly could read something once and memorize it. A former college classmate said that was how she kept ahead of the class.

Most of us won’t ever have to worry about being accused of having such a memory. But it’s an interesting issue, one worthy of discussion.

Our memories reflect who we are, but how much do we really want to remember? If there was a pill available to give us that kind of recall, would we take it?