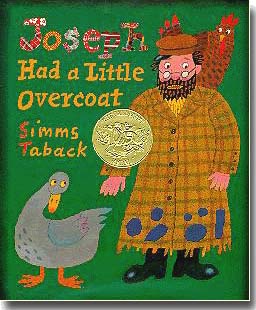 From his official author bio:

Among the 40+ childrens books he wrote and/or illustrated, Simms’ books have won many awards, including the prestigious Caldecott Medal for Joseph Had a Little Overcoat.

Simms received a Caldecott Honor for There Was An Old Lady Who Swallowed a Fly, one of two books designated as New York Times Best Illustrated Children’s Book, and the Children’s Book of the Year selection from The American Institute of Graphic Arts (AIGA).

Simms was a lifetime member of The Society of Illustrators and The Graphic Artists Guild.

A retrospective of Simm’s work is currently on display at the Museum of Ventura County, Ventura California, until Feburary 12.

Caldecott Winner Simms Taback Dies at 79 by SLJ staff from School Library Journal. Peek: “Taback died from pancreatic cancer, which he had been fighting for over a year, but he managed to fulfill his dream of traveling to Israel and London before his death.”

2 Replies to “In Memory: Simms Taback”