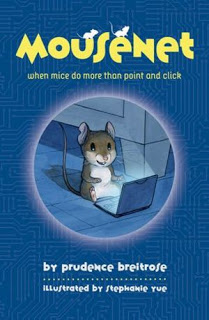 Prudence Breitrose is the first-time author of Mousenet, illustrated by Stephanie Yue (Hyperion, 2011)(author blog). From the promotional copy:

When ten-year-old Megan helps her uncle invent the Thumbtop, the world’s smallest computer, mice are overjoyed, and they want one for every mouse hole.

The Big Cheese, leader of the Mouse Nation, has orders: follow that girl—even if it means high-tailing it to Megan’s new home on the other side of the country. While Megan struggles as the new girl, the mice watch, waiting for their chance. But when they tell Megan the biggest secret in the history of the world—mice have evolved, and they need her help—she isn’t sure anyone will believe her.

With all of Mouse Nation behind her, Megan could become the most powerful girl alive, but just how will she create a Thumptop for every mouse?

Brought to life with whimsical illustrations, Prudence Breitrose’s debut novel is full of charm and adventure and will captivate today’s computer-savvy middle-graders.

In a sense, the research process approached me in a dream that confused computer mice with the real thing. That led me almost seamlessly into the world of the rapidly evolving Mouse Nation, with its complex systems of governance and education and communication.

True, where mice were concerned, I positively avoided biological research so that I wouldn’t have to face up to certain inconvenient truths, such as their short lifespan and their inability to discipline poop. But I wanted everything else in the book to be as fact-based as possible–to give my speculative fiction the most solid of foundations.

With the help of Google, I scoured airplane and Greyhound timetables to make sure my characters’ travel plans made sense; checked height limitations at the Great America theme park to verify that my Megan was tall enough to ride the Demon; found the correct names of local newspapers; and knew the venue where rock groups perform in Eugene, Oregon.

I even annoyed my editor by pointing out that in an illustration showing a Thumbtop computer strapped to the back of a mouse, the Velcro was only about 1/8th of an inch wide whereas–according to my research–the Velcro company made nothing narrower than 1/4th of an inch. (She won that round).

My most intensive research involved climate change, which is a major theme of the book. I don’t include much hard environmental science, but the book does assert as a given (through the Big Cheese, my mouse leader) that climate change is happening, and that human activity is responsible. To back up my mouse, I worked my way through a half-dozen climate books, and my computer is set to produce instant facts about (say) the melting rate of Greenland glaciers, or why the Medieval Warm Period wasn’t all it was cracked up to be.

That’s not because I doubt the wisdom of the Big Cheese (mice know everything) but in case I have to defend him: I had visions of climate-skeptics complaining noisily that children were being brain-washed (by Disney, no less) into believing unproved theories that in their view had been cooked up by Al Gore and his scientist cronies to make money.

Please note that my main goal in adding the environmental theme was not to provoke. I fervently want to help children accept the facts about climate change and know that they can do something about it. But a little provoking wouldn’t hurt.

Consider The Higher Power of Lucky by Susan Patron (Simon & Schuster, 2006). All it took for that book to be banned in certain school libraries (and celebrated on NPR and in the New York Times) was the mention of one dog scrotum. Surely climate change could get Mousenet a little of the same treatment? Rush Limbaugh? Glenn Beck? Anyone?


How did you go about connecting with your agent? What was your search process like? Who did you decide to sign with? What about that person and/or agency seemed like the best fit for you? What advice do you have for other writers in seeking the right agent for them?

No offense to my agent, who is the best, but I didn’t do a lot of deciding. After years of rejection from almost every children’s agent in the business, I would have agreed to be represented by a ham sandwich. Any “deciding” was on the other side.

When I’d finished the first draft of my book in 2003, and considered it perfect, I sent off query letters to six children’s agents. Five replied with rejections, but one asked for the first 50 pages. On the strength of that sample, he asked for the complete manuscript which I sent without an SAE because hey, the book was as good as sold. Right?

I heard nothing for weeks. Months. At this time, let it be said, I was working in a ridiculous state of isolation. I hadn’t joined a critique group because I thought criticism could squash the fragile flower of my creativity. I wasn’t reading current children’s books because I was afraid that a) I might inadvertently plagiarize or b) I would be so intimidated that the fragile flower of my creativity would wilt. I didn’t even dare try out the book on the nine-year-old next door, because what if she didn’t like it?

And I didn’t dare e-mail the agent to ask what he’d thought of the book. My response to him (as to all subsequent agents who turned me down) was internal. Surely he must have disliked such and such an angle in my story? No problem, I could fix that. Maybe he didn’t like that particular character? I’d throw her out.

In six months, I’d corrected the imagined faults so that now the book was really perfect, and in the fall of 2003 I e-mailed the agent with that great news. Yes, he remembered that book. By all means, send the new version along,

And so I did. And again, silence for months and again, I thought my way into his brain. Maybe he would have liked more adventure? No problem. I could add adventure. A visit to the Headquarters of the Mouse Nation–that would provide the oomph that was missing.

In the spring of 2004 I was still busy adding adventure when the agent’s assistant called to ask if the manuscript was still available. Was it ever! She gave me her own comments–the mice were fine but my humans weren’t sufficiently differentiated. No problem! I spent a month differentiating humans and off went the manuscript again. Surely this time, with extra adventure and better humans?

And indeed there was a response this time, in the form of a rejection letter: “While I am impressed by the storyline changes, ultimately this just isn’t ringing true for me.”

Yes, she liked the mouse world “that you have imagined so vividly,” but “the characters and the dialogue, while improved, are still not on the level that I think is necessary.”

This letter should perhaps have been the signal to give up. If I, as a human, couldn’t write humans, was there any real hope? Was it time to try a picture book? Tiptoe into the fertile fields of YA? Find a co-author for Mousenet who could help me with the human thing?

But I thought it worth one more try, even if that turned into several more tries. Once a year, more or less, I would discover a new angle, or shoehorn a new adventure into the plot, or have my humans try on new personae. And with each version I would invent new ways to approach agents. “I see your agency has moved to Palo Alto. What a co-incidence, that’s where I live!” Or “I see in a profile of you that you have red hair. What a coincidence–so does my protagonist!” And sometimes these agents would consent to read the first chapters, but no more. 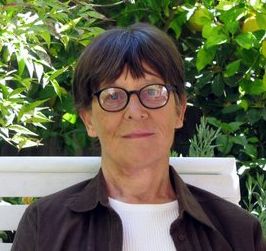 Socially, these years had their awkward moments when I had to admit that, yes, I was still working on that mouse book. The looks were pitying.

I was known as a good writer, inventing crisp new ways to get health information into people. But a mouse book might be beyond me. Just a nice hobby that kept me off the streets.

Seven years after I’d started the book, my husband and I were passing through Amsterdam, and had dinner with an ex-student of his, a woman of the new age persuasion.

Like most people who are not agents, she was fascinated by the outline of my story, and asked the simple question: once mice prevailed upon my ten-year-old human to help them get computers, wouldn’t they then have a fantastic opportunity to do good? How could mice best make use of all that power?

Once I thought about it, the answer was obvious, because I’d been deeply influenced that year by “An Inconvenient Truth,” and had followed it up by reading a couple of climate books. Mice would slow down the rate of climate change. Once I had that environmental thread to weave gently through Mousenet, a crisper plot clicked into place. 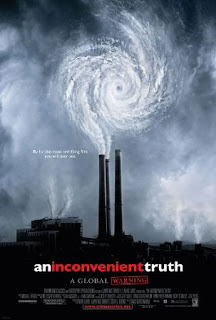 And there was something else. Either I’d spent enough time with the characters to know them inside and out, or I’d finally taught myself to write, or both. My humans came alive.

Six months after Amsterdam I had a new version with a sprightly new title: Megan Saves the Planet. I e-mailed the original agent. Could he bear to see it, one more time? Sure, he wrote. One more time. I sent off the manuscript but again heard nothing for almost three months.

Then came the phone call on a Thursday evening with my husband away at an academic meeting in Brazil and only the dog to freak out with me as the agent said, “What happened? It’s great! We don’t want to change a word, except for that terrible title, which has to go.”

He handed me off to a new junior agent* so I had the best of both worlds: a big name agency, plus the energy of someone with all the time and enthusiasm in the world. And she sold Mousenet a few weeks after she started trying. 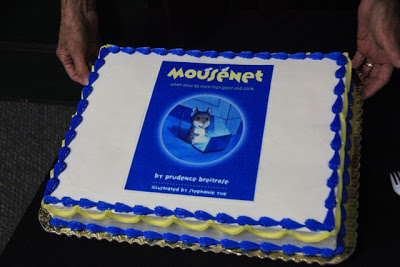 *Prudence says: “This agent moved to Europe and I am now with a senior woman in the agency who is perfect.”

Silicon Valley’s second acts can lead to surprises by Mike Cassidy from the Mercury News. Peek: “The promise of Silicon Valley is that it’s a place for second acts and reinvention; a place where age doesn’t matter, as long as you’re creative enough; a place where believing in yourself is half, OK maybe one-quarter, of the battle. Prudence Breitrose knows all of this. She just published her first book — at age 77.”