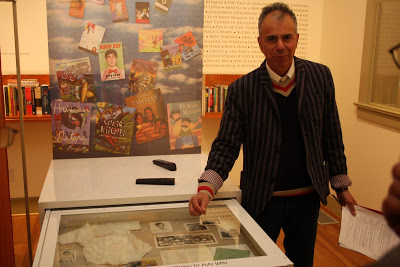 Gary Soto has two new books this fall, the e-novella When Dad Came Back (University Press of New England) and the short story collection Hey 13! (Holiday House). Earlier this year, he celebrated the opening of The Gary Soto Literary Museum.

Even though the museum is housed in Fresno, I suspect its value will spread through California and beyond. How do you see the museum being most useful to those who enter?

First, the museum is tidy—seven-hundred square feet—and it’s not techie, though there will be a video of me welcoming the visitor and talking about my decision to become a poet and writer.

Museums, by nature, are places where one goes to see human and natural expressions, most particularly in the shape of art or historical work, though museums can be devoted to all sorts of things, even barbed wire—I think there’s such a museum.

Mine is literary, and mine has a story to tell about a little boy with gaps in his education who became a writer. I’m hoping that the visitor will be curious, not unlike when someone goes to another person’s house for the first time—you look around and learn something about that person. We’re curious creatures, right? 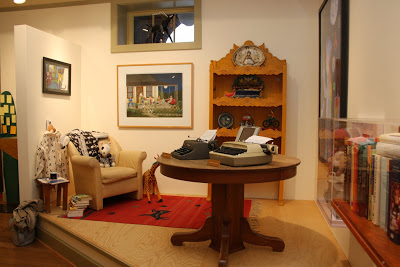 I’m hoping the museum offers mystery, and by this I mean that feeling we get when we don’t know the answers but sort of have clues. Thus, we’re left with wonderment. I can see—and hear—visitors whispering, “So this is where he wrote Chato’s Kitchen?” when they see the dining table where I worked on a lot of my books. 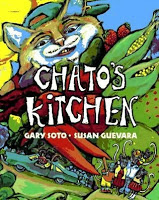 Moreover, mystery will certainly bewilder the visitors when they look at my fourth-grade report card from St. John’s Elementary School and see all the “unsatisfactory” marks in composition, in social studies, and in religion—not even God was liking me a whole lot!

Then there is my teacher’s comment: “Gary dreams to[o] much in class!” Finally, on the bottom of my report card the dire prediction: “promotion doubtful.” Who would ever guess that I would enter college, move course by course on schedule and become a writer? Ah, that word again… mystery.

When did the idea for this project begin to formulate in your mind?

When I first visited England in the mid 1990s and ventured into the Samuel Johnson house—Johnson of the dictionary fame, the wit, the raconteur, and essayist par excellence.

I’m not making a comparison—Johnson, Soto… No, but on the first glimpse of this master’s museum, which showcases very few items that actually belonged to him, my face lit up. My God, I told myself, here’s the chair where he wrote his dictionary—see how little it takes to entertain me? 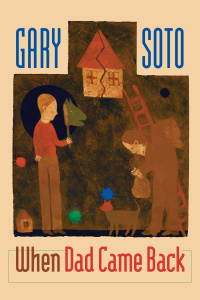 In 1995, I had published about fourteen books—poetry, essays, children’s lit.—and more books were forthcoming. I’m not suggesting, of course, that I wrote books to argue a case for a museum.

No, but as I got busy because I enjoy writing and got to know my readers, here in California and beyond, I could see how much kids love to read, and how they responded to my goofy and occasionally sad stories and poems. I’m now at an age where I don’t have enough energy to gas up my car or book a SW flight to travel about. My readers now have an opportunity to come and see for themselves.

What has been the response to the museum?

Other writers either loathe the project or, when they set their wine glasses down and become sober, are suspect—“Gee,” they think, “when did Soto die?” After all, there is no museum dedicated to living writer in this country—or so I believe. My motive is clear: to organize my literary output in such a manner that it makes sense to the visitor. It’s a place that makes a claim that writing—and reading—is serious business.

What aspect of the museum are you most proud of?

The design. It was conceived and built by Jonathan Hirabayashi, who has worked on numerous large projects in California and beyond, and has a really fine sense of museum design and concept. He also is blessed with patience. Without him, it wouldn’t have gotten done.

Moreover, I can’t forget that the museum is located in the refurbished Old Administration Building at City College. It’s lovely beyond words.

What are your plans for the future of the museum? How do you see the museum in ten years?

Probably out on the streets as I have a ten-year contract with the college—I’ll display my wares for this time period and then the college and I will weigh whether we should continue. I know we’re going to get lots of children—five hundred a month, they estimate. I’m eager to find out what the kids will think of my old Royal manual typewriter, circa 1945. They might think it’s a part that fell off a car motor.

When did you decide to become a writer? 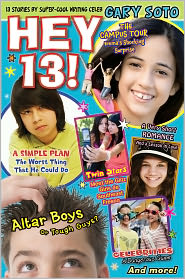 I was at Fresno City College, in love, and in a sort of pillow-hugging love, when I was turned down by this girl. Crushed, I ventured into the library and found myself in the stacks that offered up poetry. I turned to poetry to heal my little Valentine of a heart. This was 1972, March I recall, with the scent of spring in the air but no one for me.

The first poem I wrote after the encounter with these books of poetry was called “The Little League Try Outs.” It was published in our campus magazine and can be found in one of the drawers at the museum.

What are in the drawers?

You’ll have to come and find out. But I will say that the top drawer holds, among other items, my baptismal gown and a blanket that I hugged in babyhood. Oh, yes, there is also a pile of pinto beans. What are they doing there? The pinto beans were my first toys—my army men that I played with in the dirt. From simple things come simple but meaningful pleasure and memory.

The poet who influenced you in your early years?

Pablo Neruda, the master of image making and a soul as large as a fish-frenzied sea. My brother, Rick, gave me his Selected Poems when I turned twenty-one, a gift that I’ve kept ever since and is in the museum—the cover, the visitor will note, is torn off from wear. The pages are dark from my reading this book over and over.

How many books have you written?

Forty-three, of which twenty are out of print and some barely hanging in there. I also have five other manuscripts—poor efforts, I’m afraid—in a drawer. On a cold winter day, they might go into the fire and do some service by warming my body. Also, I have hung up my moonlighting job as children’s and young adult writer. 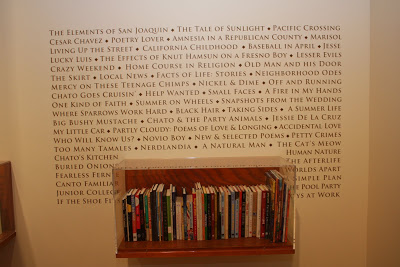 What are you working on at this moment?

I have several books for younger readers under consideration at a publisher, and am toying with a book of poems for adults titled The Sudden Loss of Dignity, work that amplifies my status as old man. No, wait a minute, I’m hasty—I’m still in the category of middle-aged man. I enjoy where I am.

What are your favorite books?

My favorite novel is Madam Bovary by Gustave Flaubert (1856). My favorite series of novels is Galsworthy’s Forsythe Saga (1906-1921). The best literary effort in any language during the past ten years: the riotous Absurdistan by Gary Shteyngart (2006).

What advice do you give those aspiring to become writers? 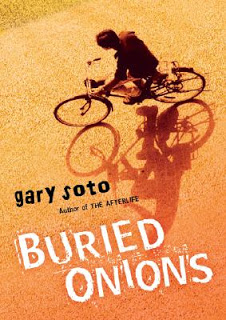 Don’t do it! You’ll go to the poor house! Okay, I check myself when a young person hints—or brays—that he or she wants to become a writer. It’s an iffy proposition, especially in the age of Kindle and other electronic gizmos.

I’ve known many younger poets and writers who start off with high expectations and then realize that writing is a serious calling, one that involves creating work year after year until your hair has grayed and your teeth have become wobbly in your skull.

However, in truth, I haven’t had too many aspiring types approach me with his question, a relief I must admit. I don’t teach, I don’t carouse with other writers, so the question seldom comes up. But when it does, my best advice is for them to read other writers. Read constantly, read widely.

I often don an apron and bake drop cookies for friends and visitors.