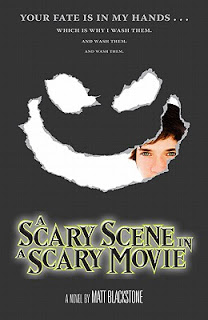 Matt Blackstone is the first-time author of A Scary Scene in a Scary Movie (FSG, 2011). From the promotional copy:

If he picks up a face-down coin, moves a muscle when the time adds up to thirteen (7:42 is bad luck because 7 + 4 + 2 = 13), or washes his body parts in the wrong order, Rene or someone close to him will break a bone, contract a deadly virus, and/or die a slow and painful death like someone in a scary scene in scary movie.

Rene’s new and only friend tutors him in the art of playing it cool, but that’s not as easy as Gio makes it sound.

While sometimes it’s tiring spending my day with high school students and my evenings writing about them—parents of teenagers, who spend their entire days with their children, I salute you and bow in awe—it’s definitely a blessing being a teacher-author.

Each and every school day, I am reminded of the irrational and entertaining dynamics of girl/boy drama, I have their voices in my head, I know what’s in, I know how they speak—at least, I know how Bronx teenagers speak, which, come to think of it, isn’t at all representative of the rest of the country. If it were, then everyone would use words like “whack” (crappy), “wavy” (cool), “O.D. wavy,” (an overdose of cool) “violate” (insult) and “O.D. violate” (insult someone in a way that can never, ever, ever be forgiven).

Thankfully, my students are forgiving. When I test out new material on them during independent reading time, they usually say nice things. If they think it’s crap, they let me down easy, never O.D. violating me. For the record, there have been a few, infrequent violations, but never anything close to an O.D. violation.

I don’t think I could write without teaching. How do I know? Because my summer writing isn’t nearly as authentic. Okay, that was way too forgiving.

My summer writing is whack. Without my daily reminders during the school year, I forget how they speak, what they care about, how they react, how they think—and I just become a 30 year old man pretending to be young again, not that there’s anything wrong with that . . . it just isn’t very effective.

I simply can’t write without teaching. And, I’ve learned, I can’t teach without writing.

An admission: I used to lie to my students. A lot. As a young teacher in the inner city, I spent most of my first few years of teaching lying about my age, my birthplace, my hobbies, my background (I might’ve once said that I was in a gang . . . and I’m certain that I said in the military. And the Marines). But I’ve found that you can’t lie in your writing.

And that, in turn, has led to a more truthful and sensitive teacher. Exploring the inner-workings of troubled teens in my writing has definitely mellowed out my militant front at school. It has also helped me identify teen bullies, victims, real friends, fake friends, and those who could use a friend, or a teacher, to talk to during lunch.

And now I can’t do one without the other. If I’m teaching without writing, I’m unhappy. If I’m writing without teaching, my writing becomes an overdose of whackness. Yes, I may have butchered that phrase, but the school year has now started, and there are plenty of 10th graders waiting to put me on the right track. I only hope they can say the same about me.

For years—three, maybe four, okay probably five—all I wanted was a book contract.

I would’ve have done anything to get it: put my soul on the open market, do cartwheels on flaming stones, eat a jar of mayo, denounce my love of the Phillies, accept bribes and teach my 10th graders that reading is for suckers, that Cheetos are healthier than carrots, that the principal is a rhinoceros, that true love is a bunch of hokey boloney unless it’s on “The Bachelorette,” that the economy has never looked so sexy, that cooties are real, that college is the devil, and that I am really a very manly woman.

If only I had a manuscript to edit. An acceptance letter, however corny the story, to open and read and frame, instead of a mountain of rejection letters piled so high on my desk that if I breath or cough or sigh with enough gusto the entire mountain will collapse on me like an avalanche and crush me and cover me in my own rejections and failures and nobody will hear me scream and I’ll die a slow and painful death, which newspapers will find fascinating and therefore report, on the front page in big bold lettering, “MAN DIES OF FAILURE; NOT HEART FAILURE, JUST FAILURE.”

And then an agent finally said yes—at first I thought the email said, “jes,” as in Jessica, which isn’t my name—a few editors also said “yes” not “jes,” and I was spared the headline. Still, it was hard to talk about. It made me irritable, itchy, like red ants were crawling up my thigh. I didn’t recognize my voice; no matter what I said, I sounded fancy—no, foncy—like I had a British accent, played a smashing game of Polo, and ate only “mixed greens,” and only with a salad fork. I told myself, “Self, yeah you, you’re not British; tell them the truth: your favorite food is hot dogs, you own one pair of jeans, suffer (sometimes for weeks) from writer’s block, and like to the sing “Poker Face” while washing your face in the shower.

But, I’ve learned, you have to talk about it. Not your Poker Face, your book. You have to sell yourself, even if the self you’re selling isn’t Mr. Foncy Ponts. This I realized early on in the process—and again a few months before my book came out and my book reading/signing schedule was . . . well, it wasn’t really a schedule, per say . . . it did say, “Matt’s Reading Schedule” at the top, but . . .

Cue Steven Colbert, adjusting his glasses, trying hard not laugh: “Nation, in the history of civilization, there are many men who rose above their circumstances and truly lived the American Dream. And then, Nation, there are those who saw the promised land, enjoyed the view, got this close [pinches the air] . . . and failed miserably. Like this guy. Matt Blackstone. [Cue my author photo].

I wasn’t okay with that. I had to get my book out there. I believed in its message (I wrote A Scary Scene in a Scary Movie for the outcast teens I teach). I believed that teenagers would enjoy and benefit from the story. I believed in my ability to present it. And I was tired of Colbert mocking me.

So I sat my butt in a white chair at the end of June and I emailed. I called. I visited stores. I stopped by libraries. I wrote letters. I contacted schools (and all their English teachers). I emailed the state of California. And half of New Jersey. I skipped breakfast, and then lunch. I called principals, superintendants. I mailed letters and books and flyers (Linda, at the local post office, thanked me for keeping her in business). I reached out to my friends, and their friends, and friends of their friends and their Facebook friends, and spent entire days on Gmail. I slept when I could no longer see. I ate dinner at my desk. I don’t know for sure how much time elapsed, as days blended quickly but passed slowly, but I was told it was more than six weeks.

Eventually, my wife staged an intervention. Threw me in the shower. Reacquainted me with washing machines and deodorant. Escorted me outdoors. Introduced me to the sunshine. The sound of birds. The taste of strawberries. The satisfaction of sleep.

Now, as I write this article, my precious teacher summer is over. But I learned an important lesson about self-promotion and hard work. And what it takes.

A total of 35 Fall events. Can’t even keep a poker face. The number makes me smile. 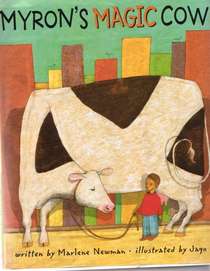 Marlene Newman, author of Myron’s Magic Cow (Barefoot Books, 2005). Aside from being a talented and hilarious writer, Marlene is a perfect writing partner. She’s honest. Smart. Witty. Creative but grounded. Tough but forgiving. Critical but complimentary. Nitpicky but always manages to see the big-picture.

She writes and edits for a purpose, and lives her life the same way. It’s an honor to call her my mentor, cousin, and friend.