I never got to meet Siobhan Dowd.

I only know her the way that most of the rest of you will – through her superb books.

Four electric young adult novels, two published in her lifetime, two after her too-early death. If you haven’t read them, remedy that oversight immediately.

This would have been her fifth book. She had the characters, a detailed premise, and a beginning. What she didn’t have, unfortunately, was time.

When I was asked if I would consider turning her work into a book, I hesitated. What I wouldn’t do – what I couldn’t do – was write a novel mimicking her voice. That would have been a disservice to her, to the reader, and most importantly to the story. I don’t think good writing can possibly work that way.

But the thing about good ideas is that they grow other ideas. Almost before I could help it, Siobhan’s ideas were suggesting new ones to me, and I began to feel that itch that every writer longs for: the itch to start getting words down, the itch to tell a story.

I felt – and feel – as if I’ve been handed a baton, like a particularly fine writer has given me her story and said, “Go. Run with it. Make trouble.” So that’s what I tried to do.

Along the way, I had only a single guideline: to write a book I think Siobhan would have liked. No other criteria could really matter.

And now it’s time to hand the baton on to you. Stories don’t end with the writers, however many started the race. Here’s what Siobhan and I came up with. So go. Run with it. 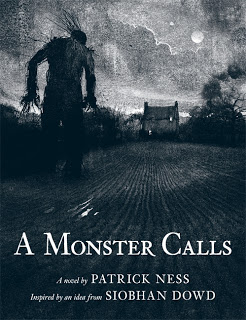 From the copy for A Monster Calls: Inspired by an Idea from Siobhan Dowd by Patrick Ness (Candlewick, 2011)(sample chapter):

At seven minutes past midnight, thirteen-year-old Conor wakes to find a monster outside his bedroom window.

The monster in his backyard is different. It’s ancient. And wild. And it wants something from Conor. Something terrible and dangerous. It wants the truth.

From the final idea of award-winning author Siobhan Dowd– whose premature death from cancer prevented her from writing it herself– Patrick Ness has spun a haunting and darkly funny novel of mischief, loss, and monsters both real and imagined.

An unflinching, darkly funny, and deeply moving story of a boy, his seriously ill mother, and an unexpected monstrous visitor. 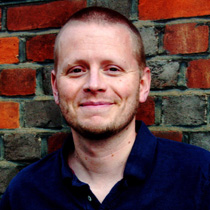 Patrick adds: “Using someone else’s ideas as a starting point for a whole book is such a strange experience, but in this instance, I ended up finding it exhilarating.

“Siobhan was so good, so smart that it felt like a private conversation between us, one with smiles and laughter, as I’d say things like ‘Wait until you see this!’ as the story grew and lived.

“Sad, of course, beyond sad that there’ll be no more Siobhan Dowd novels, but also a thrill and a privilege to be able to take this final idea that she was so excited about and watch it blossom. A once-in-a-lifetime experience.”

Patrick Ness is the author of the critically acclaimed and best-selling Chaos Walking trilogy. He has won numerous awards, including the Guardian Children’s Fiction Prize, the Booktrust Teenage Prize, and the Costa Children’s Book Award. Born in Virginia, he lives in London. Listen to an audio interview with Patrick by Jason Isaacs of “Harry Potter” fame about A Monster Calls.

Siobhan Dowd spent twenty years as a human rights campaigner for PEN and Amnesty International before her first novel, A Swift Pure Cry, was published in 2006. She won the Carnegie Medal posthumously in 2009 after her death at the age of forty-seven.

Follow the rest of Patrick’s tour this week at:

5 Replies to “Guest Post: Patrick Ness on A Monster Calls: Inspired by an Idea from Siobhan Dowd”