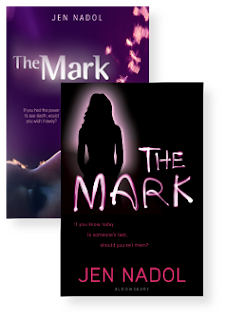 You’ve got a great story concept. The minute it comes to you, scenes start unfolding in your head, plot points filling in faster than you can remember them. You grab a piece of paper and jot down ideas before they slip away.

You start writing. Chapter after chapter. Some easier than others, but still with that exhilarating sense that this is a winner. A story that will sell. Something new. Fresh.

And then one day you’re walking through the bookstore or scrolling through Publishers Lunch and you see it: your concept, already on the shelves or listed in the latest deals.

Has this happened to you?

It’s happened to me. Twice.

My debut novel, The Mark (Bloomsbury, 2010), was finished and in production when I heard about not one, but two other YA books coming out within a few months of it with nearly the same concept.

Take a look at these descriptions:

The Mark: Cassie knows when someone is about to die. Not how or where, only when: today.

My Soul To Take by Rachel Vincent: She doesn’t see dead people, but she senses when someone near her is about to die.

Numbers by Rachel Ward: When Jem Marsh looks into a person’s eyes, she sees the date of their death.

Oh, no! I thought. My new, fresh, exciting idea has already been used!

It was an agonizing, terrifying, deflating moment.

What did I do? The only thing I could: after moping around for a while feeling rotten, I ignored those other books. I didn’t look them up again or follow their reviews or sales numbers. And I certainly didn’t read them.

Until now. Two years later I was finally un-chicken enough to take a peek.

Turns out I was right to avoid them. Not because they’re just like my book (fear #1) – they’re not.

But because of the doubt the few similarities would have planted in my head. That insidious, parasitic second-guessing that is a writer’s worst enemy: Should I change that character’s name? Have her live with an uncle instead of an aunt? Cut that line that sounds too much like one in another book?

Re-write this scene? Or what about this one? Make the narrator male? Or instead of a glow, maybe it should be something else…

Fear #2 – that these books might influence my writing – was real. The Mark was beyond my ability to change, but I had a sequel to write, one that wouldn’t benefit from shaken confidence. 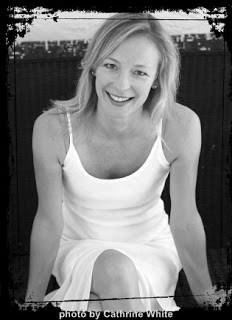 Writing is a leap of faith. It’s one thing to examine your characters and plot to make them as good and authentic as you can. But when you stop believing in yourself and your story and your characters and start changing them just to fit a mold or break one, you lose something essential to the process: your unique voice and point of view.

Writer Audre Lord said: There are no new ideas. There are only new ways of making them felt.

Of course it would be better if no one ever came up with the same fabulous concept you did, but what are the chances of that? And yes, there is probably a saturation point for certain ideas. But if you don’t know of five or ten books already out there, that point probably isn’t close. Vampires have proven there’s ample room for variations on a theme.

So if it happens to you, I say believe in your story and write it anyway. Because even if your basic concept is the same, through your eyes and with your voice, it will still be unique.

At least, I’m banking on that for my WIP, a novel called The Box that was eighty percent drafted when I read about the new Jay Asher/Carolyn Mackler book The Future of Us.

The concept? Teens accidentally see a slice of their future.

The same as my new, exciting, fresh novel. Oh no.

As you might have guessed, I wrote it anyway. 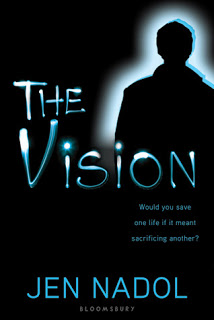 Enter to win an advanced reader copy of The Vision by Jen Nadol (Bloomsbury, September 2011). From the promotional copy:

Cassie Renfield knows the mark tells her when someone is going to die and that she can intervene and attempt to change fate. But she still doesn’t understand the consequences, especially whether saving one life dooms another.

With no family left to offer guidance, Cassie goes in search of others like her. But when she meets Demetria, a troubled girl who seems to have the same power, Cassie finds the truth isn’t at all what she expected. And then there’s her heady new romance with bad boy Zander. Dating him has much graver repercussions than Cassie could ever have imagined, forcing her to make choices that cut to the essence of who she is and what she believes.

The Vision is a riveting sequel to The Mark, offering readers a romance with big stakes and a new ethical dilemma with no easy answers.

To enter, comment on this post and include an email address (formatted like: cynthia at cynthialeitichsmith dot com) or a link to an email address. Or email Cynthia directly with “The Mark” in the subject line. Author-sponsored. Eligibility: U.S./Canada entries only. Deadline: midnight CST Sept. 6.

23 Replies to “Guest Post: Jen Nadol on Oh No! Someone Used My Idea! & The Vision ARC Giveaway”