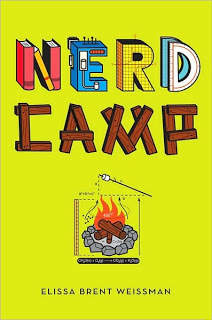 I’m one of those writers who doesn’t like to talk about what I’m working on until I’ve finished it. When I’m writing a novel, that means I can go a year or more without revealing a single detail about what I’ve been doing all day, not even to my husband. It’s kind of like I’m in the CIA.

I’m not mysterious because the book I’m writing is so great I don’t want anyone to steal my idea. In fact, it’s the total opposite. Until I’m done, I don’t know if my idea is any good, or if the story I have in mind will be the one I wind up telling. And since discarded drafts are kind of like embarrassing old boyfriends (I can’t believe I dated that guy), I prefer to hold off on introducing my story to family and friends until I’m at least somewhat sure I’ve got a keeper.

The version of Nerd Camp (Simon & Schuster, 2011) I submitted to my editor is saved on my laptop as NerdCamp6.doc. Nerd Camp 6! That means there are five other Nerd Camps lined up on my hard drive in various stages of completion, plus numerous bits, pieces, and false starts under other names (SmartCamp.doc, SmartCamp2.doc…).

The problem, I think, was that I started with a setting rather than a character. A summer camp for smart kids is a great setting—and Nerd Camp is a great title, you have to admit—but a title and setting don’t drive a story. I needed a protagonist, I needed him to want something, and I needed the readers to want him to get it.

The obvious approach, I thought, would be to write about a reluctant camper: The cool kid is forced to go to “nerd camp,” but he ends up loving it.

I dismissed this idea without even writing a sentence. Not only was it too predictable, but it also wasn’t going to be any fun. If I wrote from the perspective of someone who didn’t want to be there, I’d be portraying the camp in a negative light for most of the book. I didn’t want to put readers in a position to laugh at the nerds; I wanted them to laugh with the nerds, even as they good-naturedly roll their eyes at just how nerdy they are.

I wanted my protagonist to love nerd camp, I realized. I wanted this book to celebrate smart camp in all its geeky glory!

But this raised a new writing dilemma: If my main character likes being at camp from the start, what’s the conflict?

In NerdCamp2.doc through NerdCamp4.doc, some brainy kids face various problems while they’re at a summer camp for academic enrichment. Homesickness, Nerd-Style! The camp is going to be shut down unless the campers use their smarts to save it! You name a summer camp tradition (practical jokes!), and I could give it a smart-kid slant (“Let’s introduce a non-native species to the lake!”), but still, nothing was quite right.

By NerdCamp5.doc, I’d figured it out. I couldn’t call a book Nerd Camp if it was just a regular summer camp story with a smart-kid slant. The fact that it’s a camp for smart kids had to be the story, and the fact that my character loves it had to be at the heart of the conflict.

And so I started writing about Gabe—sweet, endearing, intelligent Gabe—whose love of the Summer Center for Gifted Enrichment conflicts with his longing to be friends with his ultra-cool new stepbrother. I loved Gabe from the moment he took off his bifocals and put on his skeleton pajamas. By NerdCamp6.doc, I knew his story was going to be the one.

So after a year and half of secrecy, I lowered the required security clearance and showed the story to my husband, my agent, and my editor. I let out a huge sigh of relief when they all liked it.

And then, with their input, I began the revision process.

Check out the trailer for Elissa’s previous book, The Trouble with Mark Hopper (Dutton).

2 Replies to “Guest Post: Elissa Brent Weissman on The Evolution of Nerd Camp”