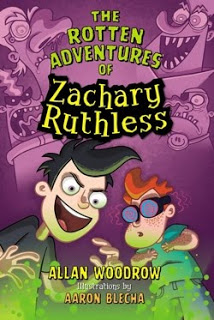 Allan Woodrow is the first-time author of The Rotten Adventures of Zachary Ruthless (HarperCollins, 2011)(author blog). From the promotional copy:

Zachary would do anything to join the Society Of Utterly Rotten, Beastly And Loathsome Lawbreaking Scoundrels, the world’s most horrible gang of super villains. But first he must perform a truly terrible deed.

With the help of his henchman Newt, Zachary battles the horrible Mayor Mudfogg and other felonious foes, not only to join SOURBALLS but to survive! Bwa-ha-ha!

Inevitable? Ha! But it did go quickly, maybe.

It either took me one year to write and sell my debut, or 40-something years, depending on how you look at it.

I’ve wanted to be an author my whole life. I wrote my first book in third grade and got hooked. It wasn’t a long book or a good book or really anything bookish. But it was stapled together with a construction paper cover and I drew a picture on it, so that made it a book in my eyes. I still have it.

For the next few decades, I resisted the voice in my head telling me to write books. I became a writer, but in advertising, and spent my years writing commercials and print ads and eventually, web sites. Occasionally I’d dabble in something else, like when a friend called and asked if I would help write a some documentaries for the Travel Channel, or when a friend was putting together a comedy review sketch show and needed writers.

But the voice never went away. It hounded me and forced me to write short stories and start projects, hundreds of them, and I never showed them to anyone because, well, what if I was told they weren’t good? I had a dream, but as long as I didn’t share it with anyone I could keep the dream intact. Better I hide it, than have it shattered.

Then, one day, I woke up and looked at what I was doing and more importantly, not doing, and realized that it was about time I listened to the voice. By this time, I had a family and elementary school children and had started reading their chapter books and young middle grade books, and realized maybe the reason I hadn’t written a book is that I hadn’t figured out what sort of book I wanted to write. Something sort of clicked.

It was my 2009 New Years Resolution. Write a children’s book and try to get it published. I set goals: three years to find an agent. Five years to sell a book.

I didn’t have an idea, just the drive. So I set aside the same time every night (after the kids went to bed) to write. And I wrote, and wrote, and wrote. Every day, for at least an hour, sometimes a little more.

A few weeks later I had an agent (hurrah for Joanna Volpe) and a few weeks later HarperCollins agreed to publish four Zachary Ruthless books. I got the news a week before Christmas, 2009. Just less than one year after I made my resolution.

So, as you see, when I want to brag, I tell people I wrote and sold a book in less than a year. But really, it took a lot longer. 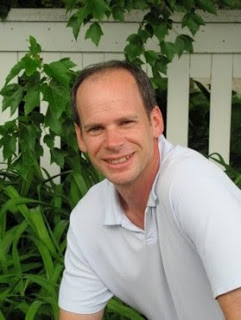 What’s funny? Why is an apple strudel pie in your face funnier than a lemon meringue pie? It’s just because the word strudel is funnier than the word meringue. There’s no reason for it.

Well, it’s because meringue looks foreign and foreign words are never as funny. Vanilla pudding is moderately funny. Vanilla mousse? Nothing at all whimsical about it.

I never write jokes. I’m not good at writing jokes. I don’t think too many people are – I’ve seen my share of unfunny comedians on stage and TV. Even the best ones rely on timing and their personality – and timing is a little more complicated when you’re writing. The meter and the rhythm have to be just right, because you can’t rely on a funny face. And people read things differently because we all have different voices in our head.

So what I try to do is create funny scenarios in which the jokes just come out naturally from what’s going on with the characters. I never think: Oh, let’s put a joke here! It just flows.

If your character has a quirky personality…let’s say wants to be a famous circus gymnast when he gets older, and then finds himself in the middle of a food fight at a five-year old’s roller skating party, something funny is going to happen. Someone is going to slip on a banana peel, or if that’s too cliché, on a piece of apple strudel pie, and that person is going to fly up, and then a roller skate is going to zip off his foot and land under the foot of our circus-wannabee hero, who then slips and finds himself tumbling in the air, does a flip and lands in a perfect split and earns a standing ovation. And that’s how the owner of the circus discovers him and offers him a job.

With the right descriptions, the scene could be pretty funny, in fact, I’m filing this away in my head should I ever write a book about a rolling skating gymnast. You never know, right?

Now let’s create a scene with a group of morticians eating lunch in the stock room. And you want to make this funny. Um, one mortician accidentally puts embalming fluid on his hot dog instead of mustard? I dunno. If you can make this funny, you are a far better comedy writer than I.

So if there’s a secret to being funny: create characters that aren’t too normal – he or she doesn’t have to be zany, just something that will make them react differently than a non-quirky person might, and put them in scenarios where they can be funny or where that quirk can be exposed.

If you introduce a character who is scared of fish, there has to be a scene with a fish in it, and that scene is going to be funny, and there’s no way to stop the funny from coming. I dare you to write a scene of someone scared of fish facing a fish that isn’t funny (and using a piranha or barracuda is cheating). Don’t try to write jokes. It’s just way too hard.