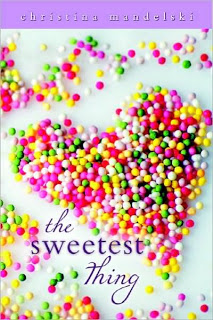 Christina Mandelski is the first-time author of The Sweetest Thing (Egmont USA, 2011). From the promotional copy:

In the world of Sheridan Wells, life is perfect when she’s decorating a cake. Unfortunately, everything else is a complete mess: her mom ran off years ago, her dad is more interested in his restaurant and the idea of a boyfriend is laughable.

But Sheridan is convinced finding her mom will solve all of her problems – only her dad’s about to get a cooking show in New York, which means her dream of having her family back together will be dashed.

Using just the right amount of romance, family and cute boys, The Sweetest Thing will entice fans with its perfect mixture of girl-friendly ingredients.

I would encourage any aspiring author to attend writing conferences and workshops. I have a degree in Creative Writing, but until I was in my 30s I never met a real-live published author and I had no clue how the publishing industry worked.

That all changed in 2003 when I attended my first writing conference. Because I write for children, my experience revolves mostly around events that are hosted by the Society of Children’s Book Writers and Illustrators (SCBWI). Now, I don’t know if it’s necessary for every children’s author to belong to SCBWI, but truthfully, it’s made all the difference in my career. 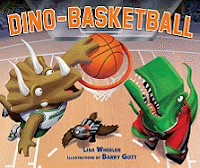 When I attended this first conference, a total newbie, I took the three-hour trek from my home in central Illinois up to Chicago. It was a day-long picture book event that featured an author named Lisa Wheeler, an illustrator named Janie Bynum and an editor named Michael Stearns, (remember that name; it’ll come up again later). The panel spoke not only about the craft of writing, but also about the business of publishing. This was the first time I’d heard some of this stuff – they were a treasure trove of information — and I couldn’t write it down fast enough.

Then, at the end of the day, there was a first-page reading. I’d never participated in one, but it sounded like a great idea – you submit the first page of your manuscript and it is read out loud (anonymously, thankfully) to the entire audience. Afterward, the panel comments on what grabbed them (or did not) about the page.

I’ll admit, I was brazenly naïve. I had written a picture book, and not a very good one, about a girl who desperately wants a pony. Of course, at the time I thought it was brilliant, that I would surely be “discovered” that day. And why not? I love writing with a passion, and it had taken me something like a whole day and a half to write this story. Ha! 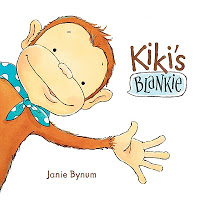 But when my page was read, the assessment, to put it bluntly, was: Not Good. I was devastated. The panel, who was actually very kind, basically explained that there was no story to my story. Who knew a picture book needed plot and character development?

Well, after that, I knew.

Although that particular part of the experience was a little painful, it was an absolutely crucial step to my growth as a writer. That day I learned not only that picture book writing wasn’t as easy as perhaps I’d thought, but that writing is truly a craft, a skill not to be learned overnight.

I also realized that day that there were a lot of other people (my fellow conference-goers), just like me, who wanted the same thing I did – to someday have a book, or an article, or poem, or drawing, in print. Fortunately, they were so welcoming, encouraging and forthcoming, that their numbers didn’t scare me off. Instead, I was inspired by their stories and became more determined than ever to make this dream happen.

I went home with renewed purpose. I studied picture book writing, checked out piles of them from the library, typed their content out on my computer. And soon I realized, I was no picture book writer. Too few words, not enough space to tell the stories I wanted to tell. I needed more room to spread out. So I started my first novel and never looked back.

I finished that novel and continued attending my regional SCBWI events. The conferences are wonderful opportunities to get your work in front of the eyes of agents, editors and other authors.

By the time I’d written novel number four, I was getting positive feedback, and eventually, in early 2009, that fourth novel caught the eye of an editor-turned-agent named Michael Stearns, (see, I told you it’d come up again).

When he offered representation, it felt like some sort of weird cosmic sign, like I’d taken some right steps along the way and was exactly where I was supposed to be. Then when I spoke to him, I knew he was smart, savvy and really nice. I said “yes.”

So yes, I’m a firm believer in attending conferences (if you can’t tell). You never know who you’ll meet, or what you’ll learn that will inspire you or nudge you a step closer to your goal.

Even though I have an agent and a book about to come out, I still attend my regional SCBWI conferences. It’s so good to be amongst writing friends old and new, and let’s face it – there’s still plenty to learn. I recently went to the annual conference in Houston and took pages and pages of notes, and came home inspired and eager to write.

How have you approached the task of promoting your debut book? What online or real-space efforts are you making? Where did you get your ideas? To whom did you turn for support? Are you enjoying the process, or does it feel like a chore? What advice do you have on this for your fellow debut authors and for those in the years to come? 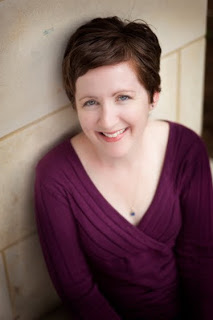 This is an interesting question. I am at least neck-deep in some heavy-duty publicizing of my book.

I know I’ve learned tons, but I also know it’ll be a few more months before I can really sit back, relax and assess the knowledge I’m walking away with. Right now everything’s a bit of a blur.

I know this, though – I’ve learned quite a lot about my own personality over the last year or so. For example, I’ve always understood that I am the exact opposite of a natural born salesperson. I do take no for an answer.

I’ve always been okay with that, but I knew that was going to have to change when it came to marketing my novel.

Naturally, I want it to do well, I want people to enjoy it, I want it to find its way into the hands of my readers. So I began to prepare myself to come out of my non-sales shell and do whatever I could to make this book a success.

For me, this did not include hiring a publicist. It wasn’t in the budget, and I knew this going in. Along with my publisher (which has been wonderful publicity-wise), it was going to be up to me to spread the word about The Sweetest Thing.

The first and best thing I did was join some groups – first The Elevensies, an online community of authors with books coming out this year. This is a large-ish group, free to join, with lots of opportunity to publicize and also privately ask questions and seek advice.

From The Elevensies I got connected with the Class of 2k11. If you’re not familiar, there’s been a Class of 2k-whatever for the last several years. This is a smaller group, there’s a fee, and there’s a bit more pitching-in required.

Both groups have become important to me. If I want advice on anything from number of bookmarks to order (1,000 is not enough!), to how to balance family duties while finishing up a major revision, to what kind of pens to use when signing my book, I’ll go to these people. 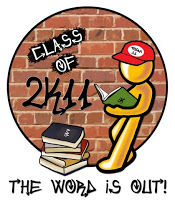 I think, due to our smaller size, I depend more on my fellow Class of 2k11 members to lean on when I’m happy, stressed out, or baffled (or all three things at once, as has happened several times this year).

But despite the necessary support the members of these groups has provided, the One Big Thing I’ve learned is that I can’t do everything.

Early on, I decided that I would push myself outside of my comfort zone and not take “no” for an answer quite so easily. So I talk about my book to anyone who will listen, have gotten to know booksellers and librarians, I contact book bloggers out of the blue and try to think outside of the box for ways to promote my book.

But, right now I’m so busy preparing blog interviews, sending out books for giveaways, planning for my launch party, etc., that sometimes I have to draw the line.

I’ve also had to learn to balance my marketing duties with my writing. Writing the next book, let’s face it, is pretty important – and so some days I have to limit myself to maybe one hour on emails and marketing and interviews, and the rest of the day I devote to my work in progress.

It’s tough to find that balance – but I’m figuring it out.

Another thing I’ve discovered about myself during this process is that while I don’t care much for the hard sell, I do love my book. I love talking about it – and I enjoy talking to people about writing and reading in general — from teachers, to librarians, to fellow writers, to the teens who are my audience.

When it comes to marketing a debut novel, I think that’s half the battle — to be passionate about what you’ve written. Yes, do your homework, seek the support of others in your shoes, and don’t be afraid to step outside of your comfort zone — but above all, believe in your book!

6 Replies to “New Voice: Christina Mandelski on The Sweetest Thing”