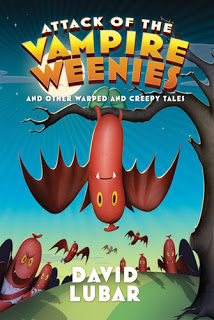 I wrote a blog post in late April discussing how sluggish I’d been about promoting my upcoming book. (I could have mentioned the book’s title in the very first sentence of this post, but I didn’t. That’s how lazy I am.)

The super-awesome Cyn suggested I could pick up the slack by writing something here. Given that her blog has about eight thousand times as many readers as mine (wait — I think I might be multiplying by zero here), that struck me as a good idea.

She felt I should address humor. Or maybe she said I’d look funny in a dress. Since I’m not sure, I’ll go with the former, which doesn’t require that I shave my legs.

After several weeks of procrastinating, I started to think about the actual post. Before I could come up with anything productive, William Shakespeare and Elizabeth Kübler-Ross had a tryst in my head, giving birth to the idea that the piece should involve seven stages.

I have no idea what those stages might be, but I’ll just start listing ideas and stop before I hit eight. Or change the title. Given that I’ve already bitten (or written) through 40% of my allotted word count, you might end up reading “The Three Somethings of Something” or, perhaps, “One Way to Write Humor.”

By the way, I suspect they’re actually not “stages.” They’re more like types or approaches, but I’ve grown fond of the title and have written myself into too deep a hole to back out now.

So we’ll take “stages” to mean platforms, as opposed to steps, thus making all of this slightly less wrong.

Glancing through the stories in my new book, I can see that I use a variety of approaches to humor.

What’s that? You want to know the title? Thank you for asking.

It’s Attack of the Vampire Weenies and Other Warped and Creepy Tales (Starscape, 2011).

As for the approaches, perhaps there are somewhere between six and eight things that come to mind.

(Side note to Cyn: I’m beginning to suspect the piece might run a bit long. Maybe you can post it in two parts and bump James Paterson or James Franco. Side note to Cyn’s readers: Stop salivating. I don’t think Franco is on the schedule.) 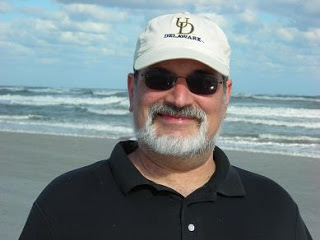 Comic exaggeration is especially easy to do with a first-person narrator. Consider this passage from “Get Out of Gym for Free”: “I figured the gym teacher would be tough, but he looked like he was about to bite off someone’s head and spit it onto the floor. Maybe after sucking out the eyeballs.”

The key is to go overboard, but not so far over the top that there is no anchor to reality. If I’d written, “… he looked like he was about to hurl atom bombs at each one of us,” it wouldn’t work for several reasons, the most obvious being that it’s hard to picture anyone hurling more than one atom bomb. The first would pretty much do the trick.

Those lines come from “At the Wrist.”

Many of the things that happen in my stories are so extreme that there is nothing to be gained from pointing out the severity, but there is plenty of comic potential from treating disastrous events in a matter-of-fact manner.

(Note to Cyn: This stage is intentionally brief, in an effort to make it understated.) 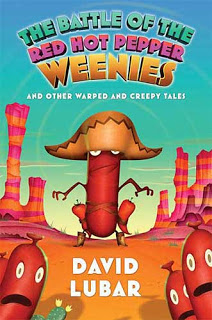 It’s easy to make fun of existing structures, such as fairy tales, fables, or political parties.

(Bonus stage — groups of three can be funny when the third item breaks the pattern.)

For me, these parodies often start out as twisted titles, such as “The Princess and the Pea Brain” (from Battle of the Red Hot Pepper Weenies (Starscape, 2010)) or “Rapt Punzel” (from Vampire Weenies).

Those titles pretty much suggested the funny aspect of the stories. In the first example, the prince was so stupid, he mangled the simple act of placing mattresses on a pea. Instead, he tried to place the pea beneath the stacked mattresses and suffocated. In the second, our heroine watches far too much television. As for her eventual fate, it’s a real head turner.

Which leads us to…

4. Death, and taboos in general

(Note to Cyn: Did you catch the way I cleverly crammed two things into one, so as not to go over seven?)

Speaking of suffocated princes, I wipe out characters at about the same rate that hand sanitizer wipes out bacteria. 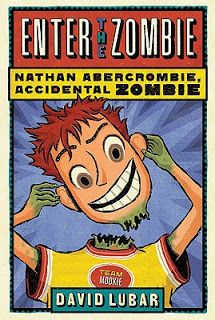 While I cut a swath with my scythe, the manner of death needs to be wonderfully fitting (a lazy kid gets turned into a slug soon after gorging himself on salty pretzels) or amazingly bizarre (a carnival ride turns into a blender).

Death, like all taboo and euphemistically treated subjects, is funny, as long as it isn’t personal. I wrote a whole series about a dead kid. It was a hoot.

As for taboos — anything involving bodily functions, or bodies functioning, has the potential for humor. This is a delicate area for kid’s books, of course. But farts are usually safe and pretty much always funny. Even the stunningly toxic ones my cat has recently been sharing with me.

As for more solid (or liquid) issues, you can always get by with a subtle or understated reference.

We laugh at pratfalls because we’re relieved that they happen to someone else. We laugh at death because we aren’t the victim.

Schadenfreude is not just fun to say — it’s a reality. The relief laugh by itself is generally subdued, since there is that twinge of guilt.

But it can be boosted in various ways, including our next stage.

I can think of two ways that surprises can generate laughter. There is the delightful shock of the jack-in-the-box. But there is also the joy of figuring out the unseen connection or seeing the unexpected solution. A story can be constructed like a Rube Goldberg device, where an action launches a chain reaction.

Humor arises when the reader figures out the unstated connection. Here’s an example from the story, “Cat Got Your Nose?”: “Emily liked visiting Miss Reaker. She made wonderful cookies, as long as you didn’t mind a bit of cat hair among the chocolate chips, and the occasional little crunchy thing that was better left unidentified.”

Given that Mrs. Reaker’s house is overrun with cats, it isn’t hard to figure out where the crunchy things come from.

(Note to Cyn: Yikes, this is getting really long. You might need to do it in three parts and bump that J. K. Rowling piece.)

Here’s a less subtle example. In a work in progress, I have the line: “Even with his face wrapped in black cloth, I had no trouble identifying Jimmy, thanks to a unibrow that could have been mistaken for a climbing rope.” The humor is created when the reader sees the connection between the two objects.

Metaphors are a great way to generate that “ah-ha!” sort of reaction in the reader, and a reliable tool in the humorist’s arsenal.

(Note to Cyn: I couldn’t think of any examples. Note to Cyn’s readers: Really, James Franco is not coming.)

Note from Cyn: Below, see James Franco from The New York Times.

8. (In)consistency, self reference, and meta-statements

I promised seven stages, and by golly, I intend to deliver.

In conclusion, I suspect I overlooked a couple dozen stages. Or types. Or platforms. But I had fun exploring the topic.

Now, if each of you just picks up three or four copies of my new book, I can join Cyn on that bestseller list.

5 Replies to “Guest Post: David Lubar on The Seven Stages of Humor (Or, Good Grief, I Hope You Like It!)”