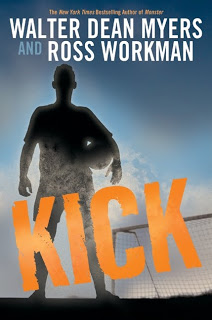 Walter Dean Myers and Ross Workman are the co-authors of Kick (HarperCollins, 2011). From the promotional copy:

For the very first time in his decades-long career writing for teens, acclaimed and beloved author Walter Dean Myers writes with a teen, Ross Workman.

Kevin Johnson is thirteen years old. And heading for juvie.

He’s a good kid, a great friend, and a star striker for his Highland, New Jersey, soccer team. His team is competing for the State Cup, and he wants to prove he has more than just star-player potential. Kevin’s never been in any serious trouble . . . until the night he ends up in jail.

Enter Sergeant Brown, a cop assigned to be Kevin’s mentor. If Kevin and Brown can learn to trust each other, they might be able to turn things around before it’s too late.

Walter Dean Myers is the New York Times bestselling author of Monster (HarperCollins, 2004), winner of the first Michael L. Printz award, and Harlem, illustrated by Christopher Myers (Scholastic, 1997) a Caldecott Honor and Coretta Scott King Honor Book. The inaugural recipient of the Coretta Scott King-Virginia Hamilton Award for Lifetime Achievement, he is considered one of the preeminent writers for children. He lives in New Jersey with his family.

When Ross Workman was thirteen, he wrote a fan email to his favorite author.

When Walter Dean Myers wrote back and asked him whether he would be interested in writing a book, Ross was amazed—and incredibly excited.

Four years later, Ross is seventeen and in eleventh grade. In addition to writing, Ross plays a sport every season: high school soccer in the fall, high school wrestling in the winter, and club travel soccer in the spring. He lives in New Jersey.

Ross, you first contacted Walter to express your appreciation for his books. Which is your favorite and why? 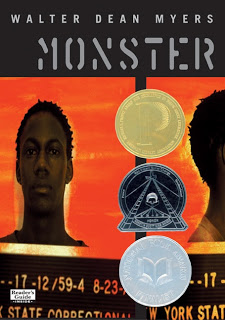 It’s difficult to choose a favorite, because I like so many of Walter’s books. At the moment, my favorite is Monster, but I could easily pick others as my favorite.

After I learned why Walter used the format he did for Monster, I had a new appreciation for the book.

He often visits young people in prison, and he found that the people he spoke to would switch to the third person point of view when talking about their crimes. They wouldn’t take ownership of the crimes. I’m interested in the way Walter writes about Steve Harmon’s point of view.

Ross, it would certainly be flattering to be invited by your favorite author to collaborate–but also a huge commitment for someone already balancing school, sports, family. Did you hesitate? Jump right in? What made “yes” your final answer?

Honestly, I didn’t even have to think about it. This invitation from Walter Dean Myers—my favorite author—was too good to pass up! If I had thought about it, I would have worried more about whether I could actually write a book.

Ross, what surprised you most about writing a novel?

I had always thought that writers just sat down at their computers and the words just came to them and they wrote.

It’s not like that at all. There’s a lot of thinking involved before you even write a word. And sometimes just coming up with the right phrase or sentence can take a long time.

But I guess the most surprising thing was how much work there is to do after a book is accepted, and how much work an editor does. There are a lot of stages of the book to look at.

To both, what were the biggest challenges of collaboration?

Ross:   Trying to make sure my writing was good enough to appear in a book co-written by Walter Dean Myers. I wanted to do my best.

Walter: I’m so accustomed to going my own way that I had to stop and consider what my coauthor would do with a scene or where he might deviate from the story I had in mind.

Fortunately, we had worked out most of the details in advance and thought a lot alike so it wasn’t that much of a problem.

To both, what did you love about it?

Ross:   Getting a chance to work with Walter was amazing. I learned so much about writing! For me, the creative process is the most interesting part. I just love to write.

Walter: The chance to see another writer at work was wonderful. It was sort of like playing a team sport. The joy of winning as a team is very special.

Finally to both, what did you learn from the experience?

Ross:   I learned so much that I can’t list everything here. One interesting thing was that I saw my writing change as I got older. Now that I’m seventeen, I think (and hope) I write differently from the way I did at thirteen. If I wrote the book now, it would be quite different just because I am older and I’ve changed.

Walter: First, I learned that my faith in a young writer was justified. We came to a point at which I was sure that Ross could have finished the book alone. I’m glad he didn’t, of course.

I also saw, first hand, that the experience of writing increases the ability to write. Ross wrote much more convincingly at the end of this project than he did at the onset. I believe that structure helps in the writing process and working with Ross on Kick served to reaffirm this in my mind.

Ross, many teens read Cynsations, and many of them are writers themselves. What advice do you have for them?

You have to be willing to work really hard if you are serious about your writing. Once the more creative part is done, and it’s all just the hard work of revision, you need to put in the time and stick to it. Don’t give up.

Leave a Reply to Wild About Words Cancel reply