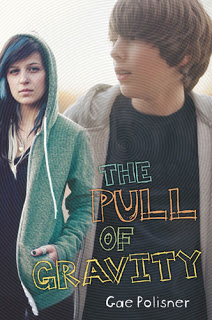 Gae Polisner is the first-time author of The Pull of Gravity (Frances Foster/FSG, 2011). From the promotional copy:

While Nick Gardner’s family is falling apart, his best friend, Scooter, is dying from a freak disease.

The Scoot’s final wish is that Nick and their quirky classmate, Jaycee Amato, deliver a prized first-edition copy of Of Mice and Men to the Scoot’s father.

There’s just one problem: the Scoot’s father walked out years ago and hasn’t been heard from since. So, guided by Steinbeck’s life lessons, and with only the vaguest of plans, Nick and Jaycee set off to find him.

Characters you’ll want to become friends with and a narrative voice that sparkles with wit make this a truly original coming-of-age story.

From the time I could read chapter books (probably by the age of six) well into my young adulthood (before the busy constraints of “real life” took over), I was a voracious reader, one of those kids that came home from school every day and devoured an entire novel, unable to sleep or put it down until the very last page was turned.

The first novel I remember not being able to put down was Don’t Take Teddy by Babbis Friis Baastaad (Scribner, 1967). The book had won the 1969 Mildred L. Batchelder award and was about a boy and his brother, Teddy, in the Norwegian countryside. The book opens with the boys playing baseball. Teddy is mentally challenged and wants to play but the other boys kind of taunt him. He picks up a baseball and chucks it, not realizing it’s not a ball but a rock, and accidentally injures one of the other players. Teddy’s brother is petrified that the authorities will take Teddy away, so he grabs him and they run off together, fending for themselves in the harsh, rustic countryside. Poignant and terrifying moments ensue, at least if you are an eight-year-old girl.

I have very few moments of clear memory from my childhood before the age of 9 or 10, but I distinctly remember sitting on the couch in the living room of my first house (which means I couldn’t have been older than 8), frantically turning pages to see if Teddy would be okay before we had to leave and go somewhere. My sister sat breathless at my side waiting for me to finish because she had read it and wanted to discuss it with me.

Indeed, there’s an entire section of The Pull of Gravity that is a complete homage to that book. If you email me, I’ll tell you which one, but talk about a book sticking with you!

As preteen and young adult, I basically read every book I could get my hands on – from E.L. Konigsburg (From The Mixed-Up Files of Mrs. Basil E. Frankweiler or Jennifer, Hecate, Macbeth, William McKinley, and Me, Elizabeth (both Atheneum, 1967), and the latter of which my mother read aloud to me when I was home, sick as a dog from school and, oh my gosh, I can remember awakening every few hours from a sweaty, feverish sleep to request another chapter) and Mary Rodgers (Freaky Friday and Freaky Monday (both HarperCollins)) to Paul Zindel (The Pigman (Harper, 1968); “The Effect of Gamma Rays on Man-In-The-Moon Marigolds” (1964); My Darling, My Hamburger (Harper, 1969)) and S.E. Hinton (The Outsiders (Viking, 1967) and That Was Then, This is Now (Viking, 1971)) and, talk about books that defined what you knew of adolescence, the incomparable Judy Blume (Are You There God? It’s Me, Margaret (Yearling, 1970); Forever (Bradbury, 1975); Deenie (Bradbury, 1973)).

Although I ventured occasionally into other genres (the astoundingly good Time Trilogy by Madeline L’Engle (FSG, 1962-1986)(OMG, my publisher!)), character-driven, realistic, contemporary YA was always the genre that called to me, and, alas, this hasn’t changed.

As such, when I set out to write a young adult book, this is really what I striven for: a contemporary (but classic) story driven by its characters–in my case, Nick, The Scoot and Jaycee.

I am definitely a reader who wants character over story, which is to say, to me, the characters are the story. If I care enough about the characters, I want – no, need – to know what will happen to them, and I hope in this regard, I’ve succeeded with The Pull of Gravity, while taking the reader on a page-turning journey as well. 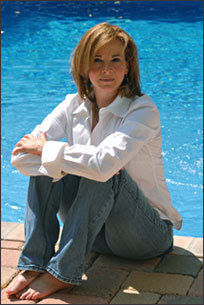 This is a great question, and I don’t have all the answers, given the rapidly-changing nature of technology. It is certainly a question that concerns me given that I write contemporary realistic fiction (both women’s and young adult).

Technology is a pervasive aspect of our culture and, in my humble opinion, you cannot get away with writing contemporary fiction without taking technology into consideration.

Especially if you are a young adult, every day of your life involves exposure to, and use of, technology, from email to facebook and Twitter, to the internet and Google searches (etc.), not to mention the ubiquitous iPods and cell phones and texting.

Starting from (iii) – accounting for the existence of technology — and moving backwards, for example, it used to be that when kids ran off by themselves in a story, there was no way to communicate with them or expect that a parent could find them. Of course, the kids could find a payphone, but that ability to contact went in only one direction.

Now, with the existence of cell phones, it’s not only the case that the parents could contact the kids, but that it is expected that the kids will check in with the parents by cell. And, of course, there is the issue of a cell phone running out of charge.

I have heard of several writers deciding to have their protagonists forget their phone, or lose it somewhere, or have it quickly run out of charge, but I think sooner or later, these ploys are bound to get old. Kids have cell phones. Most of them take them everywhere (and, yes, my 15-yr-old son hates his cell phone, never remembers to charge it, constantly loses it, and doesn’t take it anywhere, but that’s only because we refuse to buy him an iPhone [see, e.g. losing it]).

As for (ii) – having the voice or slang of the technology down – in The Pull of Gravity, Nick and Jaycee, and especially Nick and his brother, text to one another throughout the story. It felt important to properly reflect the way a kid would text these days with all the inherent abbreviations and “initialisms” (e.g. LOL, OMG, or shortening text to phrases such as “b4” or “c u soon”) while also making sure it didn’t make the read confusing to a kid not so keen on such forms of communications or make the manuscript feel so specifically of-a-time that it would soon outdate it, or worse, feel forced, and take away from its impact. I found this particular issue very challenging and thought-provoking when writing and revising The Pull of Gravity.

Finally, with regard to (i) knowing how the different technology is used, again tricky given the ever-evolving nature of such things. For example, when I first wrote The Pull of Gravity, flip phones and the likes were huge and Nick was constantly “flipping open” his cell phone.

By the time I got my book deal and my first pass pages were being prepared, more and more kids had iPhones and the likes which meant less and less “flipping open.” I went through and took the references to how the phone was used out as much as possible. In another scene, I have the kids using a GPS, when, by the time, the book gains steam, most kids will have a GPS-function on their phones and not need a separate device (sigh).

Notwithstanding the crazy-rapid changing nature of technology and the impossibility to, therefore, always be completely up-to-date, I think it is essential, if you write contemporary realistic fiction, to include it in your story. It is a ubiquitous influence on our culture and leaving it out would date a manuscript even more.

2 Replies to “New Voice: Gae Polisner on The Pull of Gravity”