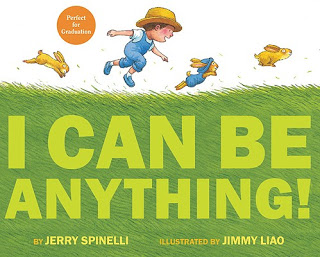 From Random House: “Jerry Spinelli is the author of more than a dozen books for young readers, including Maniac Magee (Little Brown, 1990), winner of the Newbery Medal; Wringer, a Newbery Honor Book; and Stargirl (Knopf, 2000) a New York Times bestseller and an ALA Top Ten Best Book for Young Adults.”

Could you briefly update us on your back list, highlighting as you see fit?

Today I Will: A Year of Quotes, Notes, and Promises to Myself (Knopf, 2009) is the first title co-authored by my wife, Eileen Spinelli, and me.

It’s nonfiction, a kind of literary daily devotional. One page per calendar date. Each page begins with a quote from a children’s book, followed by commentary and resolution: “Today I will…”

Congratulations on the release of I Can Be Anything, illustrated by Jimmy Liao (Little Brown, 2010)! What was your initial inspiration for the book?

At the time it was actually a lament for the lost, original multi-taskers we are as kids–milkweed-blowers, railroad car-counters, mixing bowl lickers–“occupations” we pursue with all the focus and passion of any CEO.

Then we grow up, specialize narrowly into accountants and plumbers and clerks.

Something sad about that.

Eileen writes and sends poems to folks on holidays. A couple of times editors have suggested turning a poem into a picture book. With that in mind, she encouraged me to show the poem around. It was with one publisher for several years, then landed with Alvina Ling at Little, Brown. She re-cast it somewhat, essentially changing it from a wistful remembrance to a celebration. And then added the wonderful illustrator Jimmy Liao.

What did Jimmy’s art bring to your text?

Jimmy’s art gives it life. Jimmy’s art abducts the eye and carries it along with his vision of the words. His art is the words celebrated.

Would you please tell us about the Stargirl Societies?

We first heard of a group calling themselves the Stargirl Society from a teacher in Kent, Ohio–Kathy Frazier. Intrigued, we went to Kent to see for ourselves. We found middle and high school students using my novel Stargirl (Knopf, 2000) as their guide.

They met and did Stargirl-like things: dropping loose change on sidewalks, slipping anonymous compliments into fellow students’ lockers, etc. Local women of accomplishment came to speak to them. Their sub-groups were called “constellations.” At year’s end they held an Inner Beauty Pageant.

Since then similar Stargirl Societies have multiplied around the country and the world.

Could you tell us about your writing life? What is your typical writing day like?

Before 1989, I wrote, as one author has put it, “in the cracks.” I had a 9-to-5 job, so I did my writing on my lunch hours, after dinner, on weekends–when I wasn’t helping Eileen deal with our six kids. If I waited for the right time–when the kids were grown (ha! they’ve been succeeded by 19 grandkids), when time was plentiful, when…when–I’d still be waiting.

I used to write on the dining room table, the bed, wherever. Now I climb the stairs after breakfast and go to “work” in my office, in what in another house might be a guest room. (Even with the kids gone, we always inhabit a house with at least three bedrooms, so two can become our offices.)

My main writing time is in the morning. Afternoons are for errands. Evenings, I may or may not write.

I begin each morning by reading aloud to myself the previous day’s work. Hearing it can help problems stand out. When I finish a chapter, Eileen reads it. I’ll either rework it or move on according to her assessment. She is, in effect, my first editor.

Your first book was published in 1982. How has children’s-YA book publishing changed since that time? 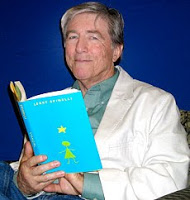 I’m a poor historian of my own field. Unlike some of my fellow storytellers, I’m not much into the business and teaching aspects of what I do.

In the beginning I was so naive that when I saw a review listing my first published book, Space Station Seventh Grade (Little, Brown, 1982) as “YA,” I called my editor and asked her what it meant–and what was meant by the little black star that came with the review.

I do recall that after having several titles published, my proposal for another was turned down because, I was told, my YA well had run dry. This was shortly before Maniac Magee won the Newbery Medal.

I might add that, frankly, I’ve never really been sure what exactly YA means, what are its parameters. I’m often asked, “What age group do you write for?” I don’t write for any “age group.” I understand that publishers and booksellers must pay attention to such things, but I take my cue not so much from a projected readership as from the story itself.

When a story idea visits me, I, so to speak, take it out to lunch. I talk to it. Ask it questions. “What do you mean?” “Where did you come from?” “What’s the best way to tell you?”

The answers to those questions are what guide me.

How have you changed as an author? As a writer?

Space Station Seventh Grade (1982) was my first published book–and the fifth that I had written. The first four provoked enough rejection slips to paper our house. In those days, I think I tried to be perfect. I remember once taking a month to craft a single metaphor.

Somewhere along the line I must have discovered that writing isn’t mathematics. It’s not marching, it’s dancing. The faster I wrote the better I got.

You received a Newbery Award for Maniac Magee (Little, Brown, 1990) and a Newbery Honor for Wringer (HarperTeen, 1997). Could you share any memories of those experiences?

The Maniac Magee call woke us up in the middle of the night. We didn’t get back to bed till 6 a.m., and then only for a half-hour. The phone rang constantly. The living room smelled like a funeral parlor from all the flowers. No TV for me, as the Gulf War had just begun and was monopolizing the morning shows.

The South African government ordered and distributed copies in their efforts to transition away from apartheid.

Individual readers and organizations launched runs and other projects in support of the homeless.

A letter told me of a classroom in Georgia voting to forgo lunch so the teacher could continue reading the book aloud to them.

What does having received such a high level of recognition mean to you now?

Sometimes you put on a writing-teacher hat. Could you tell us more about that?

I didn’t have the sense to attend writers conferences when I was struggling to get published.

These days I often find myself on the faculty of the week-long summer Highlights Foundation Writers Workshop at Chautauqua in Chautauqua, NY. It’s the best one I know.

The faculty, editors and authors, even sit and eat all meals with conferees, not each other. Aspiring writers get more than information; they get a hug and a rejuvenated spirit.

Uh-oh. As I said, I’m primarily a storyteller–and grandfather and berry picker and train rider–but not much of a reader, at least not of “children’s books,” except for those of my favorite writer, Eileen Spinelli.

I guess for my recreational reading, I find the need to get out of my own arena, to play in another sandbox. So, sorry on that one.

(And if you want to know my favorite book of Eileen’s, it’s her masterpiece When You Are Happy, illustrated Geraldo Valerio (Simon & Schuster, 2006).)

Hokey Pokey, a novel depicting childhood as more of a place than a time, in which Childhood itself might be said to be the main character. Knopf/Random House will publish it in 2012.

Jake and Lily, a novel about brother-sister twins born on the California Zephyr as it sped through the Moffat Tunnel in Colorado, to be published by HarperCollins in 2012.