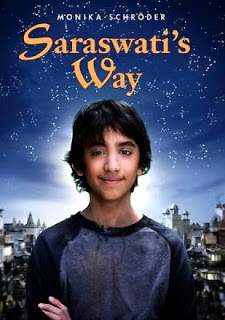 “Wanting is just another kind of hunger…”
– Saraswati’s Way

Saraswati’s Way (Frances Foster/FSG, 2010) is a middle grade novel about a 12-year old Indian boy, Akash, with a gift for math, who runs away from his home in rural India to find a better life. He prays for the help of the Hindu goddess of knowledge, Saraswati, and Ganesh, the remover of obstacles. Akash ends up in the New Delhi train station, where he joins a gang of street kids.

What made me write a book about an Indian street child? By the time I started Saraswati’s Way I had already lived in New Delhi for six years, and often, when arriving at or leaving from the New Delhi train station, I had seen street kids, barefoot and dressed in shabby clothes, scavenging for food.

I wondered what would cause a child to run away from home and end up living in the train station. I contacted a charitable organization that works with these children and listened to some of their horrific stories.

By creating Akash, I wanted to explore how a young Indian boy can find the strength to overcome such circumstances in pursuit of something he desperately wants.

Writing about a boy of Hindu faith was the biggest challenge while working on Saraswati’s Way. Since my arrival in India, I had read a lot about Hinduism. 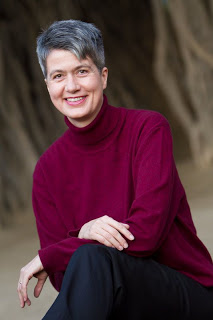 Though I never became fluent, I had also taken Hindi classes for four years. My Hindi teacher, whom the book is dedicated to, taught me a lot about religious customs and festivals. I frequently asked her and other Indian friends if my depictions of particular events or religious rituals were correct.

One of the most challenging scenes to write was the funeral for Akash’s father. During the Hindu funeral ritual, the oldest son cracks open the skull of the deceased while the corpse burns on the pyre. Having never attended a Hindu funeral, I relied on the descriptions given by Indian friends and colleagues. I remain thankful for their trust in sharing their own memories about such an intimate subject.

“Wanting is just another kind of hunger, burning until satisfied.”

I chose to begin the book trailer for Saraswati’s Way (below) with this quote from the book as it encapsulates a main theme of the story.

Even though Saraswati’s Way is set in a place foreign to most readers in the U.S., I hope a story about persistence and patience in the service of one’s dreams will resonate with readers everywhere.