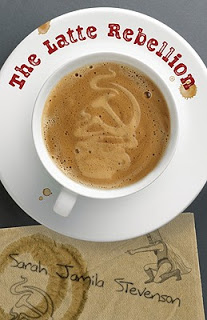 Sarah Jamila Stevenson is the first-time author of The Latte Rebellion (Flux, 2011)(author blog). From the promotional copy:

Our philosophy is simple: Promote a latte-colored world! —from the Latte Rebellion Manifesto

When high school senior Asha Jamison gets called a “towel head” at a pool party, the racist insult gives Asha and her best friend Carey a great money-making idea for a post-graduation trip. They’ll sell T-shirts promoting the Latte Rebellion, a club that raises awareness of mixed-race students.

Seemingly overnight, their “cause” goes viral and the T-shirts become a nationwide fad.

As new chapters spring up from coast to coast, Asha realizes that her simple marketing plan has taken on a life of its own-and it’s starting to ruin hers. Asha’s once-stellar grades begin to slip, threatening her Ivy League dreams, and her friendship with Carey is hanging by a thread. And when the peaceful underground movement turns militant, Asha’s school launches a disciplinary hearing.

Facing expulsion, Asha must decide how much she’s willing to risk for something she truly believes in.

I guess I’m a combination of plotter and plunger. For me, a story idea could start anywhere. An evocative name or turn of phrase that somehow “sings,” a plot event, a character, a what-if scenario. And just as every story starts from its own unique spark, every project so far has taken shape a little differently for me.

The Latte Rebellion started with just that phrase popping into my head–“latte rebellion”–and that got me speculating pretty quickly. Soon after that, a character started taking shape—Asha, the narrator—and I was off and running.

Usually, a scene will start forming in my head from that seed of an idea, and if it’s the kind of scene that won’t leave me alone, I’ll start writing. At this point in the process, I take a lot of notes, and I might start a very informal outline.

As I start writing, the plot and character and other ideas start to flow in more quickly, so the notes end up getting a bit more detailed. There’s always a fairly long stretch during which I’m writing and outlining and plotting and note-taking all at the same time.

If that sounds messy…yep, it is. In order to organize my thoughts, I often end up drawing a sort of flow chart so I can visualize how the different subplots relate to one another and how they progress in time. My thought process is very visual, so it’s easier for me to keep track of everything that way rather than using a more linear plot outline.

In any case, I almost never have a full outline when I start. Often, I’m halfway through the book before I’ve figured out how it’s going to end. But I almost always get there—I just need to have faith that the story will become more fleshed out in my head the more I work on it, even if I’m not quite sure how I’m going to get from Point A to Point B. As I write, though, it becomes clearer to me where the story should naturally go, how the characters would act and react.

Of course, sometimes I do get stuck, and in that case, it’s great to have my writing group to bounce ideas off of and help me figure things out. I have an amazing writing critique group!

That’s one major piece of advice that I’d offer beginning writers struggling with plot—getting a second (or third, or fourth) opinion on how your story’s progressing can be invaluable, especially if those “beta readers” do a lot of reading and writing themselves and can articulate what isn’t working. They may be able to help you brainstorm solutions, too.

Also, don’t be afraid to take a break from the project, if you’re completely stuck. Sometimes you just need a little time away to let your ideas percolate.

Read a lot, and think about what works or didn’t work in the plot of those books. Think about what kinds of stories you like to read (or watch), and see if you can incorporate elements of those stories into your own book. If you like suspense, for example, try injecting an element of suspense into your project. Do some experimental writing—ask yourself “what if” and see where it takes you. You might not ultimately use the resulting writing, but the process might usher you in a new creative direction.

The creative brain works in mysterious ways. I am still not entirely sure how I get from that tiny starting idea to a full novel, but it’s like pieces of a puzzle slowly falling into place and creating a complete picture. I slide a piece in here, a piece in there, and suddenly I start seeing where the rest of the puzzle pieces are supposed to go. 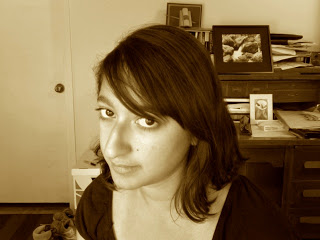 In The Latte Rebellion, I tried to deal with this by making the references to technology as general as I could. It was a challenge, because there are events in the story that depend on technology, specifically the Internet. And some of that technology changed in just the couple of years I was working on the book!

I realized that in order to retain a sense of authenticity, I’d have to update some details. Internet printing services became a lot more widespread, for instance—so I had to cut an entire scene that I really liked in which Asha and her artist cousin spend a marathon evening screenprinting T-shirts. It was something that my editors at Flux pointed out to me early on in the revision process, and though I was sorry to cut the scene, it ultimately made the story feel a lot more contemporary, and it fit in much better with the rest of the plot, too.

Ultimately, though—just to be realistic about it—most books are going to become dated at some point. All I can do is try my best to stick with themes and characters that have staying power, write my stories as well as I can, and try to avoid anything that will date the story too rapidly.

And in the end, I guess I’ll just have to keep writing more books to replace the dated ones. And, what do you know, I was planning on doing that anyway.

Check out the book reader guide for The Latte Rebellion.