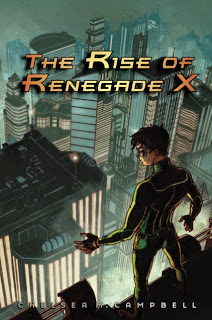 Chelsea M. Campbell is the first time author of The Rise of Renegade X (Egmont, 2010). From the promotional copy:

Damien Locke knows his destiny–attending the university for supervillains and becoming Golden City’s next professional evil genius. But when Damien discovers he’s the product of his supervillain mother’s one-night stand with–of all people–a superhero, his best-laid plans are ruined as he’s forced to live with his superhero family.

Going to extreme lengths (and heights), The Rise of Renegade X chronicles one boy’s struggles with the villainous and heroic pitfalls of growing up.

Writing the Breakout Novel, however, is awesome. It’s about challenging yourself to improve your writing and take it to the next level. It doesn’t tell you how to write, but instead asks you questions to help you improve your story, like, “What’s the worst thing that could happen to your main character? When would be the worst time for that to happen?” Things like that.

It’s all about sharpening the conflict in your novel and upping the stakes, both physically and emotionally, and it’s hard not to get excited about working on a story while reading this book.

Another thing I love about it is that it’s useful at any level. A lot of writing books are only focused on beginners, and there’s not a lot aimed at the intermediate writer who knows the basics but can’t quite get over the last couple hurdles keeping them from getting published.

Writing the Breakout Novel is great for anyone who wants to improve their storytelling, whether they’ve got a few novels under their belt but “aren’t quite there yet” or have been published for years.

I know the quality of my books jumped up quite a bit after I read this and went through all the exercises in the workbook, and the info I’ve gotten from it has been invaluable.

Comedy is tough. There’s nothing worse than someone who thinks they’re funny when they’re really not. I think we’ve all had at least one class with “that guy” who thinks he’s hilarious, but everyone in the room is silently willing him to shut the hell up. Obviously, you don’t want to be that guy. But the fact that you’re even thinking about not wanting to be that guy probably means you aren’t.

I think an important element of writing comedy is to write what makes you laugh. You’ve got to do it for yourself, because if the humor isn’t honest, that’ll come through and it won’t be funny. Plus, if it makes you laugh, it’s likely to resonate with other people, too.

I tend to write humorous stories, mostly because that’s what comes out and because I enjoy making myself laugh, and The Rise of Renegade X is no exception.

Damien, the protagonist, has a pretty snarky inner commentary running through the whole novel. He says a lot of things I might think to myself but would never actually say.

When I was writing him, I’d just sit down and show what was going on through his eyes, getting his opinions of everything in there, which were usually pretty funny.

Other than funny plot elements, like a supervillain kid having to live with his superhero father, I didn’t pre-plan the jokes, I just wrote them as I experienced the story through the character’s point of view.

I think it’s difficult, but important, to trust yourself. You have to trust that when you sit down to write, something funny is going to come out. Sometimes I don’t realize what I’ve written is funny until I read it over the next day, so don’t toss anything you think is boring until some time has passed or someone else has looked over it for you.

Use humor as a tool to show a character’s personality–like everything in writing, it should move the story forward and enrich the audience’s experience with and knowledge of the characters.

As you write, put in all the jokes you can make work, and worry about weeding out the not-that-great ones that nobody gets but you later on.

Mostly, trust yourself, relax, and have fun. 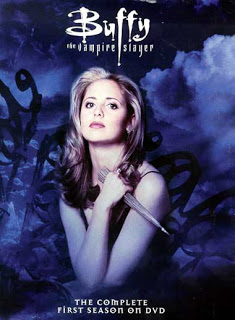 I have a confession to make: I actually didn’t start watching “Buffy” until sixth season. I couldn’t imagine that a show based on that movie could be any good, and it didn’t help that anyone I knew who watched it acted ashamed and called it a “guilty pleasure.”

But now I know better, and no one should ever feel ashamed to watch something as awesome as “Buffy.” I have since then seen way more episodes and become a big “Buffy” fan. It’s fun, and it’s got a girl with superpowers who kicks serious ass while dealing with the same problems as everyone else.

One of the other things I love about it is that Buffy can’t do it alone, and even the shy nerdy girl is super useful and eventually finds her strength (I was so that girl).

Even though I tend to write about guys, every time I sit down to write a new book, my mind turns to “Buffy.” How can I make something that awesome? How can I have characters that kick ass and who have the ability to be both serious and funny at the same time? How can I create relationships that complex?

Whenever I think about blending real life and fantasy elements in my novels, my go-to inspiration is “Buffy.” Is it a coincidence that I love writing about teens who live in a world that’s part reality, part magic? I always wanted to write fantasy, but it took me a long time to realize I wanted to write about it in the real world, and that the characters I really loved writing about were teens.

It’s a pretty safe bet to say that that seed started with “Buffy,” and I don’t know where I’d be without it. It changed how I thought about fantasy and about YA.

If you’ve never seen the show, I highly recommend it. You may start out snickering at all the 90s-isms, but don’t wig too much–it won’t take long for you to get hooked.