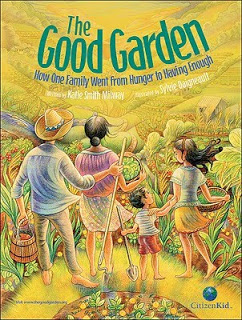 It’s been great to see my new book, The Good Garden: How One Family Went From Hunger to Having Enough, illustrated by Sylvie Daigneault (Kids Can, 2010), begin to inspire students and their families to think about how they can help the world achieve food security, starting with a national food drive they can join at www.thegoodgarden.org.

But a question I’m starting to be asked a lot is what inspired me? Why did I chose to write about a Honduran campesino girl named Maria Luz and her family, the Duartes, whose lives and livelihood – farming the land – were transformed by ideas from a simple village school teacher?

Well, here’s the back story:

Inadvertently, the book is the fruit of about 18 years of thought and labor! I researched the life of the teacher—his real name is Don Elías Sanchez—in 1992 just after the Earth Summit, for a biography-based story of healthy community development: The Human Farm: A Tale of Changing Lives & Changing Lands (Kumarian Press, 1994).

Then, in 2005, just as I was finishing up the manuscript for my last kid’s book, One Hen: How One Small Loan Made a Difference, illustrated by Eugenie Fernandes (Kids Can, 2008), The Human Farm came out in a Spanish edition, which I was ask to review.

As I reread paragraphs on Don Elías’ early life—when he was a rural school teacher and taught farm kids through building school gardens—something just clicked! I saw the setting for a great children’s story to communicate lessons of food security and how kids can play a role in addressing global hunger.

You see, in the summer of 1992, I spent time in Honduras living and working on Don Elías’ training farm alongside campesinos, and visiting former trainees – men and women – on their farms to see the fruits of their learning.

Elías was the Johnny Appleseed of sustainable farming in his country – a short, feisty, former campesino-turned teacher who had helped about 30,000 farming families —rural and urban—to food security. The starting point was always to plant a seed in campesino’s heads: the ideas that they could solve a lot of their problems using their innate resources: their heads, hands and hearts. They could make compost from garbage, work hard and shape the land into terraces that rains would not erode. Plant flowers that repelled insects.

I heard from campesinos, again, and again, that as they learned to nurture their land, and saw the results, they became more interested in nurturing their families and their communities – sending their kids to school, getting them vaccinated, investing in running water and sanitation and so forth. 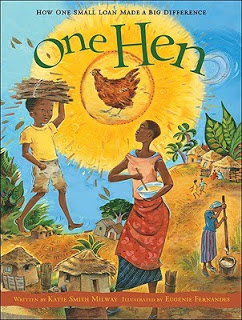 There was a spiritual aspect, too – as farmers got into sync with Creation many grew reconnected to their faith community. Alleviating hunger and thirst is really a first step in alleviating poverty of the body and soul. It’s hard to strive for education, entrepreneurship or enlightenment if your belly is empty.

Don Elías had a credo: “ideas unshared have no value!” It’s a principle that one can apply to all of work and life.

Elías passed away in 2000, but I had the chance to revisit his training farm in Honduras in 2005 and spend time with his former partner, Candida, his protégé, Milton Flores, and several other characters from The Human Farm.

Incredibly, Elias’s terraces had held in the teeth of Hurricane Mitch – which wracked Honduras in 1998. Once again, I walked those original big, earthen steps.

This summer, we made a short documentary of one of the campesino families I profiled 18 years ago – the Vasquez family, a heartwarming father/daughter story of reviving poor land, as portrayed by the Duarte family in The Good Garden.

The real María Luz has grown up and become an important community development worker in her province, connecting farmers to fair credit. It was such a privilege to be able to tell “the rest of the story” in the film – and to underscore the “girl effect:” When you invest in girls in developing countries, you really do invest in a family and community.

3 Replies to “Guest Post: Katie Smith Milway on The Good Garden: How One Family Went From Hunger to Having Enough”