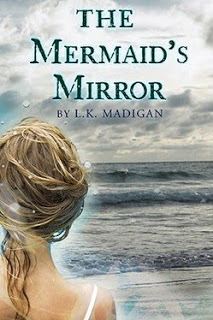 L.K. Madigan’s Feast of Awesome Giveaway by Cindy Pon from the 2009 Debutantes. Peek: “How can we best express our love and support for Lisa during this time? Through the celebration of her books. only a fellow writer can know the angst and turmoil associated with creating stories–because we put so much of ourselves in them. Won’t you help us in spreading L.K. Madigan Book Love?”

ALA Youth Media Awards: Which Publishers Are Celebrating? by Elizabeth Bluemle from Publishers Weekly. Peek: “I’ll start with a summary, and then post the full list below….”

The Agent’s Role in Today’s Digital Book World by Mary Kole, Literary Agent, Andrea Brown Literary Agency from Digital Book World. Peek: “as publishers embrace different content delivery systems and processes, agents will take on more packaging responsibilities: editorial work, marketing consultation, design, etc. Whether we’re presenting a book to editors or an app proposal to a digital publisher, we will have had a more active hand in its reaching ‘market ready’ status.”

How to Create a Podcast: Ready to Step Out of Your Blogging Comfort Zone? by Joanna Penn from The Creative Pen. Peek: “You can use BlogTalkRadio or other free hosted solutions but I don’t think the quality is very good and iTunes is a great stand-alone market so it’s worth having your own feed.”

What’s Going on With Borders? by Carolyn Kellogg from Jacket Copy from the L.A. Times. Peek: “Barnes & Noble, if buffeted by Amazon’s success, has remained afloat; Borders has been taking on water.” Note: a clear, succinct update on the status of the Borders chain. 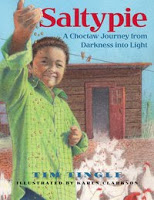 Native authored-books on the 2011 Notable Children’s Books list by Debbie Reese from American Indians in Children’s Literature. Special congrats to fellow Texas author Tim Tingle on the recognition for Saltypie: A Choctaw Journey from Darkness to Light (Cinco Puntos, 2010).

Should I Mention My Blog in My Query? by Carolyn Kaufman from QueryTracker.net. Peek: “…if you have a huge blog on, say, mountain climbing, but your book has nothing to do with mountain climbing, you don’t have the built-in audience an agent or editor is looking for, and mentioning your blog will look like a non sequitur.”

Authors on the Internet: Facing Up To Facebook by Tami Lewis Brown from Through the Tollbooth. Peek: “This week in the Tollbooth we’ll look at Facebook and authors. We’ll see who’s doing what, check out some innovative sites for readers and writers, and look out for pitfalls.”

Celebrating Rejection by Danyelle from QueryTracker.net. Peek: “…why celebrate something that can be so painful? Something that we sometimes even come to believe for a time? Because rejection is proof that you’re not just existing–you’re living.”

SCBWI Team Blog Pre-Conference Interview: Jennifer Besser, Publisher of G.P. Putnam’s Sons, an imprint of the Penguin Young Readers Group, by Lee Wind from I’m Here. I’m Queer. What the Hell Do I Read? Peek: “Having an agent is very important, and has been for some time now. Of the deals I made in 2010, at least 95% of them were agented, and most years it’s 100%.”

Hardiness by Kristi Holl from Writer’s First Aid: A Medicine Chest of Hope. Peek: “I know for a fact that when I focus on the finish line–the day I can say the book is done–that it feels overwhelming.”

David Lubar’s Travel Challenge: “I have nine school visits scheduled during January, February, and March. I also have a frightening ability to attract terrible weather. (Some schools in rural areas book me in the spring because they need the rain.)” Root for David, and/or commit to donate (be it 10 cents or a dollar) to the charity of your choice each time he foils his bad travel karma! Go, David!

A Video Conversation with Rita Williams-Garcia by Uma Krishaswami from Writing with a Broken Tusk. Rita talks about the origins of One Crazy Summer (HarperCollins, 2010). See also the 2011 National African American Read-In from Kyra at Black Threads in Kidlit.

A Crisis of Self-Confidence by Mary Kole from Kidlit.com. Peek: “Sometimes frustration is a good thing — it spurns you on when you might otherwise quit — but I find that the specific frustration of not being published yet has one common cure: stop submitting and start nursing the writing.”

Writing a Young Narrator by Erik Raschke from Crowe’s Nest. Peek: “I really focused on the framework in which teens communicated with one another and less on what was actually being said. Once I had written the situation, i.e. boys getting ready to fight, boys talking about sexy movie stars, I could cut out the modern language and replace it with how I used to speak when I was a budding teen (which was roughly the same time The Book of Samuel (St. Martin’s, 2009) takes place).”

Congratulations to Jenny Moss on the release of Taking Off (Walker, 2010)! From the promotional copy: “Annie Porter, a high school senior who wants to be a poet and is caught up in a romantic triangle, meets Christa McAuliffe before the space shuttle Challenger accident.” School Library Journal says, “The novel paints a lovely portrait of a smart, strong, friendly McAuliffe. In fact, the author’s background as a NASA engineer makes all of the scenes based at Johnson or Kennedy Space Center grounded and intriguing. Moss’s descriptive language is almost poetic.” Purchase from the author’s home indie, Blue Willow Bookshop.

Taming Time: Practical Tips to Increase Writing Productivity by Sarah Sundin from Novel Journey. Peek: “‘I am a professional. I am a professional.’ Repeat this until you believe it. Now, act like it. Keep office hours. Even if you only have one hour a day to write, use it well.”

2011 Spotlight Authors and Illustrators from 28 Days Later: A Black History Month Celebration of Children’s Literature. Peek: “To celebrate children’s authors and illustrators of color, during the twenty-eight days of Black History Month we’ll profile a different artist. Vanguard artists are those who have paved the way for newer authors and illustrators, all others are considered ‘under the radar.'” Tune into The Brown Bookshelf: United in Story every day in February to learn more about voices and visions from the African-American children’s-YA book community. Highest recommendation. 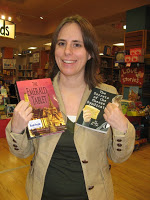 From Madeline at CBAY: Until Jan. 31, “we will accept unsolicited manuscript submissions for only fantasy and science fiction picture books. These will be for traditional 32-page picture books for ages 2-5.

“…the picture book must either be a fantasy (fairy tales, dragons, fairies, etc.) or a sciene-fiction (time travel, space, under the ocean, steampunk, etc.) tale. We will not consider any other type of picture book. However, we will look at number or alphabet books with a fantasy or science fiction theme. Finally, we will not consider manuscripts written for older children at this time. This is a call for fantasy and science fiction picture books, exclusively.” See more information.

A video interview with Janet Fox about Faithful (Speak, 2010) by Kathi Appelt:

Congratulations to fellow Austinite and YA author Ruth Pennebaker on the release of her first adult novel, Women on the Verge of Nervous Breakthrough (Berkley Trade, 2011).

Blessed will be released on Tuesday, and so this post is bursting with countdown interviews, guest posts, upcoming events, and giveaways! Thank you so much to the bloggers and event planners! I’m honored by your interest, enthusiasm, and efforts. Most appreciated!

I’m also still on deadline for book four in the Tantalize series, which will continue to feature characters from the previous books but is more of a sequel to events in Eternal.

However, I did manage to peek out of the house for a couple of writing community events this week! So, here’s my full report!

Tantalize was named a Top Ten pick on the Young Adult Library Services Association (YALSA) list of 2011 Popular Paperbacks for Young Adults in the “What’s Cooking?” category (“tasty reads to fill your belly and warm your soul.”).

Previous honors for Tantalize include:

Mundie Moms says of Eternal: “…it’s a story about deception, redemption, love, danger, and hope. It’s a story that both fans of Dracula and paranormal characters will enjoy reading.” Read the whole review. 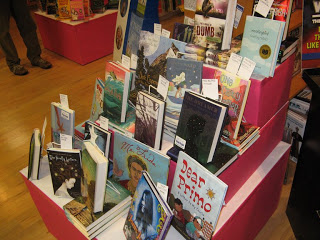 This week, BookPeople in Austin is celebrating the ALA award winners. 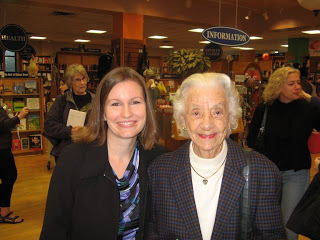 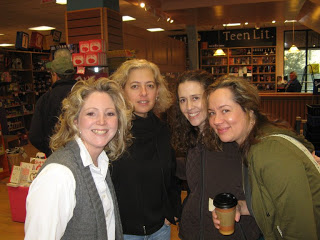 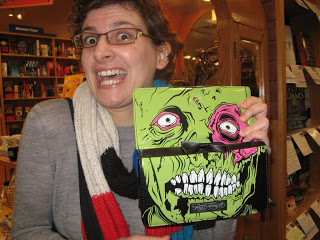 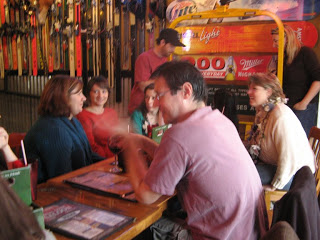 Afterward, about 20 of us ended up next door at the Shoal Creek Saloon. Here’s Greg, next to newcomer Sara Pennypacker, across from Bethany Hegedus, Sara Kocek (the newest face at the Writers’ League of Texas), and Margo Rabb.

Link of the Week: check out Libba Bray’s latest cover from Professor Nana. 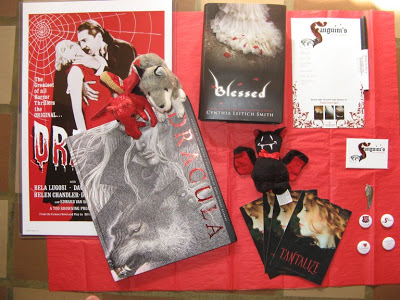 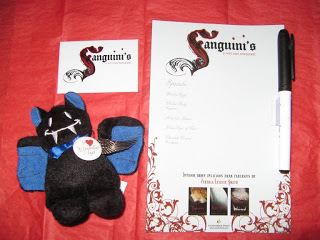 Blessed Blog Tour & ARC/Prize Package Giveaways by Kari from The Teen {Book} Scene (enter at the links below for more chances to win–multiple prizes available!):

Blessed Online Countdown Event by Valorie from Truth Be Told. Valorie will be posting reviews, book trailers, teaser excerpts, and fun author-and-character interviews. She’s giving away two bookplate-autographed copies of Blessed, each with a Magnetic Sanguini’s menu wipe board and pen (see photo above). She’s also giving away one board to (a) a random commenter and another to (b) “a person who helps promote the release of the book, randomly chosen based on tweets, adding it to goodreads, and blogging. It will go to someone who didn’t win the hardcover.” Giveaway deadline: 11 p.m. PST Jan. 24. See details.

Embracing My Spooky Side: a guest post by Cynthia Leitich Smith. Peek: “I had no interest in violent, slasher flicks, though I enjoyed more atmospheric films (with plots) like “Poltergeist” (1982) and “The Witches of Eastwick” (1987). The latter-featuring Jack Nicholson as the devil-especially appealed to me because of its female-empowerment reversal at the end.”

Blessed In-Person Author Tour Schedule in Central Texas and the Northeastern U.S.: sponsored by Candlewick Press. Are you in Austin, New York, New Jersey, or the Philly area? Come join me along the way!

“From Classics to Contemporary:” a joint presentation offered by Cynthia Leitich Smith, author of the Tantalize series (inspired by Dracula by Bram Stoker (1897)) and Jennifer Ziegler, author of Sass & Serendipity (inspired by Sense and Sensibility by Jane Austen (1811)).

The authors will discuss how they were inspired by these classics, why Stoker and Austen’s themes are still relevant to teens/YAs today, the ongoing conversation of books over the generations, and much more.

Contact Dayton Bookings for more information and to schedule.