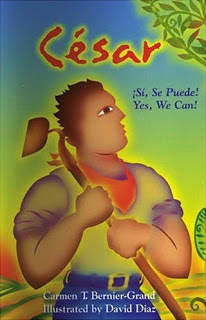 My editor at Marshall Cavendish asked me to write César: ¡Sí se puede! Yes, We Can! illustrated by David Diaz (2006) with a special voice.

The words started coming to me in the form of free verse. Strange, because I never considered myself a poet before that.

What inspired me to write in this form? Maybe my editor, maybe my I CAN READ Juan Bobo: Four Folktales from Puerto Rico, illustrated by Ernesto Ramos Nieves (HarperCollins, 1995), or maybe Marilyn Nelson’s Carver: A Life In Poems (Front Street, 1997). I don’t know.

As I said before, the form came to me as a gift, almost as if I were channeling. 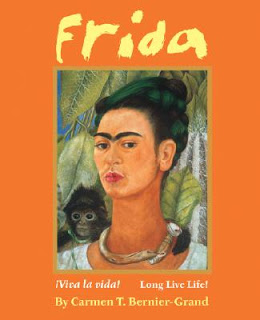 For years, I wrote just what came to my heart, in the form it wanted to be. I published an easy-to-read, a biography in prose, a novel in prose, and a collection of folklore from Puerto Rico.

Editors kept telling me that readers wouldn’t know me unless I wrote in a genre or specific form.

I, however, know well-known authors who, from the very beginning of their careers, wrote in different forms. Why couldn’t I do the same?

I want to write whatever my heart dictates. But right now my heart is enjoying having readers.

Believe me, having readers is the best award. 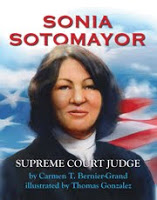 On August 8, 2009, Sonia Sotomayor became the U.S. Supreme Court’s first Hispanic justice and the third woman to serve the Court.

In elegant free verse, Carmen T. Bernier-Grand describes Sotomayor’s remarkable journey from her childhood in the projects near Yankee Stadium to her stellar academic achievements at Ivy League universities to her rapid rise in the legal profession.

When confirmed as a federal judge in the Southern District of New York, she said, “I feel I can touch the sky.”