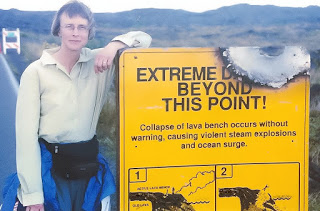 On one of my visits to Kilauea Volcano on the island of Hawaii, I drove down to the coast just before sunset. I started to walk across the lumpy, black lava fields toward the spot about two miles away where the volcano’s fresh torrents of lava were spilling into the sea and sending up a huge plume of steam.

Walking across a lava bed is crazy hard. Its rough surface is marked by deep cracks and razor sharp edges, and you tend to keep your eyes on the ground. But when I finally looked up, I saw an enormous orange ball shimmering behind the steam plume.

At first, I thought it was just the glow of lava reflecting off the plume, but it was the full moon providing spectacular backdrop to a volcanic eruption.

That evening the moon seemed like a powerful witness to this astonishing scene in the middle of the ocean. I didn’t doubt that it might have something interesting to say. The moon was the reason I wrote Volcano Wakes Up! illustrated by Steve Jenkins (Henry Holt, 2010), a story for children told in poems.

I need powerful momentum to propel me through the frustration that I know is coming on any given writing project. This manuscript took years to write, and I flailed around with several approaches. 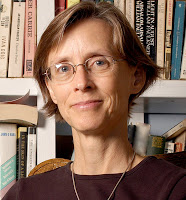 I had kept a journal on the several trips I made to the island. I took geology classes on an extended stay and wandered around Hawaii Volcanoes National Park so much, I could offer wisdom on the park’s attractions to confused tourists.

In a way, my explorations were essential, but they also made it harder. I almost knew too much about Kilauea. I had lost some of that writerly distance.

But time cures a lot. I ultimately decided to tell the story of a day in the life of an imaginary volcano with poems written from the points of view of several “characters” — the volcano, irrepressible ferns, carnivorous crickets, a small black road, and the sun and moon.

In my mind, the characters range from the young and impetuous to the old and wise. They interpret and reveal the volcano in different ways. 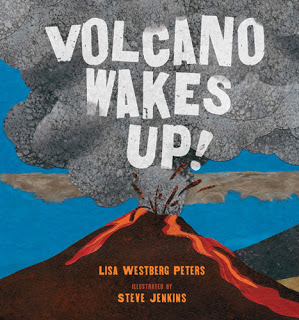 I love to write persona poems. They seem automatically fun. I especially like Paul B. Janeczko‘s anthology of persona poems, Dirty Laundry Pile, illustrated by Melissa Sweet (HarperCollins, 2001). Who can resist wanting to know what a washing machine and a vacuum cleaner have to say?

In Volcano Wakes Up!, two lava crickets chat about the prospects for dinner, a young volcano boasts about getting the most attention by throwing the nastiest tantrums, and a nervous road frets about that darned volcano’s red hot paving operation.

I’m a big fan of encouraging children (and their parents!) to see things from different points of view.

But lots of writers want that. I have to aim for something a little higher. I have to try to write a story that no one else can write, and that leads me back to the moon.

I hope the poems in Volcano Wakes Up! convey, at least a little bit, the connection I felt between an erupting volcano and its fascinating surroundings that night on Kilauea. 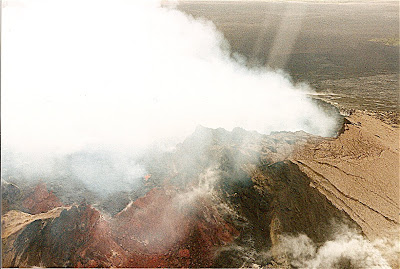