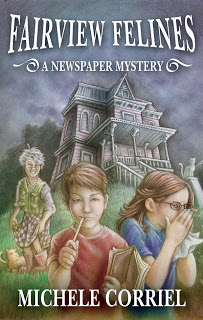 Michele Corriel is the first-time author of Fairview Felines: A Newspaper Mystery (Blooming Tree/Tire Swing, 2010). From the promotional copy:

All the cats in Fairview disappeared and only Thomas Weston, newspaperman extraordinaire (and eighth grader) can find them. All the while Thomas battles the never-ending hysterical headlines that pop up in his head!

I’ve always loved a good mystery. I can remember when I was in the fourth grade. I always kept a Nancy Drew book [by Carolyn Keene, 1930-] open inside my desk so when the teacher wasn’t looking I could sneak in a few more paragraphs.

There was something empowering about a young girl figuring out what happened – whether it was a stolen brooch or a missing staircase – and made me look at the world as a big puzzle I could handle rather than a big confusing mess that I couldn’t begin to think about.

In fact, I often imagined myself as a detective (and sometimes as a superhero, but that’s another book!), and when it was my turn to make up games on late summer evenings with other kids in the neighborhood, it almost always involved figuring out something or investigating something (and it usually involved places I wasn’t supposed to go).

Eventually, my love of writing and solving mysteries led me to a career in journalism and investigative reporting. I worked on newspapers in New York City and in Belgrade, Montana, and a few other places in between.

Fairview Felines: A Newspaper Mystery combines both my love of a good mystery and my passion for newspapers. My main character Thomas Weston thinks in headlines, and while I actually hate writing headlines, I love digging into a juicy story and getting a lead from a great source. 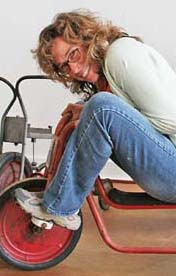 I love this story because it really shows everyone how important it is go to conferences and meet editors, publishers and agents.

I’d been going to conferences, both local and national, for a few years, and while I got a lot of great feedback and some really fabulous critiques on my writing (not to mention lots of beautiful handwritten rejections!), I hadn’t gotten that golden opportunity you always hear people talking about. I wanted to be the one who walked away from a conference with a sold manuscript!

But that isn’t really the way it happens.

A few years ago I was at an SCBWI conference and I happened to be talking to Miriam Hees, publisher of Blooming Tree Press, about a book I’d been working on. I knew it was a good story, but I couldn’t find the right publisher for it.

She asked me what it was about, and I told her I’d had this idea about all the cats disappearing from a small town.

She loved the idea and said–if you can believe it–she’d actually thought about a story just like it herself! Then she asked me to send it to her.

I’d had editors ask for manuscripts before, so while I was excited, I wasn’t pre-selling copies at my local bookstore just yet.

It took a year of waiting, but I finally got the call. Two years later, the vision we both had for this story has become a reality!

But if I’d never gotten up the nerve to talk to her about my story, Fairview Felines: A Newspaper Mystery, would probably still be sitting my drawer and Thomas Weston would never have had to the chance to share his love of newspapers with the world.

“Whenever I get an idea for a character, a place or a plot twist, I jot it down in a small memo notebook and then keep those next to my computer.” Here’s a peek into the author’s mind! 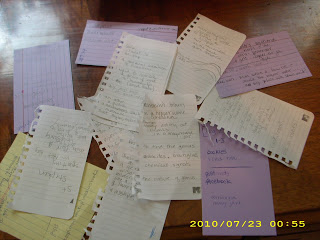 Michele is also the Regional Advisor for SCBWI’s Montana Chapter and conducts writing workshops throughout the year. She is represented by The McVeigh Agency.