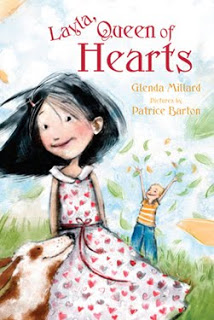 A picture is worth a thousand words. No pressure for an illustrator, right?

Luckily, in chapter books, the author has already supplied the words. So my approach here is to create illustrations that play a supporting role. My pictures must say just enough but no more.

When I was a kid deciding whether or not to read a chapter book, I would fan through it. If the illustrations captured my attention, I would read it.

Okay, fine, truth be told…I still do this. It comes naturally for me as an illustrator to look for an event in each chapter that will make an engaging illustration–one that leaves the viewer with more questions than answers so they will be enticed to read the story.

For example, in one illustration from my chapter book Layla, Queen of Hearts, written by Glenda Millard (FSG, 2010), we see the character Layla. We recognize her because of her long black hair. But oh my, what is she doing in a graveyard? Who is she with? Who are they talking to?

Another illustration from the Layla book has a more subtle example of engaging the reader. We see the family seated around a huge table enjoying a breakfast feast. One empty chair is invitingly pulled out from the table, coaxing the viewer to join them. However, the viewer must read the chapter to discover why the hard-boiled eggs are wearing tiny knit beanies. My pictures must say just enough, but no more.

On the other hand, the illustrations in picture books speak volumes. They must convey the heart of the matter, honoring the author’s perspective.

With picture books, the words are fewer, the audience younger, so the images play a major role fusing seamlessly with the text. 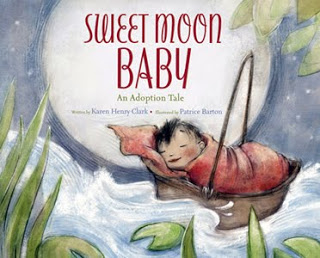 For me, this begins in the sketching phase. I read the text over and over again. As the story seeps in, I begin to sketch–keeping it fluid. Don’t think, feel.

I let the characters and scenes evolve…new layers to the story unfold.

In the picture book Sweet Moon Baby, written by Karen Henry Clark (Knopf, 2010), the author magically brings the story full circle, having it begin and end on a warm summer night. The illustrations needed to reflect this. I wanted them to come full circle too. So I swaddled the baby in a red blanket to begin her journey, and at the story’s end, the red blanket has now become her bedspread.

Again, in Sweet Moon Baby, the baby, tucked in a basket, is being carried away by the river’s strong currant. I drew her literally being swept off the page. To find out where she’s going, the reader has to turn the page.

In closing, I’m reminded of when my son played T-ball.

After a game, his team would gather around and do a big cheer for the other team, for without them, they wouldn’t get to play.

So, cheers to authors! Thank you for sharing your stories, for without you, we illustrators wouldn’t get to play!

3 Replies to “Guest Post: Patrice Barton on the Difference Between Illustrating Picture Books and Chapter Books”