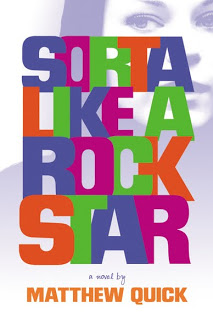 Matthew Quick is the first-time YA author of Sorta Like a Rock Star (Little, Brown, 2010). From the promotion copy:

Amber Appleton lives in a bus. Ever since her mom’s boyfriend kicked them out, Amber, her mom, and her totally loyal dog, Bobby Big Boy (aka Thrice B) have been camped out in the back of Hello Yellow (the school bus her mom drives).

But Amber, the self-proclaimed princess of hope and girl of unyielding optimism, refuses to sweat the bad stuff. Instead, she focuses on bettering the lives of her alcoholic mother and her quirky circle of friends: a glass-ceiling-breaking single mother raising a son diagnosed with autism; Father Chee and The Korean Divas for Christ (soul-singing ESL students); a nihilist octogenarian; a video-game-playing gang of outcasts; and a haiku-writing war vet.

But then a fatal tragedy threatens Amber’s optimism—and her way of life. Can Amber continue to be the princess of hope?

With his zany cast of characters and a heartwarming, inspiring story, debut YA author Matthew Quick builds a beautifully beaten-up world of laughs, loyalty, and hard-earned hope. This world is Amber’s stage, and Amber is, well…she’s sorta like a rock star.

In writing your story, did you find yourself concerned with how to best approach “edgy” behavior on the part of your characters? If so, what were your thoughts, and what did you conclude? Why do you think your decision was the right one?

My protagonist, Amber Appleton, is pretty wholesome, as far as teenagers go. She doesn’t drink or do drugs. She isn’t sexually active. She has a personal relationship with her God. She’s also a free thinker, a nonconformist who isn’t afraid to speak her mind, and a strong-willed independent young woman waving her optimistic worldview like a flag.

Yet, when Amber suffers a horrific tragedy, she sinks into a serious depression for a third of the book, during which she does some understandable but unlikable things, including cursing the people who are trying to save her. She also has very bleak thoughts and even challenges the point of life itself.

Amber asks a lot of philosophical questions about God, the meaning of life, the lot she is given, why good things happen to bad people, etc. These are questions not everyone is comfortable addressing, but Amber explores them honestly, oscillating between reverence and irreverence.

I knew that Amber’s intense personality was going to rankle some readers. She calls Jesus Christ “JC” and “sucka,” but her faith in him is sincere.

When Amber befriends a Vietnam Vet, she calls Jane Fonda a “bitch” and an “old-lady actress,” but it is in an effort to make a deeply wounded man feel supported. Amber also repetitively calls herself a “freak” and the “princess of hope.”

I worried that Amber might be too intense, too raw, too Amber. But I decided that allowing Amber to exist on the page exactly how she came to me creates an emotional vulnerability and honesty that I don’t always see in stories about young people.

Amber is just as weird, strange, flawed, child-like, endearing, and annoying as many of the teenagers I worked with when I was a high school English teacher. I decided that I didn’t want to gussy up her language or attitude for the page.

Part of the growing up process is being sanitized. We learn to suppress our questions, our quirks, our spunk, irreverence, etc.; we learn to fit in. For most kids, this is a simple process usually accomplished by the time they are at the end of high school. Other kids are different. But different doesn’t necessarily mean wrong or bad; sometimes different should be celebrated.

So the “edgy” risk I took was making Amber Appleton a complete weirdo with a good heart. I modeled her after some of my favorite former students who clung onto the ideals of their childhood a little more tightly than the rest.

Some readers have told me that they didn’t like Amber at first because they found her to be too immature and/or quirky, but then after so many pages they grew to love her and were devastated when the post-tragedy Amber gives up and ceases to be herself.

When I hear this, I consider it a victory for tolerance.

I realized that writing Amber’s story in first person, employing such an extremely quirky voice—Amber stocks a ridiculous hodgepodge of catchphrases—would test the curmudgeon’s tolerance. But I wanted to write a book that celebrated people who are different. There are many fantastic unconventional people in this world who will never be labeled “cool” or “hip” or even “appropriate,” but they can still play important beautiful roles in our lives if we let them.

Amber is a freak, a misfit. But if you tolerate her, I believe you will find she is well worth knowing. The best freaks usually are.

As a contemporary fiction writer, how did you find the voice of your first person protagonist? And, if it seemed to come by magic, how would you suggest others tap into that power in their own writing?

But as everyone has different tastes, senses of humor, and—let’s be honest—prejudices too, a writer can never hope to please everyone.

So who should we please?

Who can we please?

I’ve written a lot since I quit teaching in 2004—petty much continually for the last six years. I’ve completed eight novels and abandoned dozens. I’ve only sold three.

The two books I’ve published—The Silver Linings Playbook (FSG, 2008)(published for grown-ups) and Sorta Like a Rock Star—were by far the easiest to write. That’s not to say the writing process was without challenges. But I enjoyed writing those two far more than all of the other unpublished books.

You might be thinking I enjoyed writing the published books because they were ultimately recognized by the powers that be in NYC, but to be absolutely honest, I knew when I was writing that something special was going on—that these two books were the most authentically me.

During the MFA experience, I tried to hone a more literary academic voice that always ended up feeling fake to me. And while I am sure there are people who will say that my published work doesn’t work for them—no book works for every reader—the books I have published really work for me.

My wife—novelist, Alicia Bessette—author of Simply From Scratch (Dutton, 2010)—knows me better than anyone. She is always my first reader. After she has read my draft, I ask her this question first: Is this manuscript authentically me?

If she says yes, it usually means that the book is ready for my agent’s eyes.

Sorta Like a Rock Star is about a seventeen-year-old homeless young woman. I have never been homeless, nor have I ever been a young woman. But the people who know me best say that they can see me in the book. They don’t mean that Amber is a thinly veiled fictional depiction of me, but that she is an authentic product of my personality.

I laughed and cried all through the writing of Sorta Like a Rock Star. I wrote a book that I wanted to read. I believe Toni Morrison once said—and I am paraphrasing here, as I am not able to remember the exact wording of the quote that once hung in my classroom, back when I was teacher—If there’s an unwritten book you want to read, you must write it. That’s what I tried to do with my debut YA book.

[“If there is a book you really want to read, but it hasn’t been written yet, then you must write it.”] 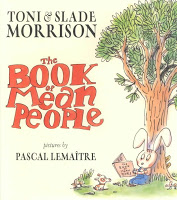 Like Amber, I thought a lot about religious and philosophical questions when I was a teenager. I am sometimes irreverent and sometimes extremely reverent. I’ve always been a free thinker. I have a quirky sense of humor. I like befriending unlikely people. I like using language to exert my personal independence, even when I know people might think I am weird.

I am not Amber Appleton, but Amber Appleton is made from the stuff that I know and love. She is an authentic extension of me, and her voice reflects that.

I’m always telling young writers to write about the things they love, and that’s what I tried to do with this book.

So, in short, get out of your own way. Don’t self censor. Get to know yourself. Write a book you will love. Allow the voice to emerge from within. Don’t force it. Word.

Visit Quest for Kindess, a blog by Alicia Bessette and Matthew Quick.