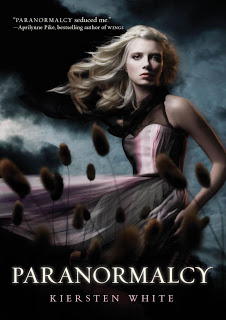 Kiersten White is the first-time author of Paranormalcy (HarperTeen, 2010)(author blog). From the promotional copy:

Evie’s always thought of herself as a normal teenager, even though she works for the International Paranormal Containment Agency, her ex-boyfriend is a faerie, she’s falling for a shape-shifter, and she’s the only person who can see through paranormals’ glamours.

But Evie’s about to realize that she may very well be at the center of a dark faerie prophecy promising destruction to all paranormal creatures.

So much for normal.

I never set out to write with themes in mind, but somehow they always seep into my writing so that, by the time I have a finished draft, it’s very obvious what was on my mind.

Since I write for teens, I slip into my teen mindset, which leaves my main characters grappling with the big questions I had as a teenager. How could I fit in and be special at the same time? Was everyone else as lonely and confused as me? Who was I, and who did I want to become? How do I deal with this rampaging gremlin without getting its acid saliva on myself?

Wait. Scratch that last one.

Isolation also tends to be a big recurring element in my novels, because for me being a teenager was an intensely lonely time. I had friends—great friends—but that didn’t stop me from worrying that no one really knew me and that, if they did, they might not like me anymore.

In Paranormalcy, I pumped this up even more. Not only does Evie not have any teenage friends because she lives in an inaccessible government center, but even more isolating, she doesn’t know much about herself. It’s hard enough figuring out who you are in life even when you know where you came from (and what, exactly, you are, although I doubt many of us grapple with that particular question!).

My favorite thing about writing paranormal/urban fantasy is that so many of the different things I employ function as perfect metaphors for teenagers. A shapeshifter worries that if people saw the real him they would reject him, so he doesn’t let anyone get close. His friends like him, girls like him, but he can’t ever accept it as true because they don’t see who he really is. Evie, who can see through anything, can’t see herself for what she really is, and doesn’t want to. She’s so desperate to be normal, to conform to this idea she has in her head of what normal is, she stops seeing the complexities of the world around her and where she fits in it. And that, really, it’s okay not to know quite where you fit, as long as you’re happy where you are.

I think this is vital, because you can write the coolest creatures/world setup/fantasy elements possible, but if people don’t relate to the characters there’s no point. I hope that what makes my characters unusual makes them even more accessible and relatable.

In the end, I think it’s important to note that I never set out to make my characters metaphors. Can you imagine? “And now for the love interest, who will be a metaphor for man’s search for meaning in a cold universe!”

Heavens no. I write my characters as people. They supply the issues themselves. It’s a great system! And that’s what’s important—themes and ideas and issues are fabulous, as long as they supplement and enrich the story instead of taking away or distracting from it.

If you are at all aware of my book or me, you may have noticed something.

You can find me online.

Really! In fact, I think you’d be harder pressed not to find me online. I am everywhere… (Please imagine that sentence said in a creepy whisper with a slightly maniacal grin.)

And somehow this public persona–this issue of an author or aspiring writer needing to have a platform and be a networking genius and have a blog and a website and twitter and Facebook and Goodreads and whatever else is the next absolute must have online social media–has become the norm. So much so that the other day when I searched for a debut author online and found nothing I thought, What’s wrong with her?

Umm, nothing. Nothing is wrong with her. She’s just opted out of having an online presence. And honestly? I think that’s okay. We have a lot of pressure coming from all ends. I can’t tell you how many times panicked writers have asked me how they can get people to read their blogs, how they can build readership, because don’t editors and agents look for that?

Well, they don’t hate it, it’s true. And if you do manage to have a large readership, awesome! But I think that unless you genuinely enjoy it and can manage to have an appealing or entertaining online presence (like this little blog you may have heard of, I think it’s called Cynsations?), there’s really no point.

Have an attractive, professional website and call it good. Blogging and twitter can be a huge time-suck, so if you can’t balance it with your writing time, don’t bother. Your writing is what will get you a book deal, not how many followers your blog has.

Sometimes I like to imagine which historical authors I think would have been active in social media. I can see Jane Austen with a thoughtful, clever, and incredibly verbose blog, but she would post infrequently. Charles Dickens would have been all over twitter. J.D. Salinger would have…still been a slightly crazy recluse.

But here’s what’s different about publishing in 2010. That stuff is out there, and yes, there’s an expectation that you are going to be doing it. I obviously haven’t struggled with it, but that’s because I’ve been blogging daily for three years now. (And let’s face it, I enjoy being an idiot on Twitter. I’m bored. It’s funny. See how it all comes back to me and what I like doing?)

Has my online presence been a boon to my career? I’m going to say, yes. But I suppose only time will tell for sure. But more importantly: do I enjoy doing it? Yes, absolutely.

Will I always be as accessible as I’ve been until now? Probably not. The more readers paying attention to my blog, the more I shy away from exposing certain aspects of myself on it. The more emails I get taking time away from writing, the more I lean toward declining requests I would have accepted even a couple of months ago.

This is the reality of now. Communication is so easy, so instant, that it’s easy to get overwhelmed with it. I’m still trying to find the balance, but I suspect it will always be changing. And that’s okay.

Check out the book trailer for Paranormalcy:

and a video interview with Kiersten: