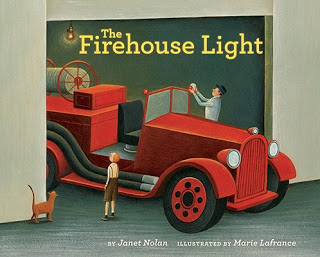 Day after day,
year after year,
the lightbulb did not burn out.

The Firehouse Light, illustrated by Marie Lafrance (Tricycle Press, 2010), is the true story of a lightbulb that has been burning in a firehouse for more than one hundred years.

When I first learned there was a lightbulb in Livermore, California that had been burning since 1901, I was intrigued.

I wondered how it was possible, when almost nothing seems to last, that a lightbulb never burned out. For days, I walked around thinking wow, while that lightbulb’s been burning, cars were invented, and so were telephones, televisions, and computers. Cures for diseases were discovered, wars were fought, and roads, highways, and cities built.

And while so much changed culturally, socially, technologically, and economically in American society, a tiny four-watt bulb, made of carbon filament and hand-blown glass, kept burning.

Who couldn’t be intrigued by that?

I just had to know more.

One of the wonderful things about being a children’s writer, is that I have the perfect excuse to pick-up the phone, call a stranger, and say, “I wonder if you have a moment to talk.”

I was lucky to find so many helpful individuals on the other end of the line. Through the amazing generosity of local historians, retired firefighters, and members of the Livermore Heritage Guild, who answered my endless questions, I was able to learn the lightbulb’s story.

It all began in 1901, when fires were fought with bucket brigades and hand-pulled hose carts. The lightbulb, a gift from a local businessman, was placed inside a wooden shack where firefighters stored their equipment. If a fire broke out at night, the lightbulb helped them find their equipment in the dark.

There is a passage in the book that reads, “Beneath a lightbulb that glowed strong and steady, firefighters stepped into their big boots, pulled on their heavy coats, put thick helmets on their heads and switched on their two-way radios. They drove through the growing town’s only traffic signal, honking the horn.”

While the language is simple, the research to verify specific details was extensive. Were the boots thick? Were the coats heavy? What type of communication was used? When, exactly, did Livermore install its first traffic signal?

Details are not only delicious, they tell the bigger story. The installation of a traffic signal in a post-war town represents the impact of cars, and it illustrates a community on the verge of growth and expansion.

The lightbulb no longer hangs in a wooden shack. Today, fifteen feet about the ground, the lightbulb burns inside a state-of-the-art firehouse. Only now, it has its own back-up generator, webcam, website, and thousands of dedicated fans from all around the world.

I am proud to be one of its fans! 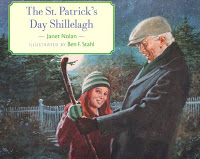