Clay Smith is the literary director of the Texas Book Festival. A former journalist, he works for the Sundance Film Festival when not planning the lineup of writers appearing at the Book Festival.

The Texas Book Festival is scheduled for Oct. 16 and Oct. 17 at the state capitol building in Austin.

What was the spark that first led to the creation of the Texas Book Festival?

Former First Lady Laura Bush, and a group of interested volunteers founded the Festival to highlight some of the most accomplished Texas authors and to raise money for Texas Public Libraries.

The Texas Book Festival’s mission is to celebrate authors and their contributions to the culture of literacy, ideas and imagination.

How has it grown and changed over the years?

The first Book Festival had about 40 authors and focused primarily on Texas authors.

This year the Book Festival will feature more than 200 renowned Texas and national authors.

The organization has grown significantly in 15 years. Now, there is year-round programming that also includes grants to Texas public libraries, literacy outreach to economically disadvantaged (Title 1) schools in Central and South Texas, a Fiction Writing Contest for children and author events and happenings.

There is a tidal wave of technological changes having a monumental impact on the book publishing industry right now. The Texas Book Festival integrated eBook technology into Festival activities through a Future of Reading panel last year, and TBF is committed to keeping a place in the Festival for the discussion of new technologies and how they are shaping and changing the publishing industry as we know it. TBF will be a resource for both readers and authors as they adjust to these changes.

What programming is especially geared to young readers and/or children’s-YA literature enthusiasts of all ages?

Here are some of the children/YA authors who will present at the 2010 Texas Book Festival:

o Allie Finkle’s Rules for Girls: Blast from the Past, Book Six by Meg Cabot (Scholastic, 2010);

o What Can You Do with a Paleta?/ ¿Qué puedes hacer con una paleta? by Carmen Tafolla (Tricycle Press, 2010);

How about young writers?

The Texas Book Festival holds a Fiction Writing Contest with the UIL (University Interscholastic League) for 7-12 grade students. Winners of the contest are rewarded with a trip to Austin to present their works at the Book Festival. The contest encourages development of writing skills.

In what ways does the festival benefit schools and libraries?

The Texas Book Festival, since it started, has contributed $2.5 million dollars in grants to Texas public libraries, reaching over 600 libraries in 400 cities.

Through the Reading Rock Stars program, the Texas Book Festival has reached out to economically disadvantaged schools in Central and South Texas, reaching more than 30,000 children with this literacy outreach program.

What about the festival first attracted you?

I had been on the Festival’s author selection committee when I was the book editor at the Austin Chronicle, and left Austin in 2002 to attend the Cultural Reporting & Criticism program in NYU’s journalism school.

Just as I finished that program, I heard that the Festival’s programming job was open and applied. I thought the job would be an interesting way to be involved in publishing, but not have to live in New York, and it seemed really exciting to me to cook up lots of cool author events (and it has been!). By the way, I didn’t know very much about kid’s books before I started this job, and a lot of people have taught me along the way.

What is the organizational/staff structure?

Could you describe the preparation that goes into each festival?

From a programming standpoint, most of the year is spent thinking about the kinds of books that are being published in any given year and which writers we think would be ideal for the Festival. It’s not just me selecting the books – there’s an author-selection committee for the adult program and one for the kid’s program.

The spring and summer are spent inviting the writers and figuring out how to place them in the program, and the months right before the Festival I spend on logistical work – making the Festival happen.

Additionally, there is literally an army of volunteers, around 1,000 people who work to pull the many moving parts of the Festival together.

With 200+ authors participating, and 40,000 visitors, there are hundreds and hundreds of people working together to make the experience an amazing literary celebration.

The Festival has authors and discussions for all ages and areas of interest, cooking demonstrations, children’s activities and entertainment, musical entertainment and some of the best local food.

How long have you been with the festival?

I love it that we’re presenting the newest, hottest ideas in American thought every year – for free! – to the public. We create one big conversation for Texans about what’s going on in our world, and new ways to think about it, and I think that’s an invaluable event for everyone to be a part of. We connect writers and readers in a really vital way, and connect readers with other readers in a big two-day party.

Could you share with us a couple of festival memories?

It’s nice when someone famous, like then-Senator Obama, comes to the Festival, but I’m really happy when lesser-known writers have a full crowd of people waiting to hear what they have to say, so I always remember the sessions that don’t have “famous” writers but nonetheless are full. In fact, sometimes the sessions are so full the fire marshal gets a little upset.

How can folks get involved with and/or otherwise support the festival?

The Texas Book Festival has a membership program. For a minimum contribution of $50, members are invited to exclusive author events, receive priority seating and get the latest TBF news.

Additionally, folks could become involved with the Festival by volunteering. There are more than 1,000 volunteers needed each year to produce the festival. To join as a member or sign up as a volunteer, go to: texasbookfestival.org.

What can we expect from the 2011 Texas Book Festival?

Lots of books about race this year, lots of “manly” books – books about war, manhunts for famous criminals (like Al Capone). Lots of vampire books – the Festival will have a sampling of good books in almost every genre published this year.

What changes will there be from previous years?

You might want to get to the Capitol a little early this year if one of the writers you want to see is appearing in the Capitol – the Capitol installed metal detectors this year, although by all reports, people are getting into the Capitol quickly.

You can also use the East, North, and West doors, since there will probably be smaller lines at those doors even though every entrance to the Capitol has metal detectors.

What is your vision for the future of the festival?

I want the Festival to continue to bring Texas’ and the country’s best writers to Texans for free.

More personally, what are some of your favorite new releases of the past year?

You would have to put some truth serum into me for me to answer that question – all of our writers have gone through a rigorous selection process, so they all have something really interesting to say.

What do you do outside of the world of books?

I read a lot and I do a little bit of freelance journalism. I take care of two kooky dogs and spend time my two kooky nephews. 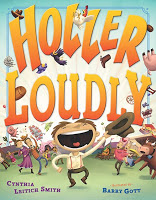 I’m honored to be among the 2010 Festival Authors scheduled to appear at the 15th annual Texas Book Festival Oct. 16 and Oct. 17 at the State Capitol Building in Austin.