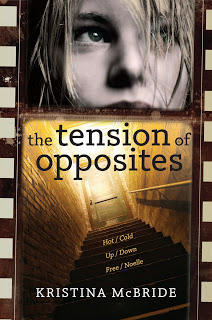 Kristina McBride is the first-time author of The Tension of Opposites (Egmont, 2010)(author blog). From the promotional copy:

When Tessa’s best friend Noelle disappears right before the start of eighth grade, Tessa’s life changes completely–she shies away from her other friends and stops eating in the cafeteria.

Now, two years later, Noelle has escaped her captivity and is coming home–in one piece but not exactly intact and definitely different.

Tessa’s life is about to change again as she tries to revive the best friendship the two girls had shared before Noelle–now Elle–was kidnapped; puts up a futile resistance to the charming new guy at school; pursues her passion for photography while trying to build the bravado to show her photos to the public; and tries to balance her desire to protect and shelter Elle with the necessity to live her own life and put herself first.

The Tension of Opposites opens with a scene where sixteen-year-old Tessa McMullen learns that her best friend, Noelle, who was kidnapped two years ago, has just been found. Alive.

Tessa–who spent the entire two years that Noelle was missing in a state of isolation, avoiding everything life had to offer because of her deep sense of survivor’s guilt–couldn’t be considered “edgy” if she tried. So, in the case of my main character, I didn’t have much to be concerned about. At least, that was my original thought.

Then Tessa meets Max, the new, totally hot guy in her photography class. She likes him, more than she wants to admit, but her main focus is reconnecting with Noelle.

As I wrote further and further into the story, I realized that Tessa is a normal teenager with normal desires. Which led me into some scenes where I wasn’t sure how far to go.

I think the key was staying in Tessa’s head, trying to remain true to her character, and keeping myself from forcing her to act in a way that just wasn’t her style.

Noelle, on the other hand, has always been a little wild. Before the kidnapping, she was obsessed with boys and did what she needed to gain their attention. Tessa assumes that when Noelle returns, she’ll be more subdued. But Tessa realizes very quickly that her assumptions are all wrong.

As a writer, I was concerned about several situations Noelle (who returns insisting she be called “Elle”) gets herself into.

My main struggle came about when I considered the real-life stories of children who were kidnapped and months or years later reunited with their families (think: Elizabeth Smart, Shawn Hornbeck, Jaycee Duggard).

It was very important to me that I tread lightly in regard to Elle’s behavior. I did not want to cheapen the struggles others have actually gone through, or make the public think these kids returned home and started to raise all kinds of trouble.

The children we’ve learned about through the media deserve the utmost respect for the strength and fortitude they posses. It was important to me that I find a way to write this book without disrespecting them in any way. I can only hope that I have achieved my goal in that regard.

That said, I also had to be true to the story I was trying to tell. And that meant writing Elle into some pretty edgy situations. It was hard for me to see her self-destructive behavior, but I couldn’t very well ignore the natural direction her character decided to take.

When I try to manhandle my characters–forcing them to act the way I want them to–they retaliate and it’s never pretty. So I listened and I watched and I wrote. Because, as an author, that’s really all I can do. 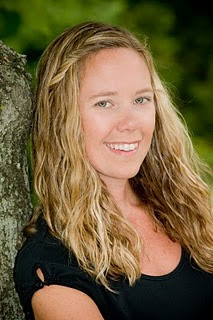 For me, it’s kind of like magic. Usually, when I “meet” my characters, it’s like we’re hanging out in a room together, chatting, and they feel safe telling me all their secrets.

Then they kind of meld into my subconscious. I’m not exactly sure how it happens, so the only thing I can suggest for others as far as tapping into that power in their own writing is to simply set aside some time to think.

If it doesn’t come naturally, some might find it helpful to journal a conversation with a main character.

As a writer, I have all kinds of crazy questions for my characters. Writing them down and waiting for answers can work very well.

But now for the details. Here’s how it worked for me with my debut novel.

The main character in The Tension of Opposites, sixteen-year-old Tessa McMullen, simply started speaking to me one day after I watched an interview Oprah conducted with an extraordinary young man who had just been returned to his family after a four-year abduction.

Tessa spoke to me as if she were a friend (or maybe a former student–I taught high school English for eight years), telling me the story about how her best friend, Noelle, had been kidnapped one day from their neighborhood park.

Even though Tessa wasn’t actually present during the kidnapping, she felt an enormous sense of survivor’s guilt. It didn’t help that she was the one who found Noelle’s abandoned bike on the sidewalk, and became the first person to realize something was very wrong.

Tessa responded to the tragedy by alienating herself from the world, refusing to live a life Noelle could not be a part of. Being with friends, laughing, noticing boys–all of it felt like a betrayal. So she stopped. The only guilty pleasure she allowed herself was her passion for photography, which worked because it was a solitary activity.

Then Tessa told me that, after two years, Noelle had been found alive, and was coming home. Tessa was nervous to meet her friend after so much time had passed, and scared to think about how much Noelle might have changed. She wondered about what the kidnapper had done to Noelle and worried that, when they were reunited, she would say all the wrong things. Tessa was overwhelmingly nervous to see her friend after everything that had happened, but excited too, to regain her lost friendship.

All of this came to me in a huge wave. It nearly knocked me off my feet, and my hands couldn’t keep up as I brainstormed Tessa’s side of the story. But there was a problem. I was only learning Tessa’s story.

I waited and waited for Noelle’s voice to speak up. And then I started to force her. Which, I might add, is never a good idea.

As an author, my struggle came when I tried to push Tessa–this very vocal and emotional character–away. I figured I should try to write this book from the perspective of the kidnapped-and-returned girl, Noelle. It was, after all, her story, right?

A few times, I attempted to write the novel from Noelle’s perspective, but it was like sitting in a dark room. She had nothing to say. No matter what I tried, she remained silent.

Turns out I was wrong to ignore Tessa. Very wrong.

The Tension of Opposites is all about Tessa’s conflicts – how she pushed people away the entire two years her friend was missing, how she tries to reconnect with the distant and self-destructive girl that returns home, how she attempts to open up to the new guy in her photography class (who–no matter how much she tries to ignore the simple fact–is totally hot!), and, ultimately, how she struggles with the knowledge that, though Noelle has returned, Tessa may never really reconnect with her best friend.

I’m so glad Tessa didn’t get angry with me and storm away when I first ignored her. Because without her, The Tension of Opposites would most certainly be an incomplete file in my computer’s hard drive.

Kristina McBride is a debut author who lives with her family in Centerville, Ohio. A high school English teacher and yearbook advisor, Kristina wrote The Tension of Opposites in response to the abduction and safe return of eleven-year-old Shawn Hornbeck, who in 2002, was kidnapped while riding his bike to a friend’s house.