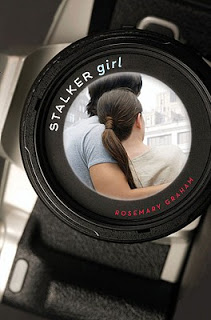 Last week someone sent me a link to an article about The Breakup 2.0: Disconnecting over New Media (Cornell University Press, 2010), a new book by communications professor Ilana Gershon.

Among her findings, Professor Gershon reports that after a breakup, a certain amount Facebook stalking is considered normal among the generation that’s come of age with social media. College students readily admitted to repeatedly checking the Facebook pages of their exes, noting every new friend, every status update.

They did it regardless of which one of them had initiated the breakup, and they described it as compulsive but rarely satisfying behavior.

My new novel, Stalker Girl (Viking, 2010), tells the story of Carly, a girl who engages in the “normal” activity of on-line stalking, but with a twist and with legal as well as unforeseen psychological consequences.

Instead of compulsively checking on her ex, a musician named Brian, she becomes fascinated with his new love interest. Online, this new girl–Taylor Deen—seems perfect. She’s pretty, of course. She comes from a well-known, arty New York family and wins awards for her own photography. After learning all this through the Internet, Carly decides she needs to see this perfect girl herself.

As in, live and in-person.

As in, donning a disguise and casing out the girl’s neighborhood.

All she wants is a glimpse. But that one glimpse of Taylor—laughing it up in a West Village café with her mother—isn’t enough. Soon Carly is following Taylor around the streets of Manhattan. She knows what she’s doing is beyond normal. And she knows she should stop. But she can’t.

Carly’s suffering an extreme case of what I think of as the “Greener Grass Syndrome,” the false belief that your life would be perfect if you had . . . fill in the blank: the cute boy, the cool mom, the great house. To some extent, we all do this. (Right?) But in Carly’s case, with all this information at her fingertips, things get out of hand quickly.

A while ago, I sat in a friend’s backyard debating with other parents about whether today’s teens experience more social pressure than we did when we were growing up.

At first I argued no. After all, we agonized about our thighs, our hair, our clothes. We compared ourselves to the coolerthinnerricherhappier kids. We were just as miserable!

But then I thought about the book I’d just written, where a girl’s obsessive behavior is maybe not caused by social media, but certainly intensified by it.

And I thought back to when I was seventeen and my first boyfriend broke up with me. I spent the day in bed, smoking cigarettes and tearing through Ordinary People [by Judith Guest (Viking, 1976)].

Putting aside the cigarettes (and I did, a long time ago!) my reaction was a fairly healthy one. I threw myself into a book. An appropriately weepy book that I read cover to cover in one day.

But if access to my now-ex-first-boyfriend’s life had been available to me simply by turning on a computer or phone, I probably would have spent that day (and others after) obsessively clicking and watching and waiting, prolonging and exacerbating the pain.

You’ll have to read Stalker Girl to find out what happens to Carly. But I will share one thing. Early in the book Carly discovers “the worst thing” that results from her behavior.

She tried conjuring up her favorite memory from her summer with Brian . . . Now when she thought about that night—how afterward they lay side by side, watching the sky change from pink and orange to deep, dark blue—she saw Taylor in her place.

It was like she’d been deleted from her own memory.

In an odd way, today I find myself treasuring the memory of that lonely day I spent in bed reading Ordinary People and wondering if anyone would ever kiss me again. That weepy novel assuaged my pain by bringing me deep inside someone else’s.

In the perpetual present tense of social media, there is no deep inside. And someone else is always prettierricherthinnerhappier.

Rosemary Graham is a professor of English and creative writing at Saint Mary’s College of California. She lives with her family in Berkeley, California.