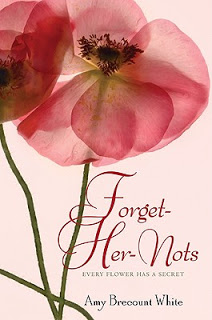 Amy Brecount White is the first-time author of Forget-Her-Nots (Greenwillow, 2010). From the promotional copy:

Something—some power—is blooming inside Laurel. She can use flowers to do things. Like bringing back lost memories. Or helping her friends ace tests. Or making people fall in love.

Laurel suspects her newfound ability has something to do with an ancient family secret, one that her mother meant to share with Laurel when the time was right. But then time ran out.

Clues and signs and secret messages seem to be all around Laurel at Avondale School, where her mother had also boarded as a student.

Can Laurel piece everything together quickly enough to control her power, which is growing more potent every day?

Or will she set the stage for the most lovestruck, infamous prom in the history of the school?

I read everything I could get my hands on and always checked out the maximum number of books from the library! My days were filled with Encyclopedia Brown [by Donald J. Sobel (1963-)], Betsy Byars, Madeleine L’Engle, and even Harlequin romances. I’ve never felt complete unless I’m in the middle of or looking forward to a book.

Later in high school, I was steered into the classics and fell in love with Dickens, Jane Austen, and some Russian novelists. I like to think of my tastes as eclectic, although definitely preferring fiction.

When I thought about my audience for Forget-Her-Nots, I wrote for the girl that I was: someone with endless curiosity about the world who wanted to come away from the last page of a book with more than she started.

So, I gave my readers something that most of them have never encountered before–the language of flowers. Many of them have already told me that they don’t look at flowers in quite the same way anymore. I love books that help me connect with the world in a new and creative way. I hope I’ve inspired readers to do that with mine.

As a magic realism writer, how did you go about building your world? 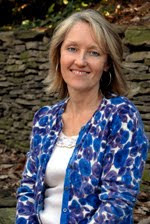 The world of the Avondale School was tremendously fun to build. The fictional girls school was constructed in the Victorian period (in the U.S.), but it’s also set in Charlottesville where I used to live.

So the campus is a wonderful combination of a mysterious, Gothic-type conservatory and neoclassical buildings, like those on the campus of the University of Virginia.

I gave the school a rich history of strong women and fascinating traditions, such as the May Day maypole dance.

Laurel’s school had to have extensive gardens that she could wander through and explore her gift, but it’s also a modern campus with soccer fields, a dining hall, and a quad with Frisbees zipping across.

Charlottesville has a climate with a long spring and fall — plenty of time for lots of flowers to show off. Most of the novel takes place in the spring, and I did do a lot of research and observation to make sure that I got the bloom times correct.

I also did a lot of research on the language of flowers and human/flower relations throughout history. The Avondale campus is a place where the language comes vibrantly and unpredictably alive, so the campus seems to reverberate with myths, poems, and stories about flowers.

I had so much fun creating the gardens and conservatory in particular, that I’d love to revisit the campus in a companion novel to Forget-Her-Nots and already have some ideas rooting.

Amy Brecount White has taught English literature and writing to middle school and high school students. She has written numerous articles and essays for publications such as the Washington Post, but Forget-Her-Nots is her first novel.

She can often be found in her garden and gives flowers to her friends and family whenever she can, though none have had magical effects—yet.